The Palestinian dancer who was locked away

Lina Khattab, an 18-year-old dancer and university student, tells Al-Monitor about her ordeal when Israeli forces arrested her and says she hopes she can show the world the suffering of the Palestinians. 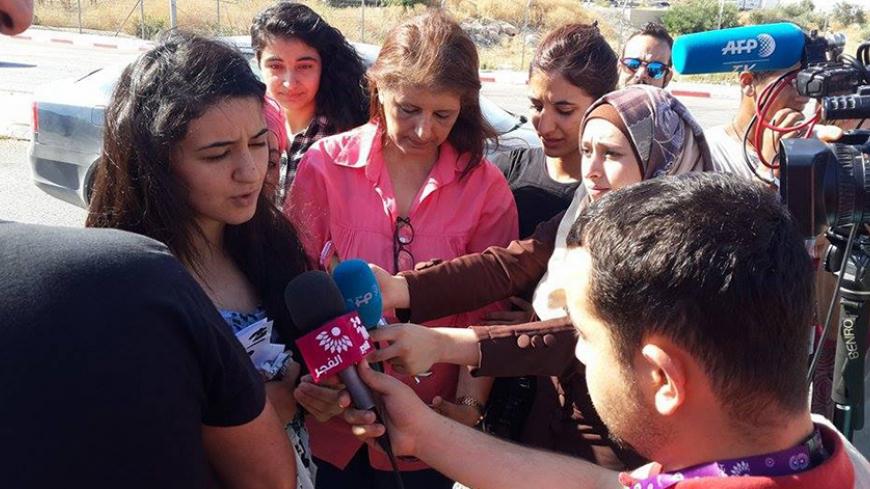 Lina Khattab, a journalism student at Birzeit University and folkloric dancer, speaks to the media after being released from an Israeli prison, in the West Bank, June 11, 2015. - Facebook.com/Free Lina Khattab

RAMALLAH, West Bank — Lina Khattab is a journalism student at Birzeit University and a dancer in the El-Funoun Palestinian Popular Dance Troupe. Her release from an Israeli prison June 11 represented an important transitional phase of her life, as her experience in detention changed her personality and her perception of the future.

Yet, prison did not break Khattab’s spirit. During her imprisonment, she learned Hebrew and silk bead embroidery from other prisoners. She has pieces of her work displayed in her living room. In return, she taught her fellow prisoners some dabke moves.

Khattab said she was arrested and was severely beaten and abused near Ofer prison, west of Ramallah.

Khattab told Al-Monitor, “Two soldiers attacked me with their hands and feet. They dragged me to a military jeep, where two other soldiers were waiting, and they all kept on beating me until we reached the Ofer prison.”

“When we arrived, they took me out of the Jeep and threatened to kill me. One of the four soldiers spoke Arabic. I was led to a small room, where I was inspected and interrogated. I was tied to an iron chair. My clothes were ragged and my hands were bleeding. I spent two hours there, before they took me to an investigation center I was not familiar with,” she added.

In the investigation center, Khattab was placed in “a cold cell underground,” according to her account. She said she was interrogated by two conscripts in the Shin Bet, a man and a woman. The interrogation started at 3 p.m. Dec. 13 (the day she was arrested) and lasted until the early morning the following day.

She was accused of throwing stones, breaking a Jeep window and injuring a soldier in the head.

“I denied all the charges. I refused to cooperate with them and did not tell them that I was beaten up when arrested, as I feared they would use it to pressure me or to hit again in the same place,” she said.

Khattab’s suffering continued as she was moved to Hasharon prison in the early morning hours of Dec. 14 when the investigation was over. She said she was held in solitary confinement for two days, and did not go the toilet or eat anything for two days. She said she refused to cooperate with the medical clinic.

“I refused to cooperate with the medical clinic as I feared that they would use it against me, although my right hand was hurting me. I could not open it or close it. My knee and back were also hurting because of the soldiers’ blows. Bruises were all over my body,” she said.

“The cell was too small. It had an iron bed and a bathroom open to the room, as well as a surveillance camera in the corner. That is why I could not go to the toilet. Often, the sewage water would leak out of the cell floor and the room would be filled with a very unpleasant smell, and there was no ventilation, which made me feel nauseated. I was trying to escape reality by not thinking or trying to sleep for a few moments,” she added.

After spending two days in the cell, Khattab was moved to wing 2 of the Hasharon prison, where she was welcomed by the female Palestinian prisoners. She said, “They gave me a warm welcome, as well as clothes instead of the torn ones I was wearing. They made food and gave me the confidence and strength I needed.”

According to Khattab, wing 2 of the Hasharon prison consists of “six small cells for 22 female prisoners. The cells are separated by a small alley leading to detention cells for Israeli female civilians, who spend their time shouting and insulting us. The cells’ windows are very small and closed with iron, where we can barely tell day from night.”

Khattab said that the female prisoners suffer in the prisoners’ transport vehicle, which has a bad smell, is tight, very hot in summer and very cold in winter. The female prisoners are taken out of their cells at 3 a.m. when they have a court session and brought back at 11 p.m. They are given just one meal on court days. This is added to the small waiting room at the courts, where female prisoners wait for a long period of time, and where there is no bathroom. Moreover, there is no female health worker at the medical clinic. There is only a one male nurse who mistreats female prisoners and only provides them with painkillers.

Khattab added, “We spend most of the time talking to each other, learning silk bead embroidery or reading some of the limited [available] books.” She noted that at the end of each month, there is one day where the female prisoners perform. Khattab was always keen to perform a dabke dance or a theatrical scene. This encouraged some female prisoners to learn dabke.

On the impact that the prison has left on her personality, Khattab said, “While in prison, I used to miss everything outside. At that time, I realized what it means to be free and have hope.”

After her detention experience, Khattab plans to complete her bachelor's degree in journalism and a master's degree in human rights or international law to shout out the voice of the oppressed Palestinians to the world. She said, “The most important achievement of my life will be to have the chance to shout out to the world even the voice of one Palestinian child who is suffering under the occupation.”