One month after the United States announced its recognition of Jerusalem as the capital of Israel, the arrest of Palestinian children by Israeli police has risen. 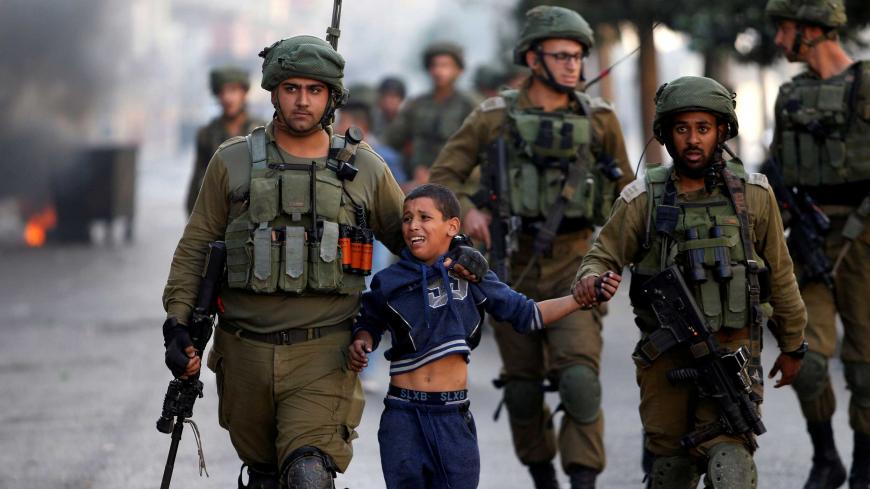 On the way to visit his aunt, 16-year-old Fawzi al-Juneidi was captured by Israeli forces in Hebron. He said he was severely beaten and taken to a nearby military watchtower with blood pouring from his face, placed in an outdoor fenced room and made to sit on the ground in cold water in the December chill. “They poured cold water on my feet, as I had lost my shoes when they arrested me. They were standing on my legs and feet, leaving cuts all over my body,” Juneidi told Al-Monitor within days of his release from 22 days in prison. Juneidi said that as a result of the beatings he endured from the time of his arrest, his shoulder was fractured.

After a day of various transfers between police stations, Juneidi was taken to Ofer, an Israeli prison in the West Bank, where he was finally allowed to access an Israeli hospital. “While I was in the hospital, the soldiers threatened that if I didn’t admit to throwing stones they would beat me up. They continually said bad words to me and cursed me,” Juneidi said.

Walking to his aunt’s house, Juneidi had to cross an area in Hebron where there were clashes between young Palestinians and Israeli forces in the aftermath of US President Donald Trump’s Jerusalem announcement. “Soldiers aren’t out in this area during the day if there are no clashes. But because of the protests they surrounded the area and trapped the youths,” Juneidi said.

The number of child arrests has substantially increased in the month following Trump's recognition of Jerusalem as the capital of Israel. Ayed Abu Eqtaish, the accountability program director of Defense for Children International – Palestine (DCIP), told Al-Monitor that between Dec. 6 and Dec. 19, 77 children under the age of 18 had been imprisoned, double the numbers from the previous month.

The PLO’s prisoners' affairs commission said in a report released at the end of December that the youth arrests were concentrated in Hebron, Bethlehem and Jerusalem. The commission said that Israeli forces particularly targeted young “men and boys under the ages of 18” and that dozens of youths detained in Ofer were “subject to barbaric attacks and brutality during their detention and interrogation process.”

Juneidi said that during his time in Ofer Prison, the guards would come in the middle of the night and wake him up by banging on the cell door with their guns. The boy was unable to see his family for four days, until he was brought to a military court for the first time Dec. 11. A DCIP report said Juneidi “was interrogated without the presence of a lawyer or family member and was allowed access to legal consultation following — not prior to — his interrogation.”

According to the DCIP, Juneidi is one of 700 Palestinian children to be detained every year and prosecuted in Israeli military courts while lacking fair trial rights and protection.

Juneidi was released from prison Dec. 28 after his family paid a fine of 10,000 Israeli shekels (roughly $2,900). “I was sure I was going to be released because my family was standing with me,” Juneidi said. He said he still suffers psychologically: “When I’m sleeping, I always have a dream or nightmare about the arrest.”

The photo of Juneidi being dragged by 22 Israeli Border Police quickly went viral after his arrest. Abu Eqtaish said the way Juneidi was arrested backs up what human rights organizations are claiming. “We believe all children are exposed to the same practices,” Abu Eqtaish said.

In Halhul, a village north of Hebron, 15-year-old Asala Abu Rayyan was shot in the hand with a rubber bullet fired by Israeli Border Police during a protest against the planned US Embassy move. After being injured, she and her 17-year-old cousin Manar Abu Rayyan wanted to leave the demonstration and receive medical attention from the Red Crescent Society. As the ambulance they were in was driving off, Israeli forces blocked the way, opened the door and detained the two girls.

“I tried to resist and hit one of the soldiers on the shoulder,” Asala told Al-Monitor. “I was pulled out, [the soldier] pulled off my hijab and hit my head against the jeep.” Both girls were handcuffed and placed in separate jeeps and taken to the closest military watchtower for three hours before being transferred to the Jabara police station in the Kiryat Arba settlement that most of the world sees as illegal. “They tried to force us to say we were throwing stones,” Manar said.

In the police station, the cousins were not allowed to talk with each other. “They mocked us a lot and called us lots of bad names. If we spoke, they would come and hit us on the head, sending pain down our backs, as we sat on the ground,” Manar said.

Asala said, “They put us in a container, which was open at the bottom. It was super cold.”

Asala’s mother, Nora Abu Rayyan, tried to visit the girls when she was informed of their arrest Dec. 13, but was told to leave by Israeli forces. “I kept thinking I would not be able to see my family or go to school anymore,” Asala said. The investigators told the girls they would be detained for at least four more days.

Nora Abu Rayyan went to the civil administration, the Israeli governing body in the West Bank, in an attempt to get her daughter out of detention. “We were lucky the soldiers dropped part of their weapons in the ambulance [when they were arresting the girls] — the sniper scope and stand,” Nora Abu Rayyan said. The weapon parts left in the ambulance proved the soldiers had taken the girls from the van. “They’re not allowed to attack an ambulance, why would they do that?” Asala said. The family was therefore able to arrange an exchange with the civil administration, giving back Israeli property in return for the girls' release from Jabara on Dec. 14.

“I’m thankful to God that I'm with my family again and can go back to school. When I saw what they did to Fawzi, I feel thankful that I’m out,” Asala added.

Her mother concluded, “I’m proud of my daughter; she didn’t do anything wrong. She is defending her country and Al-Aqsa [Mosque]. It’s the right of every Palestinian child. It’s something to be proud of."