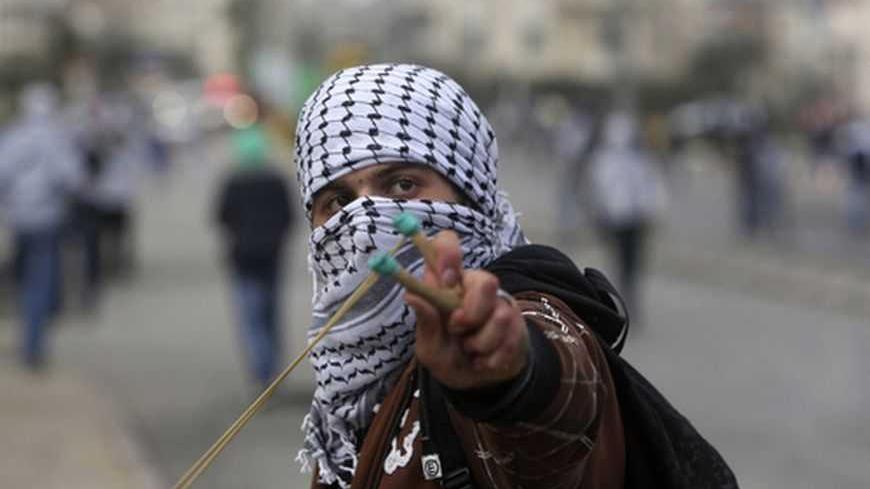 A Palestinian uses a slingshot to hurl a stone toward Israeli troops during clashes outside Israel's Ofer military prison near the West Bank city of Ramallah, Feb. 28, 2013. - REUTERS/Mohamad Torokman

The death of 30-year-old Arafat Jaradat in Israel’s Megiddo prison on Feb. 23 sparked widespread protests in the West Bank and Gaza Strip.

A team of forensic doctors, including Dr. Saber Al-Aloul, a Palestinian, performed the autopsy at 10 a.m. the following day at Tel Aviv’s Abu Kbeer Institute. Members of Jaradat’s family were also present.

Contrary to Israel’s initial declaration that Jaradat died of a heart attack, the autopsy revealed that he was in fact tortured to death under interrogation.

Abu Mohammed, Jaradat’s father, told the media that he collapsed after seeing his son’s body.

“He had bruises all over his body, on his chest and back,” Abu Mohammed said. “His back was full of contusions, some of his ribs were broken as well, and the back of head was swollen. There was dried blood on his face from his nostrils, and his lips were lacerated.”

Minister of Prisoner Affairs Issa Qaraqe confirmed in a press conference on Sunday that Jaradat was killed under torture and held Israel responsible for his death, declaring that Israel will not be able to fool the world by hiding this criminal act that only certifies that the use of torture is routine for Palestinian prisoners.

Jaradat, who worked at a gas station, was arrested on Feb. 18 for throwing a rock at an Israeli soldier in November last year in the wake of Israel’s military offensive on Gaza. He was also accused of belonging to the Al-Aqsa Martyrs’ Brigade, Fatah’s armed wing. He was interrogated first at the Jalameh prison complex, before being transferred to Megiddo prison.

The father of two — 3-year-old Yara and 2-year-old Mohammed, with his wife four months pregnant — was arrested from his village of Sa’ir in Hebron just before dawn. His wife, Dalal, recounted that the Israeli intelligence officer brought her husband back to his front door a few minutes after he was arrested to “say goodbye to your wife and children.”

“We heard Arafat screaming in pain as the soldiers began beating him after they took him away,” Abu Mohammed reported. “I tried to go after them but one soldier pointed his gun at my chest and told me to get inside the house. Arafat’s screams filled the air the same time as the call for dawn prayer sounded.”

According to the Palestinian Central Bureau of Statistics, 203 Palestinian prisoners have died in Israeli captivity, including dozens who died after their release by a few days, weeks, or months due to medical negligence sustained inside the prisons. Seventy-one prisoners died as a result of torture inside Israeli prisons, 51 out of medical negligence, and 74 murdered intentionally after their arrests. The remaining seven were shot with gunfire inside the prisons. Seven prisoners have died in Megiddo prison since 1989.

Jaradat’s death was received with mass demonstrations in Hebron, Gaza, Huwara checkpoint just before Nablus, and in front of Ofer prison in Beitunia, Ramallah. Tens of thousands flocked to Sa’ir where Jaradat was laid to rest, with an unusual appearance by masked members of Al-Aqsa Brigades, who fired live ammunition in the air.

In Bethlehem, the Israeli army shot two youths: 15-year-old Odai Sarhan was shot in the head with a rubber bullet and immediately transferred to Hadasah hospital in Jerusalem, while 13-year-old Mohammed al Kirdi was shot with live ammunition in his foot and back, and is said to be in a stable but serious condition.

Ma’an News Agency reported that 14 people in Tulkarem were injured lightly from rubber bullets and tear-gas canisters. Additionally, as hundreds of protesters — mostly students from Birzeit University — demonstrated in front of Ofer prison, at least one person was shot in the leg by live ammunition, with 6 others sustaining injuries from rubber bullets and dozens more treated for tear-gas inhalation.

Sheikh Khader Adnan told Israel Pulse’s Shlomi Eldar last week in an interview that Palestinians are no longer silent about the plight of the prisoners.

“There has been a reawakening in the Palestinian street, and a deep sense of identification with the prisoners’ struggle. It is like a new intifada. Last Friday, for example, there were demonstrations in Huwara, Issawiya, Ofer Prison, Budrus, al-Arroub, Kalandia, Bil’in, Nabi Salih, and Ya’bad. People came out to demonstrate on behalf of the prisoners in every one of these places,” he said.

Yet talks or fears of a third intifada, widespread in international and local media, are premature and exaggerated. Intifadas are uprisings that are characterized, among other things, by sustainability, and are not confined to reactionary protests and short-lived direct confrontations with the Israeli occupation army.

The real intifada, however, is one that is barely mentioned by mainstream media and downright ignored by the international community — the hunger strikes of the Palestinian prisoners in Israeli jails.

Kick-started by Adnan’s 66 day hunger strike last year, individual hunger strikes followed suit and managed to pressure Israel into an agreement to release the administrative detainees undertaking these acts. The culmination was a 28-day mass hunger strike, which saw an end to solitary confinement (except for one prisoner, Dirar Abu Sisi), family visits to prisoners from Gaza, and improved conditions.

As a response to Jaradat’s murder, thousands of prisoners observed a one-day hunger strike, with Megiddo prison extending their strike to three days. Other prisoners have announced their own hunger strikes, such as Younes al-Huroub and Hazem Tawil, both administrative detainees. The longest serving prisoner in Israeli jails, Maher Younis, 54, began his hunger strike on Feb. 24 to draw attention to the necessary release of the 109 prisoners jailed before the Oslo Accords were signed in 1993.

The number of hunger strikers has risen to 10, after long-term strikers Ja’far Ezzedine and Tareq Qa’dan suspended their 93-day fast until March 6, where the Israeli military prosecutor will decide whether to renew their administrative detention.

Israeli prison authorities have on their part reacted with aggressive force toward the prisoners. According to Al-Quds newspaper, armed units raided Division 10 in Eshel prison, confiscating electronic devices such as televisions and radios, and beating the prisoners up after they refused to comply with being strip searched. Division 3 in Asqalan prison was also raided, with the armed units destroying personal belongings of the prisoners.

Translating the prisoners’ movement and fortitude onto the Palestinian street has been viewed as a minor reflection of the events that take place behind Israeli bars. The large demonstrations only come into effect once political officials, either PA or Hamas in the West Bank and Gaza Strip respectively, call for them — the same officials that have ignored Samer Issawi and Ayman Sharawneh’s 8-month hunger strike up until last month.

For now, it is up to the Palestinian people to see if they can protest without the strings tied to the disappointing Palestinian leadership, and whether that will transform into a fully fledged popular uprising against the Israeli occupation in its entirety.