Linah Alsaafin speaks to the mother of four Palestinian detainees, a woman who refuses to give up hope even with "nonexistent" support from the Palestinian Authority officials to families of prisoners. 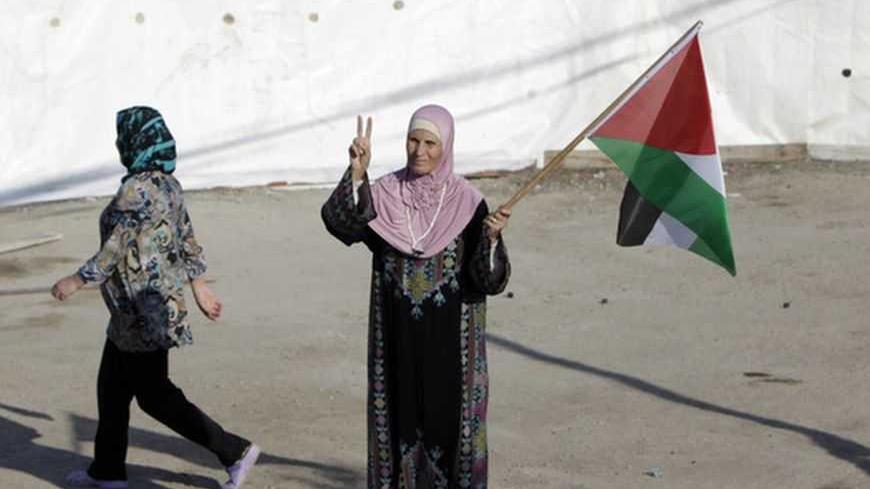 Rukia, the mother-in-law of Palestinian prisoner Ibtisam Issawi, holds a flag outside her home in the Arab East Jerusalem neighborhood of Jabal Mukaber Oct. 17, 2011. - REUTERS/Ammar Awad

As the hunger strikes of Ayman Sharawneh, Samer Issawi, Tareq Qa’dan and Ja’far Ezzedine continue, protests in support of the prisoners have increased, bringing more attention to their plight. The stories of other Palestinian prisoners and their families, so often reduced to numbers and statistics, are rife with pain and hope.

In a small dark house on the outskirts of the al-Am’ari refugee camp in Ramallah resides Latifa Abu Hmeid, known as the Khansaa of Palestine — a name given to a woman as a testament to the pain and suffering she endures with dignity.

Known also as Umm Nasser, the 68-year-old mother of 12 has had seven of her sons all imprisoned in Israeli jails at once, her house demolished twice by the Israeli army and one of her sons, Abdel-Min’im, killed by soldiers at the Qalandiya checkpoint.

“Abdel-Min’im was killed in 1994,” Umm Nasser began. “He prayed the Friday prayers at the Aqsa Mosque in Jerusalem and made his way back to al-Am’ari, but a unit had been following his moves since he finished praying and followed him to Qalandiya, where they shot and wounded him.”

Known as the Shabak (Israeli secret police) Hunter, Abdel-Min’im fooled Israeli intelligence agents into thinking he was a double agent working for them. They believed him when he informed them that he had names of Palestinian spies gathering information on the Israeli government.

“The intelligence officers were thrilled to know Abdel-Min’im was a spy for them, or so they thought,” Umm Nasser says. “They even offered him sweets. Our family is well known for resisting the occupation, so they considered his confession the ultimate betrayal to the Palestinian cause.”

On Feb. 13, 1994 Abdel-Min’im shot and killed Israeli intelligence chief Noam Cohen at the military headquarters in Beitunia, northwest of Ramallah.

A few months later on the last day in May, as Abdel-Min’im lay bleeding on the ground, the Israeli unit who had followed him from Jerusalem then pumped 150 bullets into Abdel-Min’im’s face with no hesitation.

After collective punishment increased to alarming levels during the First Intifada, it was routine for the Israeli army, after killing Abdel-Min’im, to waste no time in demolishing the Abu Hmeid family home in the refugee camp. The soldiers were very brutal, beating up members of the family and pushing them around.

“I was eight months pregnant when they came to demolish my home for the first time,” Umm Nasser said. “I had a miscarriage after the soldiers hit me.”

During the Second Intifada in 2002, four of her sons were arrested in the space of a week.

Nasser has been arrested ten times in his lifetime, with his first arrest at the age of 12. Along with his brother Nasr, they lived in hiding and moved back and forth from Ramallah to Issawiyah, a village in east Jerusalem. Nasser and Nasr were affiliated with Fatah and active in its armed wing, the Al-Aqsa Martyrs Brigade. They were arrested from inside a house in the Qalandiya refugee camp on April 22, 2002 after exchanging fire with the Israeli army for more than an hour.

At their trial, the brothers refused to recognize the legitimacy of the Israeli military court and rejected representation by a lawyer. The court sentenced Nasser to seven life sentences plus 50 years, and Nasr to five life sentences, after accusing them of possessing weapons and planning suicide bombings, which are referred to by Palestinians as martyrdom operations.

Once again, after the arrests, the Israeli army demolished the Abu Hmeid family home for the second time.

A week later, Sharif was arrested at the Beitunia checkpoint following days of confrontations with the Israeli army. A member of the preventative security forces, Sharif was sentenced to four life sentences before he was able to marry his fiancée, who is still waiting for his release to this day. Sharif is now 33.

Mohammed was 18 when he was arrested and accused of assisting in suicide bombings. He owned a poultry shop in the al-Am’ari refugee camp, and after living in hiding for a few weeks, he was eventually captured with the help of Palestinian collaborators who set up an ambush in central Ramallah. Mohammed, now 28, is serving to two life sentences plus 30 years.

When asked about the 2011 prisoner-exchange deal between Hamas and Israel were, which saw 1027 Palestinian prisoners and one Israeli soldier released, Umm Nasser's stern expression momentarily slips, and sorrow and pain flood her face.

“We had so much hope that at least one of my sons would be released, seeing how I have four all given multiple life sentences. But it wasn’t meant to be.”

She refuses to give up hope, though. “A true believer never loses faith, and I am certain I will see my sons out of prison in the near future,” she stated.

Umm Nasser was denied visits with her sons for the first five years of their imprisonment, for what Israel called “security reasons.” In January of 2013, she and her blind husband, Hajj Mohammed Yousef Abu Hmeid, were allowed to visit their four sons, who are all held in Asqalan prison, together in one room for the first time.

“My husband was denied seeing our boys for 11 years. Of course, he couldn’t actually see them because he lost his sight, but a parent can always see their children with their heart.”

Hajj Mohammed burst into tears as he was momentarily reunited with his four sons, something that Umm Nasser, who doesn’t invite sympathy, disapproved of.

“I told him to stop crying, because I didn’t want the Israeli guards to gloat in our misery,” she explained roughly.

Support from the Palestinian Authority officials to families of prisoners is nonexistent, according to Umm Nasser.

“They only come whenever there are cameras and media around,” she said. “The families who have their children locked up by Israel feel like everyone has forsaken them. There is no support, not even on holidays or other occasions. Maybe every year or two they visit us to give us a wooden plaque as they briefly recognize our pain, but that’s about it.”

Most of Umm Nasser’s sons are affiliated with Fatah, with only Abdel-Min’im belonging to Hamas. Yet she does not hold any expectations for the role that political parties are supposed to play, as the Palestinian leadership itself is not willing to act on its duty and busies itself with conceding more of the Palestinian peoples’ rights and land.

“Abbas has been saying that he will only return to negotiating with Israel once there is a settlement freeze,” scoffs Umm Nasser, who is from the ethnically cleansed village of Sawafir, north of Gaza. “Before that it was to remove all of the settlements. What this leadership has forgotten is that the West Bank and Gaza Strip are not Palestine, they are part of it. The 48 territories, the Naqab desert, the Galilee — these are also Palestinian land.”