Reports of beatings and torture by PA security forces are common, but there is no follow up or accountability, reports Linah Alsaafin. 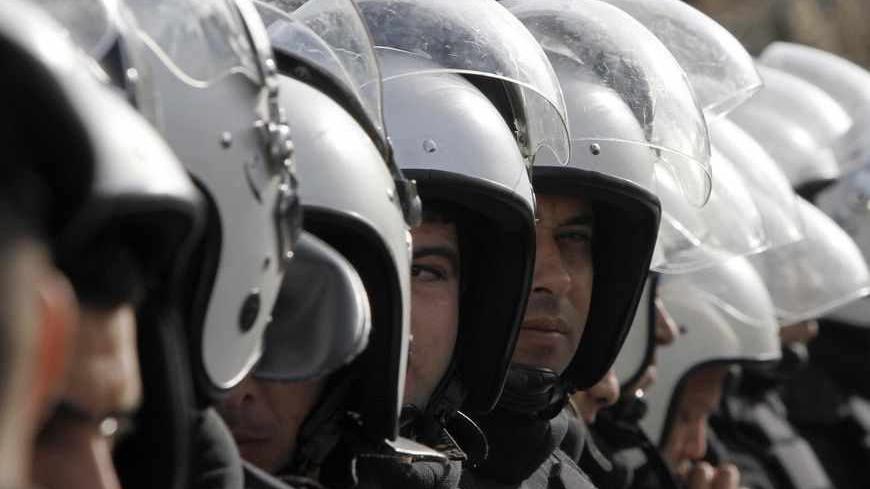 Father of eight Mohammed Ghannam lost his ability to speak after less than 48 hours in the custody of the Palestinian Authority Preventative Security Forces.

Ghannam, 43, who works as a muezzin (crier responsible for calls to prayer) for the Ministry of Religious Endowment, was previously arrested three times by the Israeli occupation and twice by the Palestinian Authority (PA). The second time he was arrested by the PA, he was released after two weeks, only to be arrested again the same day by the Israeli army, which sentenced him to 25 months based on his political affiliation. He was released in October 2012.

Speaking to Al-Monitor by phone from the Hebron village of Tarama, Ghannam’s brother (who declined to share his name for the interview, citing fear of arrest by either Israel or the PA) recounted that the Preventative Security Forces called him Saturday morning, April 27, to tell him that Mohammed was under arrest, without giving a reason for it, but also likely for allegedly being linked to Hamas.

They came half an hour later to where Mohammed was working and transferred him directly from the Dura PPS offices to the headquarters in Hebron. Mohammed’s brother tried to send him clothes, but the officers refused to let the brother see him.

Mohammed relayed what happened next in his own writing. After his transfer to the security services headquarters in Hebron, five officers surrounded him, with one identifying himself as the chief negotiator. The five men allegedly began beating Mohammed severely on his neck, chest and back, with the chief negotiator allegedly banging Mohammed's head on the concrete wall at least five times before he lost consciousness.

He was taken to Alia Hospital at around midnight, registered under the name of “detainee” in the hospital records and after half an hour was taken back to prison.

In his written statement to the Palestine Center for Human Rights, Mohammed says: “The next morning, I realized that I was having difficulty speaking. As a result, they took me to the hospital again. I tried to describe to the doctors what had happened to me by writing on paper, but they refused, and asked me to speak out. They conducted some medical tests and sent me back to the prison.”

Mohammed was released on Sunday afternoon. His brother went to pick him up, and was told by the officer in charge that Mohammed was suffering from injuries that occurred in his past when he used to play soccer.

“Mohammed hasn’t played soccer for 15 years,” his brother said. “He used to play for local clubs, but we knew his loss of speech was as a result of torture by the security forces.”

The Ghannam family took Mohammed to neurologist Dr. Emad Talahma, who informed them that Mohammed’s condition is known as partial epilepsy.

Mohammed’s wife Suhaila told Al-Monitor that the hospital refused to give them his medical records, and the Preventative Security Forces banned the media from contacting Mohammed while he was in the hospital room.

“We decided that it would be best if my husband recuperated at home, surrounded by his family,” Suhaila said. “When he went to take a shower, we saw his entire back and chest completely bruised and blue.”

The Ghannam family is suing the PA military intelligence through the prisoner-rights group Addameer.

“This isn’t something that should be ignored,” Suhaila stated. “We’re prepared to enter a legal battle with the responsible parties to bring about accountability.”

The Palestine Papers, thousands of US State Department documents published by Wikileaks in January 2011, revealed that the British government plays a significant role in equipping, training and funding the Palestinian Authority security services. The London-based Arab Organization for Human Rights published a report in December 2012 illustrating that between the years 2007 and 2011, over 13,000 Palestinians were arrested by the PA, with 96% undergoing torture. As a result, six Palestinians died.

Musa Abu Dheim, a lawyer for the Independent Commission for Human Rights (ICHR) says that torture in PA prisons has been present since the establishment of the PA and escalated during the division between Hamas and Fatah in 2007.

Following the civil infighting, “There’s been a drop in torture cases, but it is still present and carried out by the security forces of both the PA in the West Bank and Hamas in Gaza,” he said. “The main reason for its continuance is due to the lack of serious accountability procedures, even though Palestinian law clearly states that perpetuators of torture must be punished and that torture is illegal.”

Abu Dheim points to the public prosecution as one of the parties responsible to bring accountability, in addition to the political standing of Palestinian parties.

“The torture carried out today is mostly done by individuals, and not as a systematic policy,” he added. “There’s also a lack of awareness on behalf of these individuals on what torture is. In their opinion, if a detainee does not die, then this does not classify as torture, even with other measures being used, such as sleep deprivation and painful stress positions, for example.”

When asked about tortured detainees who seek reparations after their release, Abu Dheim says that this is not a common occurrence, as medical reports that state the former detainee was tortured are hard to obtain from government hospitals.

As for Mohammed, his family prays that his condition is temporary and that he will regain his speech soon.