Accusations have resurfaced against security forces in the West Bank, blaming them for using torture in their prisons and detention centers against detainees for political reasons. 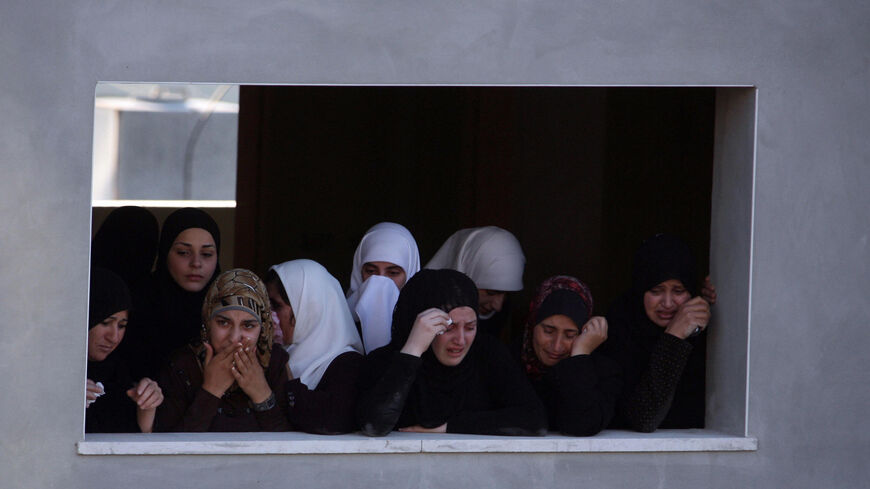 Palestinian women mourn the death of Hamas movement activist Fadi Hamadneh who died inside a Palestinian Authority (PA) prison two days ago during his funeral in the West Bank village of Assira Shamaliya near Nablus on Aug. 12, 2009. Security officials said Hamadneh "committed suicide" while Hamas insisted in a statement he died following "brutal torture." - JAAFAR ASHTIYEH/AFP via Getty Images

RAMALLAH, West Bank — Hamas accused security forces in the West Bank of escalating “political detention crimes based on political opinions or resistance to the occupation.” In a statement released June 14, Hamas said the arrests were coupled with “atrocious torture and inhuman treatment denigrating detainees and their families.”

Hamas condemned “the cheap methods of the PA security apparatus in fabricating lies and stories against detainees for exposed ends that our people will not believe.” Hamas fully blamed “the influential PA leadership for these ongoing abuses, calling on it to immediately release all detainees.”

The Palestinian police also announced June 6 that there was an explosion inside a carpentry workshop in Beitounia that caused material damage but no casualties; the police proceeded with their inquiries and shut down the workshop. They did not mention the owner’s identity, and the Explosives Ordinance Disposal Authority and civil defense were tasked with preparing the necessary reports and inspecting the place.

Official authorities did not issue any statement about the results of the explosion, but security forces launched a wave of arrests in the aftermath. Social media pages close to the Palestinian Authority (PA) claimed that the detainees were involved in preparing a plan to target the PA in Ramallah and officers in the security services and posted pictures and maps it said had been seized. When corroborating the information and photos, some turned out to be invalid.

Al-Monitor tried to contact the spokesperson for the Palestinian security services, Talal Dweikat, for comment on the reports about the arrests and torture. But he did not answer our calls. Meanwhile, the security services did not issue any public statement on the arrests or the results of the investigation into the explosion. Of note, the PA’s security forces often deny carrying out any political arrests in the West Bank.

Lawyer Ahmed Harish, 28, was arrested by security forces on June 6 while driving his vehicle with his pregnant wife in Ramallah. The reason for his arrest has not been disclosed.

His sister, Asmaa Harish, told Al-Monitor, “Security forces kidnapped Ahmed from his vehicle while he was on his way home with his wife after they were shopping for their newborn, whom they were expecting weeks later.”

She said her other brother Mohammed was arrested two hours later in front of the family house.

Harish said, “Ahmed appeared, a day after his arrest, before the Ramallah Magistrate's Court, which decided to extend his detention for seven days, at which point he announced his hunger and water strike, blaming the PA for anything that might happen to him and risk his life." He was later transferred to the city of Jericho.”

She added, “Ahmed was brought before the court in Jericho again on June 13 and they renewed his detention until June 28. But signs of torture and fatigue were evident on his body.”

“When I saw Ahmed, I started calling him to look at me, but he was not able to. After several attempts, he barely nodded to indicate that he heard my voice,” she said, noting that her brother revealed to the judge that he had been tortured. Despite that, and despite the lawyer’s objection, the judge agreed to extend his detention upon the Public Prosecution’s request.”

Asmaa said Ahmed was tortured on his hands and feet and it was clearly visible. He was also subject to the shabeh technique (suspending detainees from their wrists) for long hours, and his eyes were permanently blindfolded, noting that there is no clear accusation against him. The same applies to her brother Mohammed, who was released on June 23.

The frequency of political arrests in the West Bank has increased in the past few days, with the deadlock in national reconciliation and the increased Hamas presence after the victory of many of its members in the local council elections as well as its student arm in the Birzeit University elections.

Lawyer Muhannad Karajah, director of Lawyers for Justice, told Al-Monitor that the group is following the cases of at least 15 political detainees in the West Bank. He pointed out that on June 23, the detention of 10 detainees was extended in Hebron, Jericho, Qalqilya, Nablus, Bethlehem and Ramallah, in addition to other detainees whose cases are being handled by other institutions or lawyers.

Karajah noted that political arrests have been on the rise recently, especially after the Birzeit University elections that were coupled with the escalation of political discourse between Hamas and the PA, which was directly reflected in the political arrests.

He pointed out that the investigations with the detainees are related to their activities and political opinions, and their activities in the local elections in the West Bank months ago in which Hamas figures won some seats, as was the case in Qalqilya.

Karajah confirmed that cases of torture of some detainees were detected and documented in the Public Prosecution’s records or after their release. Ahmed Harish was one of the tortured detainees who explained to the judge the methods of torture he was subjected to and the conditions of detention. There are dozens of other cases, but those subject to torture refuse to talk about their experience for fear of re-arrest.

Regarding the connection between the arrests and investigations and the Beitunia explosion, Karajah said, “Until this moment, according to the investigations that have taken place, what is being circulated is incorrect. The prosecution is still investigating, and so far it has not confirmed any of these accusations against the detainees.”

For his part, Gandhi al-Rabei, head of the Right to Law Advocacy and Consultation group and the lawyer for the family of the slain dissident Nizar Banat, told Al-Monitor that torture in the PA’s prisons has never stopped, according to the detainees’ accounts of the torture and ill treatment they endured.

Rabei noted the complete absence of oversight in Palestine, as there is no supervisory body that has official authority. This ensures a favorable environment for suppressing freedoms and the system of rights in Palestine, not to mention that all powers are in the hands of the president, who appoints them.

Concerning the international agreements signed by the PA, including The Convention against Torture and Other Cruel, Inhuman or Degrading Treatment or Punishment, he said, "This is all for show and it has no value. If it had any value, Banat would not have died at the hands of the security apparatus. The PA’s talk about international agreements has no real impact on treatment of citizens.”