Family of Palestinian activist appeals to ICC to probe death

One and a half years after his death, the family of Palestinian political and opposition activist Niza Banat filed the first complaint against the Palestinian Authority before the International Criminal Court, accusing the security services of killing Banat. 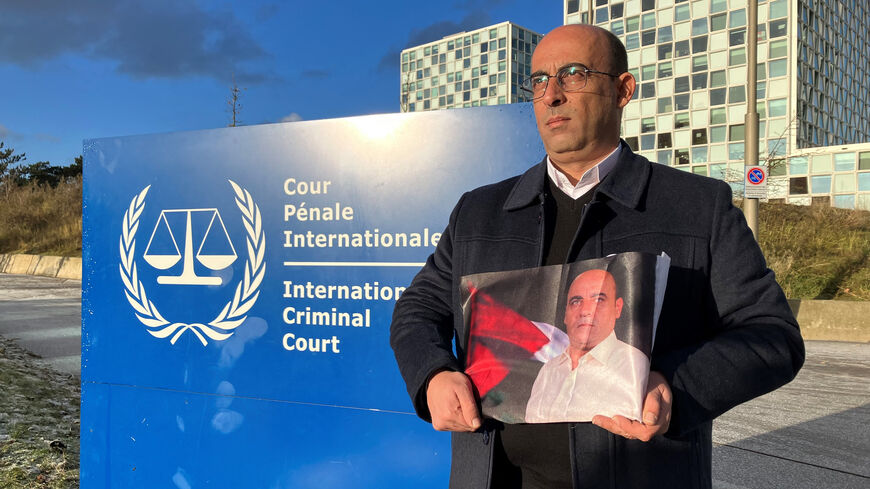 Ghassan Banat holds a picture of his brother, late Palestinian activist Nizar Banat, outside the International Criminal Court, after submitting a case accusing top Palestinian officials over his death in custody, The Hague, Netherlands, December 2022. - Danny Kemp/AFP via Getty Images

RAMALLAH, West Bank — More than a year after the killing of Palestinian political activist and government critic Nizar Banat while in the custody of Palestinian Authority (PA) security forces, the activist’s family has lodged the case at the International Criminal Court (ICC), in the first such move against another Palestinian party before the court.

Last week, Banat’s family filed a case with the Office of the Prosecutor of the ICC in The Hague, through Hakan Camuz, head of the International Law Department at the Stoke White law firm in London, accusing the Palestinian security forces of being behind his killing on June 24, 2021.

Ghassan Banat, Nizar’s brother, who is following up on the case in The Hague, told Al-Monitor that the family took this step to ask the ICC chief prosecutor — Karim Khan — to investigate the killing of their relative and prosecute all those responsible, after losing confidence in the Palestinian judiciary’s independence.

Banat said that he appeared before the court in The Hague, and that “the ICC is our hope for a nonpoliticized investigation and prosecution of criminals.”

“When my brother was assassinated, he was one of the most prominent pro-opposition figures. He was killed just for telling the truth about this corrupt and authoritarian regime,” he noted.

“The way they killed him reflects the level of impunity and moral corruption of this regime. This is the reason for our demand that the European Union stop funding the PA, as Nizar used to call for when he was alive,” he added.

Banat was one of the most prominent pro-opposition figures and a leading critic of the PA. He was also a candidate for the 2021 elections that President Mahmoud Abbas had unilaterally postponed.

He was arrested on more than eight occasions, and his family was subjected to severe persecution during the months preceding his assassination, they say, with their house being under fire and attacked with grenades on several instances.

On June 24, 2021, PA security forces raided Banat’s home in Hebron, in the southern West Bank, and severely beat him. Shortly after his arrest, he was pronounced dead by the security forces, who claimed that his health had deteriorated before he passed away at a government hospital.

Banat's brother pointed out that the family wanted to internationalize the case because of the PA’s actions. “The PA set up a military court to look into the case, which is a kind of cover-up for the crime,” he said. “The family provided all the information it possessed to the military court, but the other side did not provide anything over the course of a year.”

He stressed that the PA does not want a fair trial nor does it want to achieve justice, but rather it seeks a cover-up for the crime. He added, “Therefore we decided to resort to the ICC to try the PA over a clear and full-fledged crime.”

“The PA could have achieved justice and closed the case in a short period of time, but it didn’t,” he said, noting that the Palestinian court has already released the security officers accused of killing Nizar. “They continue to lead their lives normally as if nothing happened."

Back in September 2021, the PA announced the arrest of 14 members of the security forces who were allegedly involved in the beating of Banat before his death. The accused were released in June this year.

“We believe that the international community should assume its responsibility, as it contributed to the establishment of this political system [in reference to the PA] and supported it with funds,” Banat's brother said.

He noted, “The aid money should have been used to build an independent entity for the Palestinian people, not to kill people.” He said that the ICC accepted the family’s request.

“We are waiting for the lawyer to see what additional files and reports they need in order to carry on with the case,” he added.

Banat stressed that the family will not limit themselves to the ICC only, but will go as far as to “filing cases with all European countries whose jurisdiction allows for filing a lawsuit against the PA.”

He pointed out that the complaint submitted to the ICC implicates seven prominent leaders in the PA’s Preventive Security Service, including Abbas in his capacity as supreme commander-in-chief of the armed forces, and Mohammad Shtayyeh, who was holding the position of interior minister when Banat was killed.