Although the Palestinian government has ordered an investigation, some have questioned whether it will be serious and if anyone will be held responsible. 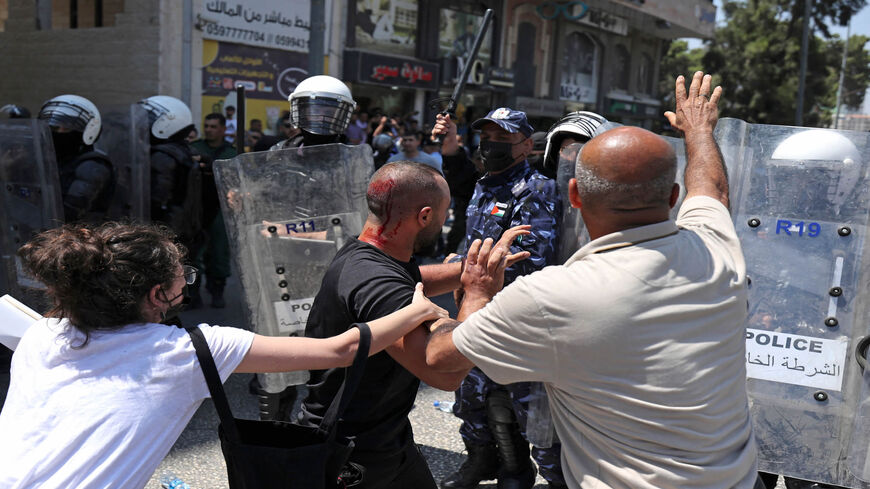 Nizar Banat, a 44-year-old carpenter who has publicly complained about the corruption of the Palestinian leadership, was awoken at 3 a.m. on June 24 by about 20 members of the Palestinian security forces, his family claims. He was dragged from his bed after being pepper-sprayed. His family says he was bleeding when they took him away. Banat, whose house was shot at two months ago, had been in hiding when arrested.

Banat was sleeping at the home of a relative near Al-Ibrahimi Mosque, which is in the H2 area under the direct security control of the Israeli security forces, which means that the Palestinian security forces needed to get Israeli permission to carry out their mission, according to Waleed Omari, the bureau chief of Al Jazeera in Jerusalem.

In a brief statement, the Hebron governorate said Banat’s “health deteriorated” when Palestinian forces went to arrest him early on June 24. It said he was taken to a hospital where he was later pronounced dead. A Palestinian coroner issued a statement later in the day saying Banat had died due to “blows to the body including to the head, chest, and lower and upper parts of his body.”

Ammar al-Dwaik, director-general of the Independent Commission for Human Rights, told the press June 24 that the death of Banat “was not natural,” and demanded that a criminal investigation be launched, the emergency regulations instituted due to the coronavirus be canceled and all prisoners of conscious be released.

AMAN, the Palestinian Coalition for Accountability and Integrity, issued a statement calling the excessive use of force during the arrest “a flagrant violation of the human rights and dignity of Palestinian citizens and provisions of the Palestinian Basic Law.” AMAN called for the investigation committee to “gain approval of the victim’s family” and the need to “publish the results of the inquiry with all due transparency to the Palestinian public.”

A number of leading Palestinian individuals and organizations issued strong statements and an impromptu demonstration took place in Ramallah with the protesters chanting, “The people want to bring down the regime,” in reference to the presidency of Mahmoud Abbas who earlier had postponed elections. The demonstration was broken up violently by Palestinian security forces, but a demonstration at a later time was held without intervention.

Sari Nusseibeh, former president of Al-Quds University and one of the leaders of the first intifada, recalled in a Facebook post that the intifada had called for the combination of the resistance to the occupation and the struggle for Palestinian dignity. He told Al-Monitor that the very least expected from a national authority is to protect the dignity of citizens and their basic freedoms. “The people don’t expect from the authority to liberate Palestine or accomplish the right of return, but they do expect from ‘the authority’ to respect its true master that is the people.”

Dimitri Diliani, spokesman of the Democratic Reform Current, told Al-Monitor that a look at the background of the case shows grave constitutional violations by the Palestinian security service. "[Banat] was threatened a number of times and the timing and method of arrest are a crime for which the presidency, the security forces and the attorney-general are responsible. This was a premeditated crime," he said.

Salah Zuheika a Jerusalem-based journalist and former member of the Arab Journalists Union, told Al-Monitor that the crime committed against Banat is a black spot. He said, “This is an attack on the right of expression and everyone who ordered or carried out this crime must be held responsible.”

Palestinian Prime Minister Mohammad Shtayyeh has ordered the establishment of an investigation commission that will include human rights organizations, according to senior Palestinian security official Talal Dweikat.

The European Union has stated that they were shocked to hear of the death of Banat, saying, “We are shocked and saddened by the death of the activist and former candidate for the legislative elections.” The EU called for a complete, independent and transparent investigation.

Some Palestinians have questioned whether the investigation will be serious and if anyone will be held responsible, especially those who ordered the arrest of the Palestinian government critic.

Ahmad Budeiri, a personal friend of Banat, wrote on his Facebook that Shtayyeh can’t create a commission that will investigate the security forces, because he is also the minister of interior who is directly responsible for the security service.

The response to the death of Banat appears to have been a spark that has lit protests both in the streets and on social media.