The Palestinian Authority is continuing its crackdown against activist and opposition voices despite condemnation by rights groups. 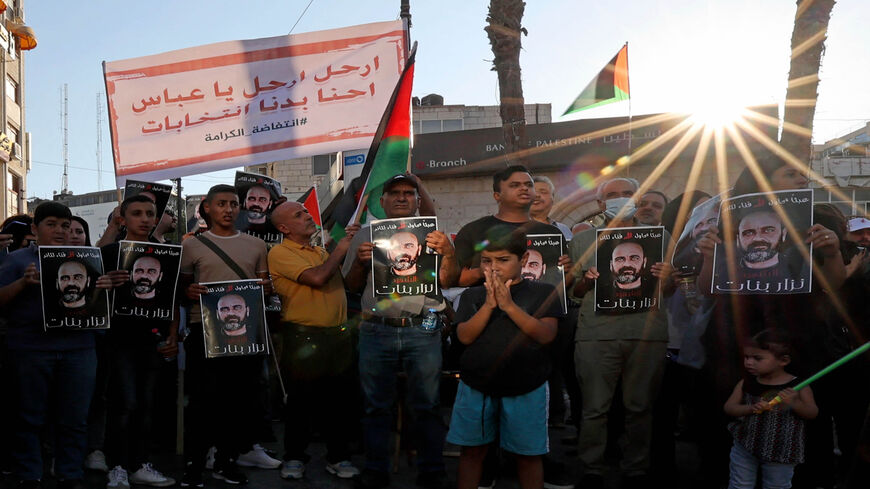 RAMALLAH, West Bank — The Ramallah Magistrates Court acquitted Jan. 19, 15 Palestinian activists who had been charged with “illegal gathering,” “insulting the authorities” and “continuing to gather and refusing to disperse.”

Dozens of activists were arrested and beaten by security forces during their participation in protests held in Ramallah last year to condemn the killing of political opposition figure Nizar Banat on June 24, 2021.

The acquittal decision, however, did not close the file of human rights abuses and violations of freedoms by the Palestinian Authority (PA). The same court postponed the trial of more than 18 activists to March 16 and April 4, due to the nonattendance of the public prosecution witnesses.

Omar Assaf, member of the National Democratic Rally, a West Bank-based political group that includes a number of activists, and one of the activists being tried by the PA, told Al-Monitor, “Fifteen activists were acquitted because the public prosecution did not present any evidence to prove the charges against them, which proves that they were fabricated charges. Therefore, we felt that the judge was ashamed of the ongoing trial of civilians for more than six months without evidence.”

Assaf said, “The acquittal decision does not mean that the PA has changed its practices. Rather, it will continue to suppress freedoms and will not allow the expression of opinion. It is heading toward more security intrusion. The acquittal decision might have been pushed by international pressure to follow up on human rights and the prosecution of activists.”

The PA often charges activists and journalists with vague accusations to try them, such as “defaming the PA,” “insulting high dignities” and “inciting sectarian strife.” Most of these charges do not lead to a conviction, but the trial might drag on for several months or years.

Assaf pointed out that the PA’s violations against activists and political opponents are on the rise. Arrests, summons and trials have been increasing in the past months, in an indication that the PA continues to muffle opposing voices. He believes the PA is increasing its clampdown on any dissent and tightening control of the internal situation to prepare the Palestinian street “for its political project to launch negotiations with the Israeli occupation and develop relations with it.”

Suwaiti told Al-Monitor, “After four years of hearings, the court sentenced me to three months in prison in a case brought against me by the former deputy minister of local government Hussein al-Araj, on charges of defamation and slander.”

He said that four years earlier, he had criticized Araj for squandering public funds, as the latter had refrained from granting some officials a clean slate required to run for local elections. These officials, according to Suwaiti, owed hundreds of thousands of shekels in water and electricity debts to the municipalities.

The Nablus Magistrates Court issued Jan. 20 a three-month prison sentence subject to appeal against journalist and artist Abdul Rahman Zaher on charges of “defamation against the PA.” He was acquitted of the charges of “publishing information on racial strife” and “posting fake news” on social media.

Zaher was arrested and detained by the Preventive Security Service on Aug. 16, 2020, for a period of 37 days and then released on financial bail, before his file was transferred to the court in Nablus.

In conjunction with the prosecution of activists, the PA security services continue arresting activists, as well as of Islamic Jihad and Hamas in the West Bank, which at times involve clashes and confrontations with the residents.

At dawn on Jan. 21, members of the security services raided the town of Beita in Nablus governorate and arrested Islamic Jihad leader Abdul Raouf al-Jaghoub, and two other youths, Bilal Hamayel and Mutassim Dwaikat.

Hamas and Islamic Jihad accuse the PA security services of continuing their arrests against their cadres in the West Bank for political reasons, especially after the last conflict in May. In a Jan. 21 press statement, Islamic Jihad said, “The PA and its apparatuses are continuing their practice of repression, political arrest and their pursuit of leaders and activists who are leading the confrontations against the [Israeli] settlement [project] and colonial annexation. These practices have been escalating against the backdrop of security coordination meetings [between Israel and the PA]. The PA and its apparatuses seem to be taking turns with the occupation to extinguish the state of conflict, and prevent it from continuing and expanding.”

Hossam Badran, member of Hamas’ political bureau, said in a Jan. 21 press statement, “These arrests [by the PA] represent a stab in the back of the popular resistance in the West Bank, and its icon, the town of Beita, which withstood for a long time in the face of occupation and settlements and sacrificed martyrs and injured people, and is still standing on the frontlines."

The Committee for the Families of Political Prisoners and Detainees in the West Bank documented 2,578 violations throughout last year and up until now, considering 2021 the year that witnessed the most various violations by the security services.

Muhannad Karajeh, director of Lawyers for Justice, told Al-Monitor that 2021 was one of the years witnessing the most political detention and human rights violations in the history of the PA, and that the violations are ongoing.

He pointed out that one of the most significant events witnessed in 2021 was the killing of Banat, and the cancellation of the general elections. He noted that since the beginning of 2022, about 100 citizens have been arrested and summoned in the West Bank, and hundreds are still being tried periodically before the courts. Since the beginning of the year, he continued, three activists — Suwaiti, Zaher, and Fares Abu Bakr, an activist and university student from Jenin — have been sentenced to prison.