Is the PA coordinating arrests with Israel?

In light of the climaxing uprising, some claim the Palestinian Authority's security services are coordinating arrests, so that after a Palestinian suspect is released by the PA he is shortly thereafter detained by Israel. 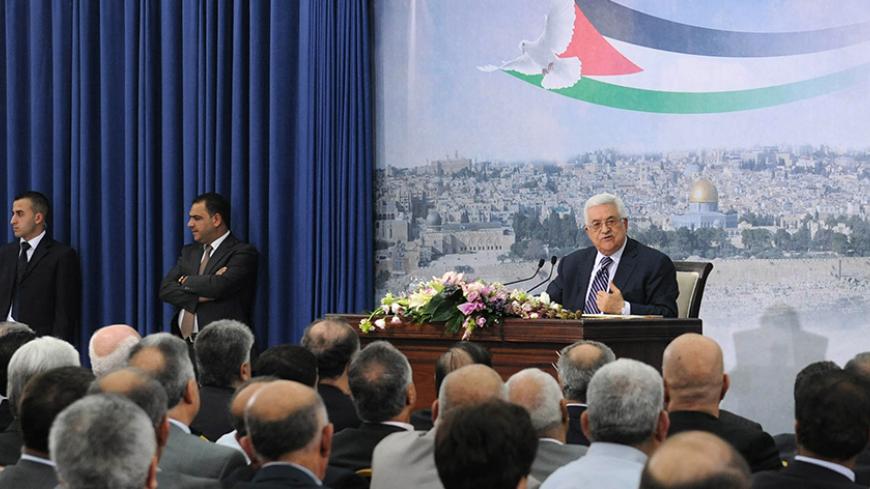 The Palestinian arena has recently been dealing with the repercussions of an incident that suggests the Palestinian Authority (PA) and Israel exchange information on prisoners in order to prevent armed operations against Israel. On April 9, three Palestinian men were arrested in Ramallah by the Palestinian security services in coordination with the Israel Defense Forces (IDF), which brought back to the minds of the Palestinians the issue of security coordination between the PA and the IDF.

On March 31, Bassel al-Araj, 33, from Bethlehem; Haitham Siyaj, 23, from Hebron; and Mohammed Harb, 19, from Jenin, who were living together in an apartment in Ramallah, went missing.

On April 1, a cleaner working for the city's municipality found a bag in a garbage bin that contained a laptop, mobile phones and the men’s identity cards.

A relative of one of the men told Al-Monitor on condition of anonymity, “Before arresting them, the Palestinian security forces had raided their apartment in Ramallah and did not find anything unusual. The Palestinian security investigations confirmed that they were not detained by Israel and that they did not leave the West Bank. This raised more doubts and caused the public to become concerned about their disappearance.“

Following searches and investigations, the Palestinian General Intelligence Service arrested the trio April 9 in a remote mountainous area in the village of Aroura, north of Ramallah.

On April 10, the Israeli Radio announced that the three men had probably been preparing themselves to attack one of the settlements near Ramallah, as they were caught in possession of a locally manufactured Carlo assault rifle and grenades.

Louay Zreikat, spokesman for the West Bank police, told Al-Monitor, “The families of the three young men had informed the Palestinian police that their sons disappeared under mysterious circumstances. We immediately started the appropriate search and investigation procedures. We even issued a circular with their names to all Palestinian cities in the West Bank, until we tracked them down in the village of Aroura north of Ramallah. The three men are subject to investigations by the competent authorities to find out the details of their disappearance.”

Within the scope of the security dimensions of this incident, the critical role of surveillance cameras deployed in the West Bank was brought to the public's attention. The cameras had taken photos of the three men in one of the stores near their apartment as they were packing up large quantities of food, supposedly in preparation of their mission.

Yasin Izz al-Din, a Palestinian writer specialized in armed resistance affairs, told Al-Monitor, "Interestingly, the three members of this group have multilateral political orientation. Bassel al-Araj is a leftist activist, Mohammed Harb is pro-Hamas and Haitham Siyaj is a released prisoner of unknown political orientation. This is uncommon in armed action; usually the members of the same group are affiliated with the same organization and share the same intellectual level.”

Although the Palestinian security service remained silent on the intentions of the arrested men, Israeli newspaper Maariv reported April 9 that they were planning a shooting or an abduction of settlers or soldiers near Ramallah.

While Israel said that the motive for the armed operations against the Palestinians is the deteriorating economic situation, the economic conditions of these men is relatively good, with Araj being a pharmacist and Harb an engineer.

Muhannad Karajeh, a lawyer at Addameer Prisoner Support and Human Rights Association in Ramallah, told Al-Monitor, “In the early days of the investigation at the Palestinian security services headquarters, the men were subjected to different methods of torture, such as stealth torture, sleep deprivation and continuous questioning. They were beaten, insulted and not allowed to take showers, which is contrary to the Convention against Torture and Other Cruel, Inhuman or Degrading Treatment or Punishment signed by the PA. We are clearly facing an issue related to political arrests.”

Palestinian reactions came successively on the arrest of the men as a continuation of previous arrests of resistance members. On April 14, members of the Palestinian Legislative Council, such as Basem al-Zaarir and Samira al-Halaika from the West Bank and Marwan Abu Ras and Mushir al-Masri from the Gaza Strip, indicated that the arrest of the three men falls within the scope of the revolving door policy. Under this policy, the PA would arrest a Palestinian suspect, and upon his release he will be arrested shortly thereafter by Israeli security services.

The families of the three detainees and other activists staged a sit-in April 17 in front of the headquarters of the General Intelligence Service in Ramallah, calling for their release.

Hamas spokesman Husam Badran told Al-Monitor, “Hamas considers the PA responsible for the arrest of the three young men, as it is working publicly on aborting the intifada and halting resistance operations against the Israeli occupation — which detained dozens in the past few days — after they were detained for days and weeks by the PA. [This] requires a Palestinian position against the blatant security coordination with Israel.”

Palestinian President Mahmoud Abbas said April 19 in an interview with German magazine Der Spiegel that the PA arrested three men because they had plotted attacks on Israel. This is while Majid Faraj, head of the Palestinian General Intelligence Services, told Defense News Jan. 18 that Palestinian security foiled 200 attacks against Israel during the last three months of 2015.

Israeli daily newspaper Yedioth Ahronoth reported April 23 that there are prevailing convictions in the Palestinian street that the arrest of the three men is an outcome of the security coordination between the Palestinian security services and Israel, and that these services are competing with each other to provide security information and intelligence to the Israeli army on the resistance and its activities.

Sometimes, the Palestinian national security forces provide their Israeli counterparts with confessions made by Palestinian detainees interrogated in Palestinian prisons. This suggests that there is a joint computer network, as noted by B'Tselem - The Israeli Information Center for Human Rights in a report in February.

Although the arrest of the three men raised the ire of the Palestinians, the PA does not seem to halt its policy to prevent armed operations against Israel. It may be determined to continue to arrest and prosecute those who plan to attack Israel, fearing the Israeli reaction and Hamas benefiting from these operations.