The Israeli military response in the West Bank following the kidnapping of three teenagers has raised serious fears of a popular revolt in the occupied territories. 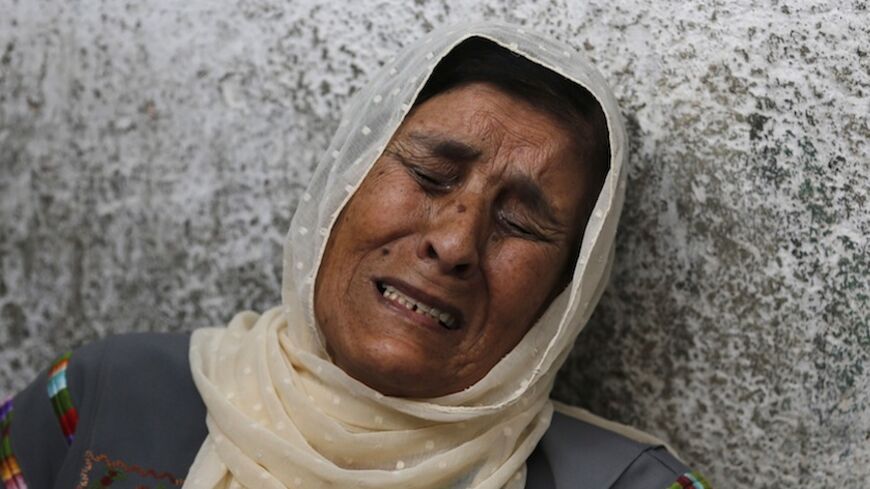 The mother of Palestinian Mohammed Attallah mourns his death at a hospital in the West Bank city of Ramallah, June 22, 2014. - REUTERS/Mohamad Torokman

RAMALLAH, West Bank — Since June 13, there hasn’t been one quiet night in the West Bank, which has seen repeated Israeli incursions following the announcement of the disappearance of three Hebron teenagers.

The Israeli military operation dubbed “cleaning the stables” has so far resulted in the martyrdom of six Palestinians, the arrest of 560 others and the closure of dozens of educational, media and relief institutions.

Israeli Prime Minister Benjamin Netanyahu accused Hamas of being behind the operation, and that the military operation aims to eliminate the Hamas movement in the West Bank and recover the three teenagers. But there has been no progress in this regard so far.

The military campaign is no longer about finding the teenagers. It is now an all-out war to eradicate Hamas and blow up the national unity government, which Israel rejected.

While the Israeli Cabinet decided to narrow the scope of its military operations against Hamas in the West Bank on June 24 and focus on intelligence work to search for the missing teenagers, many have linked this decision to the violent confrontations in Ramallah and the growing fears that continuing the operation would ignite the situation in the West Bank.

Media reports quoted an Israeli official saying that the decision was made according to contradicting estimates and significant concerns within the Israeli cabinet that a major military operation to continue during the holy month of Ramadan may directly flare up the situation on the ground in the West Bank.

On the Israeli military operation, Wasef Erekat, a retired Palestinian major general, told Al-Monitor that Israel is implementing its plan on the ground, and that what we are seeing now is only the early stages of this operation.

He said, “Statements by Israeli officials confirm that there are multiple targets for the military campaign.” But these goals, according to Erekat, “cannot be implemented in a few days and will need a long period of time.”

Erekat said that achieving the operation’s goal to weaken Hamas “will take months and perhaps years, especially since Hamas is a mass movement with support from all levels of Palestinian society and cannot be eliminated. … The search for the settlers has no time limit. Israel searched for Gilad Shalit for five years. Will the Israeli campaign continue for five years?”

Hamas said that the arrest campaign is evidence of Israel’s confusion, because the arrests affected political figures who had previously been arrested. But Israel’s threat to expel Hamas figures to the Gaza Strip made Hamas warn Israel of the consequences and implications of such a move.

A student in the Islamic Bloc at Birzeit University, which was stormed by the occupation forces at dawn on June 19, told Al-Monitor, “Israel is waging a war on Hamas and all its student and relief arms in the West Bank, but it cannot eliminate it. … Hamas has come under a fierce campaign by the Palestinian Authority (PA) since 2007, but it did not destroy it. … Hamas is a mass movement rooted in the people.”

But amid its military campaign, the occupation authorities have started fearing possible negative implications of the operation on the PA and the possibility of an explosion, after the escalation of public anger toward it.

Popular anger caused dozens of youths to attack the headquarters of the Palestinian police in downtown Ramallah. They destroyed seven police vehicles at dawn on June 22. Afterward, violent confrontations broke out and Palestinian security forces fired live bullets on the youths, wounding three. Also, a Palestinian police officer was briefly kidnapped in the Qalandia refugee camp.

Political analyst Jihad Harb said that Israel is trying to provoke the Palestinians. “Israel has a plan to destroy the infrastructure of the Palestinian people, using any event as a pretext, to separate the West Bank from Gaza and put an end to the national reconciliation government and rearrest former prisoners. … Israel is provoking the Palestinians with arrests raiding cities and houses, and destroying them, in addition to trying to impose a rift between the people and the [Palestinian] Authority along the lines of what happened in Ramallah, all that to tense up the internal atmosphere,” he told Al-Monitor.

Erekat said that Israel is using a strategy of brinksmanship whereby it makes maximal threats and implements things in high secrecy. In other words, “the collective punishment would be distributed. The West Bank’s links would be cut, so as not to lead to a popular explosion. … Israel is aware that if the pressure continues to the end, there will be an explosion, which is not what Israel wants.”

Speaking to several ordinary Palestinians, on condition of anonymity, gives the impression of serious disappointment in the PA’s handling of the matter.

A Palestinian trader told Al-Monitor, “The PA has shown, through its leaders and spokespersons, an unmatched sympathy and nonstop weeping for the loss of these soldiers, and it offered to help in the search for the settlers and participated in that by coordinating with Israel.”

An accountant, who met with Al-Monitor in Ramallah, shared a similar view. “It is absurd that Israel would use the kidnapping to justify its military operation, because it’s a revenge operation, and the PA incited [Israel] to further repress Hamas and helped [Israel] by providing security coordination,” he said.

A Palestinian journalist Al-Monitor met with in Ramallah said that the Israeli operation in the West Bank came to cover the army’s failure in preventing the kidnapping of the teenagers, despite hundreds of warnings and its failure to reveal how the kidnapping happened — regardless of the advanced technology of the Israeli army and intelligence services.

“I think that the size of the response was expected in view of the Israeli aggression on the Gaza Strip after the Palestinian resistance captured soldier Gilad Shalit,” she told Al-Monitor.

Regarding the position of the PA, she said: “The Israeli operation has put the PA in a clear confrontation with its own people because the basis of the Israeli aggression is directed toward the various segments of the people. And unfortunately, the PA has openly declared its willingness to work at any security level that is carried out by the Israeli army to implement the campaign’s objectives. As a result, the PA police headquarters in downtown Ramallah was attacked as an expression of the public outcry, especially regarding the security coordination policy and for not defending the Palestinian people against an aggression that has been unseen in years in the West Bank.”

In turn, a student political activist told Al-Monitor: “The occupation’s recent operations reflected its confusion and revealed the paucity of information that it has. It’s as if [the occupation] is looking for an achievement to regain a bit of dignity, which was insulted by the resistance, and reassure and raise the morale of the domestic front."

He added, "The PA and its security forces have not been able to beautify their image for us this time. [Their truth has been revealed] to all as having a functional role in security cooperation, coordination and information exchange with the occupation.”