The kidnappers of three Israeli teenagers have successfully hidden their tracks, frustrating Israeli and Palestinian efforts to find them. 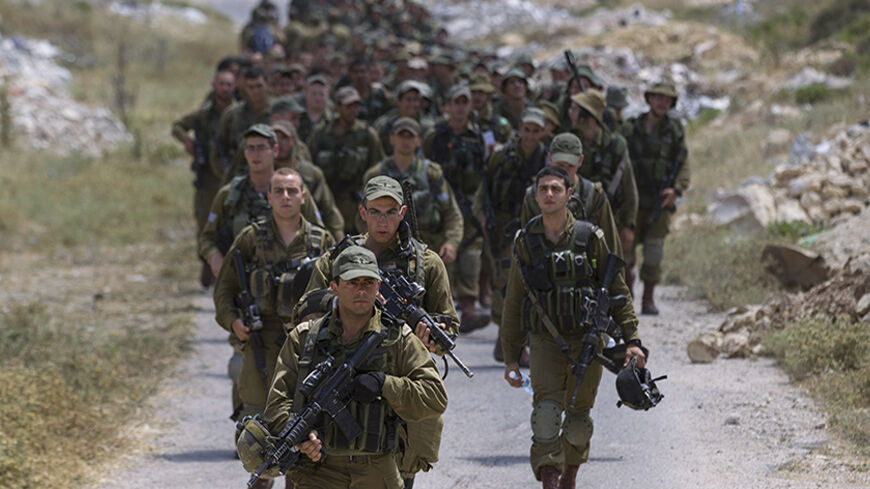 Israeli soldiers search for three Israeli teenagers believed to have been abducted by Palestinians near the West Bank City of Hebron, June 21, 2014. - REUTERS/Baz Ratner

Speaking on condition of anonymity, a Palestinian security official told Al-Monitor that the search, being conducted by Israeli intelligence in coordination with Palestinian agencies, has focused on two possibilities. “The settlers may be alive somewhere, and this is the stronger possibility, because the perpetrators may want to conduct an exchange deal. Thus, we are in a race against time to reach the detention place for fear that [the teenagers] might be harmed and to bring them back alive, as ordered by President [Mahmoud] Abbas. … Another possibility is that the settlers were killed during the kidnapping because they resisted the kidnappers or because the kidnappers were logistically unable to hold them for a period of time. But they were likely not killed, because Israel would pay a low price in any upcoming deal if [the hostages are dead].”

Journalist Awad Rajoub from Hebron noted, “The area of ​​Gush Etzion, where the settlers were kidnapped, is under complete Israeli control, which imposed a blockade on it and closed off its exits as well as the streets that link it to the rest of the area. [Israel] heavily deployed its forces there and launched massive incursions and searches in all areas. … Hebron is surrounded by settlements and is not connected to the outside world. It has an area of up to 1,000 square kilometers [600 square miles] and a population of 700,000. Israel dealt with the large area by turning the inhabited areas into ghettos, installing iron gates at the entrances, which are closed when needed, to control movement in and out. That would block the kidnappers' movements if they wanted to get out.”

Al-Monitor met with a former official from the Preventive Security Service in Gaza who participated in the investigation of the Hamas kidnapping of the Israeli soldier Nachshon Wachsman in late 1994. The official, nicknamed Abu Ammar, said, “It is clear that the perpetrators of the Hebron operation did not use a cell phone nor any electronic device because they know they [cannot control] the electronic signal once it leaves the device. All means of Palestinian communication, land and electronic, are infiltrated by the Israelis. They have likely gotten rid of their communications device for fear that Israel may be able to pinpoint its location.”

Al-Monitor obtained a document being circulated by Palestinian military elements wanted by Israel. It specifies details on where they might hide themselves or possible hostages. One of the criteria is that the location “be fit for human life and in an environment where a secret can be kept, away from the eyes of the people and Israeli eavesdropping devices, and a healthy place so as not to harm the health of the kidnapped and the kidnappers. [The site] must be equipped with sanitation, water, bathrooms, air conditioning and television. Its entrances must be camouflaged and not visible.”

Abdul Sattar Qassem, a Palestinian academic from Nablus, in the northern West Bank, said, “The Palestinian Authority [PA] discovered a Hamas hiding place in the village of Orif, south of Nablus, in September 2012. [The site] was stunning in terms of design and equipment. It was intended to [hold kidnapped] Israeli soldiers. A similar [hiding place] was discovered in the al-Jura region, in Hebron, in early 2013, indicating that Hamas was preparing to implement its strategy of kidnapping Israelis.”

A Hamas official who spoke with Al-Monitor responded to this allegation by saying that the PA’s discovery of the hiding place at that point was part of propaganda to support a new offensive against the movement. He called on security authorities to reveal it to the public, but did not deny or confirm the information, refusing to link it to the disappearance of the three teenagers. He said, “Until this moment, all we have is an Israeli story about the disappearance of these settlers, without [evidence that] Palestinians are responsible for the kidnapping.”

The Palestinian security official who is participating in the operation to find the teenagers told Al-Monitor by phone, “The prevailing security hypothesis of the Israelis regarding the search is that three highly trained elements carried out the kidnapping. They have certainly studied the road and chose the location well. … They knew the entrances and exits of the area to facilitate the withdrawal. … We estimate that the kidnappers and hostages are not in the areas being heavily combed and searched by the Israeli army, so the [kidnappers] will not be easily caught by a commando operation if they are discovered.”

Lack of progress on the kidnapping case is frustrating the Israelis, according to the official. He stated, “Israel is frustrated because it is using all its secret intelligence techniques to catch the kidnappers without being able to put together a profile for them. This is because the search process was delayed eight hours because the police didn’t notify [Shin Bet] about a phone call [the police received from] one of the hostages. But Israel is waiting for the kidnappers to make a tactical error that would be enough to reveal their secret whereabouts.”

Israel expressed concerns about the possibility that the kidnappers might transport the teenagers outside the West Bank. When Al-Monitor asked a Palestinian official in the West Bank with ties to the Department of Coordination and Liaison about this possibility, he said, “The search operation is taking all possibilities into account, even if they are fictional to some people. Such a kidnapping operation will not be successful if the abductors remained in the West Bank, which is controlled by the Israeli military by land and air. The abductors will get caught sooner or later.” He added, “Transporting settlers to Gaza or the Sinai is possible, even though it seems impossible because Israel does not have control there. The kidnappers could bargain for an exchange deal with complete ease of security.”

The Palestinian security official told Al-Monitor, “A hotline will be established between the Jordanian, Palestinian and Egyptian intelligence services to track the repercussions of the kidnapping, study its effects and prevent the transfer of the abducted outside the West Bank. There are fears of a regional crisis with Israel, especially since the city of Hebron is located south in the West Bank, and the distance separating it from Gaza and Sinai does not exceed 50 kilometers [31 miles].”

Despite the accusations of Hamas having carried out the kidnapping, the movement's leaders maintained their silence when it came to claiming responsibility for the operation. On June 23, Hamas leader Khaled Meshaal announced on Al Jazeera that he had no information on the operation, but gave it his blessing and commended the perpetrators. Based on telephone and personal interviews that Al-Monitor conducted with military personnel in Gaza, there appeared to be a sense of contentment regarding the "success" of those who conducted the Hebron operation. Though no one claims responsibility for the kidnapping, there is certainly admiration among the Palestinian ranks.