Is Hamas linked to recent terror attack against Israeli youth?

Israel’s security services suspect that Hamas or Islamic Jihad infrastructure in the West Bank were involved in the recent killing of student and IDF soldier Dvir Sorek. 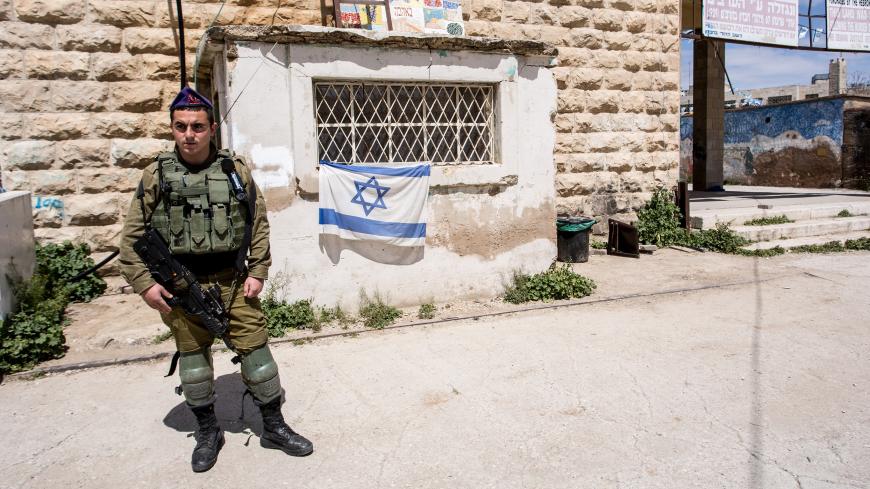 The Aug. 7 murder of Dvir Sorek, a 19-year-old soldier from the West Bank settlement of Ofra, was probably carried out by an organized terror cell. Initially, authorities suspected its members tried to kidnap Sorek, but further investigation led to the conclusion that he was stabbed to death by one or more assailants who had tailed him in their car along a 200-meter stretch of road on which he had been walking. Sorek had gotten off a bus at the southern gate to the Etzion settlement bloc of Efrat and was heading for the nearby yeshiva next to the settlement of Migdal Oz, where he studied as part of a combined religious study-military service program.

Israeli security officials believe the attack was neither a local initiative nor “popular terrorism” — a term the military uses to describe terrorists unaffiliated with any organization. The working hypothesis is that a Hamas or Islamic Jihad group operating in the Hebron area was responsible for the murder. While neither group claimed responsibility for the attack, both hailed its perpetrators. Hamas spokesman Hazem Qassem described the attack as “the most powerful response” to recent talk about Israeli intentions to annex Area C of the West Bank, saying it “proved that Israel had failed in its security coordination with the Palestinian Authority (PA).” Hamas also urged West Bank residents to hide the perpetrators so that Israel could not catch them.

The Etzion settlement bloc south of Jerusalem has been the scene of many terror attacks over the years. In 2005, terrorists shot dead three Israeli civilians as they waited for a ride at the Etzion junction. During a yearlong wave of terrorism that broke out in September 2015, several Israelis were killed and wounded in stabbing and car-ramming attacks in the area. However, the Etzion settlement bloc attack seared most deeply into the memories of all Israelis is the June 2014 kidnapping and murder of three Israeli teens — Gil-ad Shaer, Naftali Frenkel and Eyal Yifrach — which set off a war with Gaza known as Operation Protective Edge. It also prompted three Israeli Jewish terrorists to murder a Palestinian youth, Mohammed Abu Khdeir from the Shuafat neighborhood of Jerusalem, and burn his body. Israeli security authorities have learned the lessons of that grim summer, concluding that just one incident can result in a horrific chain reaction and spin out of control.

The response of the Israel Defense Forces (IDF) to the 2014 kidnapping-murder was a crucial trigger of the war with Gaza. In searching for the youths, the IDF launched a widespread manhunt codenamed Operation Brother’s Keeper, arresting hundreds of Palestinians, among them 50 whom Israel released from jail as part of a 2011 exchange with Hamas for kidnapped Israeli soldier Gilad Shalit. Hamas responded by firing rockets at Israel, and the rest is history. The IDF engaged in a 50-day war, the longest in its history, during which 63 soldiers, five civilians and a migrant worker from Thailand were killed. Over 2,000 Israelis were wounded. On the Palestinian side, more than 2,000 combatants and civilians were killed, and some 11,000 were wounded.

Back to the summer of 2019. Israel’s security forces realize that the current unrest in the West Bank hampers the IDF’s activities. That does not mean, of course, that the IDF will not intensify its efforts to locate Sorek’s murderers, but the lessons of the past and the volatile situation in light of the PA’s severe economic crisis call for a cautious, measured response. In 2014, the operation to locate the killers led to war. After this recent attack, a Palestinian security source told Haaretz correspondent Jack Khoury that the measures Israel takes now could have a significant impact on the situation in the West Bank. Collective punishment or widespread Israeli raids and detentions of hundreds of Palestinians similar to the 2014 Brother’s Keeper operation would be a surefire recipe for escalation.

On Aug. 6, I wrote here in Al-Monitor about the gloomy situation in the West Bank resulting from the PA’s economic crisis and described how Israel’s punitive withholding of tax revenues from the Palestinians was encouraging popular terrorism. Israeli security officials believe that any unusual security-related incident could let the genie out of the bottle and result in escalation. The sharp economic downturn has an effect on the morale of the PA’s security forces, who have only received part of their pay for the past three months, and on their willingness to engage in security coordination with Israel. In this climate, any Palestinian action perceived as a defense of Israel’s security is viewed as treason.

A similar climate during the second intifada (2000-2005) led to the suspension of security coordination. Public pressure on Palestinian President Mahmoud Abbas already led him recently to declare that he was re-examining a series of agreements with Israel; according to senior PA officials, he has also ordered his security agencies to scale back coordination with Israel. An Israeli security source tells Al-Monitor that the coordination continues despite Abbas’ declarations, but there is no guarantee that continued pressure on him will not lead him to suspend it.

While no suspects in Sorek’s murder have been apprehended yet, there is a high degree of certainty that Hamas is linked to the soldier’s murder, operating under the remote control of the deputy head of the Hamas political department in Gaza, Salah al-Arouri — just as Hamas supported and helped the kidnappers of the three youths five years ago.

On Aug. 6, the Shin Bet security agency announced that it had foiled a Hamas bombing attack in Jerusalem after discovering an explosive device in Hebron and the lab where it was made. According to the agency, the cell operated in the Hebron area under direct instructions from the Hamas “West Bank headquarters” in Gaza headed by Abdek Rahman Ghanimat, one of the Palestinians Israel released from jail in the Shalit deal. He is one of some 160 freed Palestinian inmates exiled at the time from the West Bank to Gaza, ripe for Arouri’s picking.

The insistence at the time by Prime Minister Benjamin Netanyahu and the heads of Israel’s security agencies on keeping the freed Palestinian inmates away from their homes in the West Bank under control of the PA has proven ill-advised. The Gaza Strip, sealed off from the world under Israeli and Egyptian blockades, provides fertile ground for terrorist-related activity by this group of people far away from home and with nothing else to occupy their time.

The timing of Sorek’s murder was opportune for Hamas, which is forever wavering between wanting to adapt itself to changing circumstances and to prove that it has not given up its fight against the Zionists or, God forbid, its ingrained Islamist ideology. On Aug. 8, I wrote in Al-Monitor about Israel’s security coordination with Hamas and the organization’s plan to beef up its so-called Restraining Force tasked with preventing an escalation along the border with Israel to allow negotiations on a long-term cease-fire deal. However, Hamas will not allow any Palestinian, especially not operatives of the PA or Fatah, to ridicule the movement for lowering its jihad flag. A two-pronged strategy of maintaining calm on the Gaza border but proving in the West Bank that it continues to fight the “Zionist enemy” is right up Hamas’s alley.