Israel understands that implementing the "deduction" law could generate an economic collapse of the PA and in turn endanger security coordination with the Palestinians. 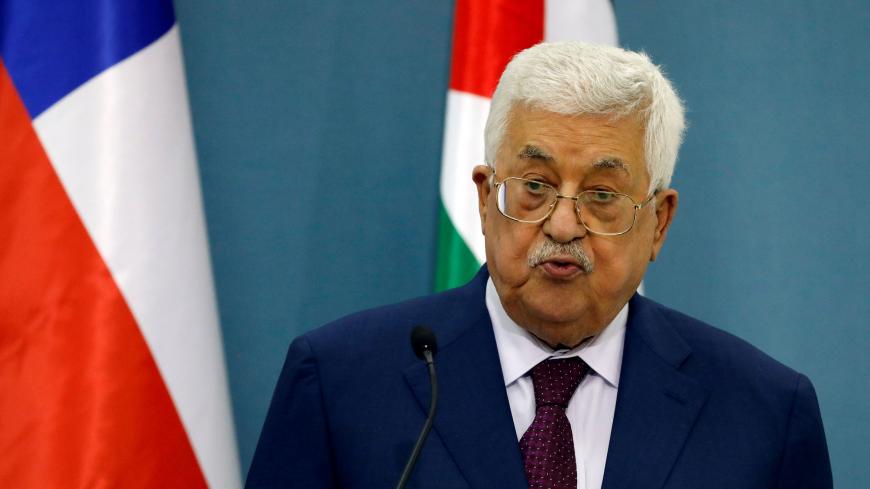 Half of the crisis in Israel’s relationship with the Palestinian Authority (PA) is behind us, but a comprehensive solution will have to wait until after the Sept. 17 elections. One thing is clear: In the final analysis, Palestinian President Mahmoud Abbas has defeated Israel. On Aug. 22, Israel transferred some NIS2 billion ($570 million) to the PA on the advice of its security agencies in light of the economic crisis in the West Bank.

A short reminder: The PA has refused in recent months to accept various taxes that Israel collects on its behalf (VAT, customs duties, fuel taxes) to protest Israel’s decision earlier this year to withhold some of these funds in order to punish the PA for its financial support of Palestinian terrorists and their families. So far, Israel has accrued NIS3 billion ($850 million) that the PA has refused to accept. Abbas’s insistent stand that he would accept all the money owed or none at all had led the PA to the verge of collapse, with Israeli security officials warning the political echelons that the coordination with the PA’s intelligence and police forces was under threat. Acting on the recommendations of security experts, the government sought a way out of implementing the so-called “deduction” law, but Abbas refused to fold. Finance Minister Moshe Kahlon met with his PA counterpart Shukri Bishara in an effort to resolve the crisis, to no avail.

Israel’s final offer to the PA was one it could not turn down. It released the PA from some of its commitments to Israel under the 1994 Paris Protocol, allowing the PA to impose taxes on the fuel it sells the Palestinians. According to the arrangement formulated jointly by Kahlon and PA Minister for Civilian Affairs Hussein Al-Sheikh, with Prime Minister Benjamin Netanyahu’s OK and the recommendations of the security agencies, Israel has now exempted the PA from paying tax on the fuel it buys from Israel, even applying the exemption retroactively to the past seven months. For the PA this is a win-win outcome — it can now buy fuel without paying taxes and impose taxes on Palestinian consumers in the West Bank.

That is not all. Israel has given the Palestinians an explicit promise that after the September elections, and assuming that Kahlon keeps his job in Israel’s next government, creative solutions would be found to transfer the rest of the PA funds that Israel is holding. According to a source in Israel’s Civil Administration, various ideas are being explored to end the crisis, including a reopening of the Paris Protocol and various tax exemptions for the PA.

The Paris Protocol followed immediately after the September 1993 Oslo Accord and was designed to create a customs union between Israel and the PA. The idea behind Israel’s demand at the time for a unified customs mechanism was to prevent duty-free goods from entering the PA territories in Gaza and the West Bank and creating unfair competition with the same goods sold in the Israeli market. The Palestinians demanded the creation of a free trade zone at the time, but Israel objected. As with all agreements with the Palestinians, a compromise was found — Israel would collect the duties and transfer them to the PA on a monthly basis.

All the agreements signed at the time, including the political and diplomatic ones, were designed as stopgap measures until a permanent solution was reached to establish a Palestinian state. However, a state has not been established, the terms of the temporary agreements have been eroded and the sides are forced time after time to seek solutions to problems no one thought they would face.

Israel’s ad hoc “quick draw” policies only serve to complicate matters. The deduction law may have sounded logical at the time to the Israeli public, given the simultaneous congressional approval of a similar US law known as the Taylor Force Act, but as soon as the Knesset adopted it in 2018, security officials began warning against populist laws that appease the political right but harm the interests of the state.

When the law passed its final reading in July 2018, with a sweeping majority of 87 lawmakers (out of 120), its authors and supporters claimed that any effective counterterrorism campaign must have an impact on the financial well-being of the terrorists and their families and on the situation of Abbas. The former head of the Shin Bet security agency, Knesset member Avi Dichter — one of the bill’s authors who served at the time as chair of the Foreign Affairs and Defense Committee and boasts of knowing the Palestinians better than others by virtue of his experience — issued an arrogant statement: “The PA turned itself into a factory that employs murderers. … Mahmoud Abbas and his aides, if you do not change the entry ticket into this factory, you will go to sleep one night and wake up in pieces.” Knesset member Elazar Stern of the opposition Yesh Atid party continued in the same vein: “This historic bill will significantly weaken the PA’s encouragement of terrorism.”

In fact, just the opposite occurred. As security officials warned, recent weeks have seen an increase in the number of terrorist attacks and attempted attacks from the West Bank. On Aug. 23, 17-year-old Rina Shnerb was murdered by an explosive charge detonated as she was hiking near the West Bank settlement of Dolev with her family. A week earlier, on Aug. 16, two young Israelis, a brother and sister, were injured in a car ramming near Jerusalem. On Aug. 8, Cpl. Dvir Sorek was stabbed to death by members of a Palestinian terror cell near Migdal Oz in the Etzion settlement bloc.

When he came to office in 2009, Netanyahu promised “economic peace” in order to achieve peace with the Palestinians. His remarks were probably meant to bury the diplomatic process that would have required Israel to give up land in the West Bank, although Netanyahu appears to have also truly believed that a stable Palestinian economy would ensure relative calm for Israel. The Coordinator of Government Activities in the Territories often posts announcements and photos on his Arabic-language Al-Munaseq Facebook page in order to show residents of the Gaza Strip how their brothers in the West Bank benefit from economic development (relatively speaking) compared to the dire economic straits in the Hamas-controlled enclave.

Nonetheless, in pushing through the deduction law, Israel acted contrary to all logic and brought on itself a severe escalation in the West Bank. In fact, the law that would supposedly curb terrorism has turned into a prime motivating terrorism force. Israel, not for the first time, made a hasty decision without exploring its implications — just as it did when it imposed a blockade on the Gaza Strip 12 years ago — and does not appear to have any idea how to extricate itself from the resulting mess.

Now, without intending to, Israel may be forced to abandon the Paris Protocol and hand Abbas a knockout victory. On the face of it, this may not be such a bad outcome. The customs union regulated by the Paris Protocol should have been renegotiated years ago, but it is too bad that such decisions are always made only after bloodshed and loss of lives.