The growing number of Palestinians involved in "popular terrorism" is evidently linked to Israel’s decision to deduct payments to Palestinian prisoners from the tax revenues of the Palestinian Authority. 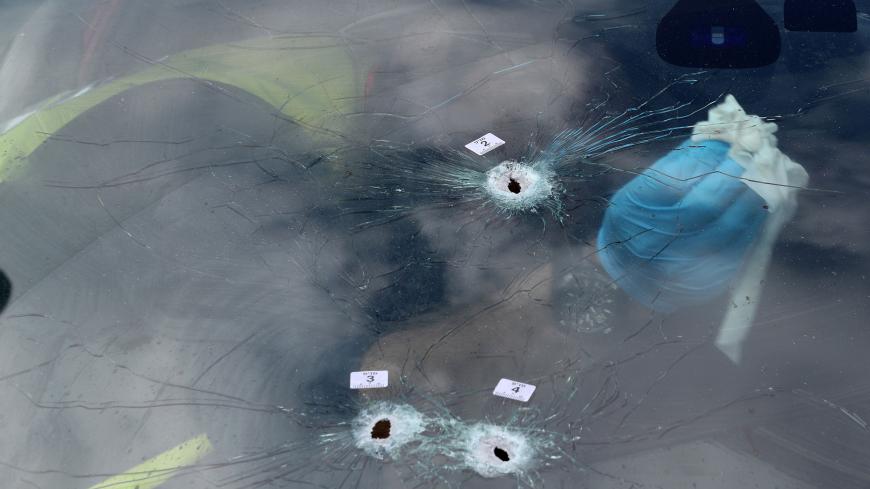 An Israeli forensic police officer checks a damaged car at the scene of a Palestinian shooting attack near the Jewish settlement of Ariel, West Bank, March 17, 2019. - REUTERS/Ammar Awad

In the predawn hours of Aug. 5, the Israel Defense Forces (IDF) arrested 13 Palestinians in the West Bank. According to an official IDF statement, the wanted men are suspected of involvement in terrorism, “popular terrorism” and violent disorderly conduct toward civilians and combatants. The use of the term “popular terrorism” in an IDF statement attests to the desperate straits of the Palestinian Authority (PA) and its impact on the Palestinians.

The term “popular resistance” was introduced by Palestinian President Mahmoud Abbas, initially in the days of his predecessor PLO leader Yasser Arafat, to differentiate it from “armed resistance” to which Abbas was opposed. The IDF and other security agencies adopted the term (as they did the Arabic word “intifada,” meaning “uprising”), but in a different context, using it to designate Palestinians, mostly in their teens, not affiliated with any organization or motivated by ideology, but rather driven by despair and frustration. Israel claims that the PA exploits the despair to encourage popular terrorism, or at least does nothing to curb it.

The Meir Amit Intelligence and Terrorism Information Center also contends that the PA encourages popular terrorism. According to an October 2017 report, the current violence, along with harsh anti-Israel incitement, stems from a diplomatic-strategic decision adopted at the August 2009 Fatah conference (reconfirmed at the seventh Fatah conference in December 2016). This decision, which calls for popular resistance, has been in fact implemented ever since by the PA and Fatah.

However, the report argues that there is a major difference between organized terrorism and popular terrorism. Israel can strike at the organizational infrastructure of organizations such as Hamas, Islamic Jihad and the Fatah movement’s armed Tanzim wing, but its capacity to collect intelligence on widespread, deep-rooted popular resistance and terrorism is limited, at best.

According to IDF reports, at least 50 Palestinians were detained in a series of nightly raids during the month of July. A Palestinian security force told Al-Monitor that figure sounds much too low, saying the IDF in cooperation with the Shin Bet security agency detained hundreds of Palestinians this past month. Exact numbers are hard to come by, but there is no doubt that something is going on in the PA and the reasons are clear. Earlier this year, Israel started deducting funds from the tax money it collects for the Palestinians in an amount equivalent to the sums the PA pays families of terrorists jailed in Israel or killed in attacks against Israel. In response, Abbas has refused to accept the rest of the money, resulting in a severe economic downturn. This, in turn, generates unrest, probably terrorism and subsequent daily Israeli arrest raids.

“There is no doubt that the despair, unemployment and deprivation encourage terrorism,” an Israeli security official told Al-Monitor on condition of anonymity, adding that Israel has also detected a decline in the motivation of PA security forces to foil terror attacks against Israel. The source attributes this to two factors: One is the deteriorating finances of the Palestinian forces themselves, who have been getting only half their monthly pay. The other is the public climate reminiscent of the second intifada (2000-2005), during which Palestinian security forces felt they could not swim against the tide and did not want to be perceived as serving the “Zionist enemy.”

With the so-called "deduction law," Israel has dug itself into a hole from which it cannot extricate itself. The lengthy and ongoing Israeli election campaigns this year have silenced any public discussion of the security threat posed by the continued cuts to the PA’s budget. The security agencies are the only ones coming up with initiatives for compromises or temporary solutions to ease the crisis. Finance Minister Moshe Kahlon has also met with his PA counterpart, Shukri Bishara, most recently in Kahlon’s Jerusalem office on June 26, during the Bahrain conference in Manama.

Given Israel’s continued refusal to back down from implementing the “deduction law,” certainly not during an endless election campaign, and Abbas’ continued refusal to accept the tax revenues minus the Israeli deductions, Kahlon presented Bishara with an offer. It is unclear whether Kahlon had a green light from Prime Minister Benjamin Netanyahu, but presumably he would not have acted on his own.

Kahlon suggested that Israel exempts the PA from 200 million Israeli shekels ($57 million) in monthly excise taxes it pays for the fuel it buys from Israel, and thereby eases its economic burden. The Israeli source said the proposal was put to Abbas several weeks ago, and he did not rule it out. On the other hand, Abbas announced July 25 that he was reexamining all the PA’s agreements with Israel and had formed a team to examine proposals for severing all ties with Israel. The team is headed by veteran Palestinian negotiator Saeb Erekat and includes Abbas associate and deputy Fatah head Mahmoud al-Aloul, considered the most hawkish senior Fatah official in the West Bank.

With Abbas seeking to score points with his people and boasting of measures he allegedly plans against Israel, he is unlikely to accept Kahlon’s compromise proposal.

According to the Israeli source, Abbas thought his refusal to accept any tax money from Israel would generate international pressure on Israel and even provide him with a cause to sue Israel at the International Criminal Court in The Hague. However, such pressure was not forthcoming and the PA found itself in a deep economic crisis. Abbas is reluctant to admit any mistakes and seeks ways to improve his standing among his people — for now, to no avail. Criticism against him is widespread, as is anger at Israel over the sanctions it has imposed on the PA that are hurting most residents of the West Bank.

This is what breeds the popular terrorism against which Israel is acting, as expected, with military measures. However, it is a vicious circle. Every nighttime arrest operation generates a counterreaction, with more and more young Palestinians joining the “people’s army” to take part in the popular resistance.