Israel campaigns against Abbas ahead of Bahrain conference

Even before the Bahrain conference started, Israel is busy explaining why Palestinian President Mahmoud Abbas is no partner for a peace process. 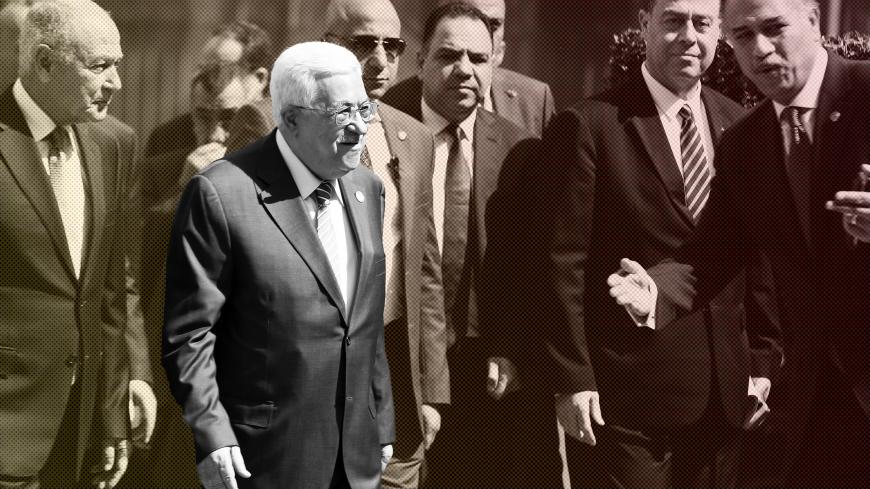 Egypt and Jordan eventually gave in to US entreaties and announced they would attend the June 25 economic conference in Bahrain. It was not easy, and Al-Monitor has learned that Israel had a substantial role in the persuasion attempts in a bid to save the conference, to which the Americans attach great importance. For the Americans, what is at stake is the prestige and honor of President Donald Trump. Israel is probably not interested in a conference of this kind, during which the United States is expected to unveil the economic component of its Israeli-Palestinian peace plan, especially not at the height of the campaign ahead of the Sept. 17 elections. Nonetheless, it has to help its ally avoid failure, for obvious reasons.

In light of the Palestinian intention to boycott the event, Egyptian and Jordanian participation is essential. As far as the United States is concerned, without them there is no point in holding an economic conference focused on the Palestinian issue. Now that the two important and influential members of the pragmatic Muslim club have sent their RSVPs, things can get underway. As for the outcome of the meeting — that is a different story.

The behind-the-scenes efforts invested by Trump’s emissaries to the Middle East, Jared Kushner and Jason Greenblatt, are very interesting. Israel, it seems, provided the United States with “damning evidence” showing that Palestinian President Mahmoud Abbas and his top officials were motivated by considerations of ego and control that were taking the Palestinians down a road to economic and diplomatic disaster.

Top Israeli security officials and decision-makers have monitored with concern for quite some time the economic decline of the Palestinian Authority (PA). The writing has been on the wall for a long time, but all the attempts Israel has made to forestall an impending collapse of the PA have been in vain.

Palestinian Prime Minister Mohammed Shtayyeh admitted in April that in three months, at most, the PA would be insolvent and unable to pay its debts and staff salaries. The only thing Abbas is adamant about and on which he refuses to yield is the monthly payments to the families of the Palestinian “martyrs” and inmates jailed in Israel.

In July 2018, Israel passed a law enabling it to deduct payments made by the PA to Palestinian assailants imprisoned in Israel from the tax revenues it collects on behalf of the Palestinians. In February, Israel started deducting these payments. Following the Israeli move, Abbas refused to accept any of the tax funds, greatly exacerbating the PA’s economic straits.

According to an Israeli security source (speaking on condition of anonymity), Israel presented the Americans with a series of suggestions it made to the PA in an effort to reach an accommodation over the money, and compromises were even offered that would allow Abbas to walk back from his intransigent stand without losing face. However, the source claimed, Abbas vehemently rejected any arrangement or compromise “and is intent on bringing about the PA’s collapse unless Israel gives in and returns in full the money it has been withholding.”

The scenario of an imminent PA collapse helped the Americans to persuade Egypt as well as Jordan, which was a tougher nut to crack. However, the Jordanians understand that they will be the first to suffer the severe repercussions of a PA collapse. Jordan itself is also financially strapped, and the last thing it can afford is trouble in the neighboring West Bank. Egyptian President Abdel Fattah al-Sisi also cannot afford to sit on the fence and watch the PA crash, which would affect the already catastrophic situation in the Gaza Strip and from there, neighboring Egypt.

This very real, unexaggerated nightmare scenario did the trick. Egypt and Jordan will attend the Bahrain conference.

Al-Monitor has learned that Israel will use in the coming days the same data that served the Americans in convincing Egypt and Jordan to prove that Abbas is the real problem. Israel will argue that he is not simply a serial peace rejectionist, but also someone leading his people to calamity.

This will be the underlying argument that Israel will present to conference participants. Finance Minister Moshe Kahlon, who has what may be termed a positive relationship with senior PA figures, will probably represent Israel in Manama. During his term as finance minister, he held meetings with former Palestinian Prime Minister Rami Hamdallah, Palestinian Finance Minister Shukri Bishara and Minister for Civilian Affairs Hussein al-Sheikh. The meetings resulted, among other things, in settling the PA’s extensive debt to the Israel Electric Corporation.

It is no secret, the Israeli security official added, that Israel would consider the Bahrain conference a success if its participants, at least most of them, agree at its end that Abbas has ended his historic role and that the crisis must be resolved by bypassing the recalcitrant leader.

No one knows how (and if) such an outcome will come about, but it seems that this is the real importance of the participation by Jordan, Egypt and Saudi Arabia (which has yet to announce its participation officially).

Israel’s campaign against Abbas will take several forms. For example, the Foreign Ministry has prepared talking points for all Israeli diplomats abroad, especially those in PA donor states, conveying Israel’s warnings about the situation. At the same time, Israeli government ministers will hammer in the message that Israel had suggested to the Palestinians meetings with senior officials of its Civilian Administration in the West Bank to resolve the crisis, but had been rebuffed.

The main message to participating states at the Bahrain conference will be that this is a crucial time for the PA’s future, and that they must lend a hand to prevent the catastrophe toward which Abbas is leading the Palestinians in his intransigence. In other words: The conference in Bahrain is not an economic meeting, but rather a conference designed to save the PA while delegitimizing the man at its helm.