Israel will start cutting power in the Palestinian towns of Bethlehem and Jericho due to electricity debts owed by the PA, which Palestinian officials say they "don't even dream of being able to pay back." 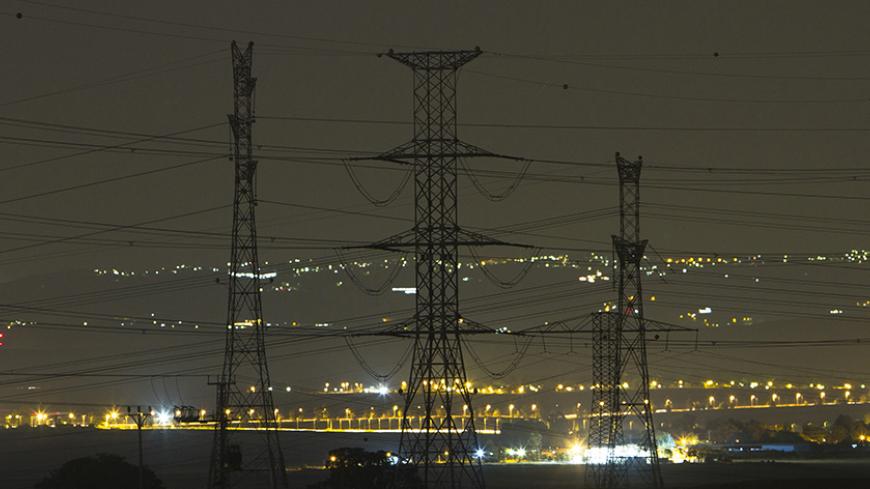 Electricity pylons and power transmission lines are seen at night near Kibbutz Negba in southern Israel, May 17, 2012. - REUTERS/Amir Cohen

The Jerusalem district of the Israel Electric Corporation (IEC), which supplies power to all the Palestinian communities in the West Bank, started imposing sanctions on the Palestinian Authority at the beginning of April to force it to repay a huge debt. The company cut power to cities in the West Bank for several hours a day, starting with Bethlehem and Jericho — two of the most quiet Palestinian towns. The Palestinians expect the electric company to add other communities to the list in the coming days — most likely Nablus, Jenin and perhaps Hebron — to increase pressure on the PA.

One thing is clear: Any punitive measure against the PA, even cutting off the power supply 24/7, will not make the Palestinians pay their debt. According to the IEC’s announcement, the PA owes 1.74 billion Israeli shekels (about $430 million) — practically equal to all the funding the PA gets annually from the European Union states.

A Palestinian Finance Ministry source told Al-Monitor on condition of anonymity, “Just this week, the PA received $15 million from the EU to pay the salaries of its employees and the pensions of veteran West Bank workers who have retired. We pray every month for the money to arrive on time and give us breathing space, without which people would starve.”

When asked about the debt to the Israeli utility company, the Palestinian official said, “We don’t even dream of being able to pay back such a sum, but Israel has to understand that this is the result of its decision to freeze the transfer of funds to the PA in the past — a measure that put the PA into a tailspin.”

Up until recently, as a diplomatic or security-related pressure tactic, Israel did not transfer the tax money it collects for the PA on a regular basis. But following international criticism and concern about the collapse of the Palestinian administration in the West Bank, the Israeli civil administration is now meticulous about transferring the funds. However, according to the source at the Palestinian treasury, Israel keeps arbitrarily deducting money from the sums it is supposed to hand over to the PA — each time with a different excuse.

The official Palestinian argument, according to which the PA’s debts to the power company are the result of this Israeli conduct, only partially explains the huge debt it has racked up. Actually, the Palestinian electric company, which supplies the power it gets from Israel to Palestinian consumers, cannot collect bills from extensive areas of the West Bank due to the economic distress of most households.

The economic situation in the West Bank has reached record lows over the past year. Adnan Abu Amer reported for Al-Monitor in February on the sharp drop in the PA’s budget in the wake of significant funding cuts by European donor states. The decline in funding and record unemployment in the PA, which according to the Palestinian Central Bureau of Statistics is at 41.5% among youths, are the main reasons for the sharp downturn. Withholding payment of its power bill is the result of these dire economic straits.

“We are talking about young unemployed people who are a burden on their parents,” the Palestinian source said. “Most of them went to university hoping and believing — as did their parents — that they would find a profession and make a living. But all the hopes and dreams blew up in their face. That explains the rage that led them to desperate measures [stabbing attacks against Israelis]. This is also why the Palestinian electric company cannot collect the money it is owed by many families, who are barely subsisting these days. I can also tell you about employees of the PA who are working but still can’t pay their bills.”

Al-Monitor has been reporting on the fears of Israel’s security agencies about a potential PA collapse given the decline in its revenues and foreign funding. Israeli Prime Minister Benjamin Netanyahu said at a Jan. 3 Cabinet meeting that he does not wish for the PA’s collapse, but added that he had instructed the relevant officials to prepare for such a scenario.

The PA announced on April 6 that it would immediately transfer 20 million shekels ($5.1 million) to the IEC, but the announcement does not change the dire situation. In any case, chances are slim to none that the PA will be able to extricate itself any time soon from the financial predicament that threatens its future existence. Israeli security experts understand this, leading Defense Minister Moshe Ya'alon and Chief of Staff Gadi Eizenkot to adopt initiatives that might prevent such an outcome. Thus, for example, defying the logic of reactions to a terror wave, Israel issued thousands of work permits to Palestinian laborers. This policy, for now, has proven itself. In the past two months, there has been a significant drop in the number of terror attacks. Hence, the power company’s decision to cut off supply to PA towns surprised many Israeli officials.

The measure was not coordinated with the civil administration. Al-Monitor has learned that representatives of the civil administration were given a laconic announcement about the electric company’s plans to cut off power in order to signal to the PA that it has no intention of writing off the massive debt. The civil administration did what it could to remove Ramallah from the list of targeted cities, given that most of the PA’s financial institutions are located there. The administration prefers that Hebron — one of the hotspots of the recent cycle of violence — be exempted from the planned blackouts, too.

“Don’t you understand that the pressure is not on us, but on you?” the Palestinian source asked. He explained that in his view, the IEC wishes to pressure the civil administration into footing some of the utility bill by handing over tax revenues it collects for the PA. “But this will not happen because of heavy international pressure on Netanyahu, and he will not dare play along with this,” the source said.

So if the power company doesn’t get the money from the PA or from the civil administration, where is the logic in sanctions?

“There’s no logic. But since when do you operate logically?” the Palestinian source replied.