Netanyahu's concern for fate of PA 'too little, too late'

Over the years, Prime Minister Benjamin Netanyahu has weakened the status of the Palestinian Authority and of President Mahmoud Abbas with a variety of means — but is he now suddenly concerned that the PA might collapse? 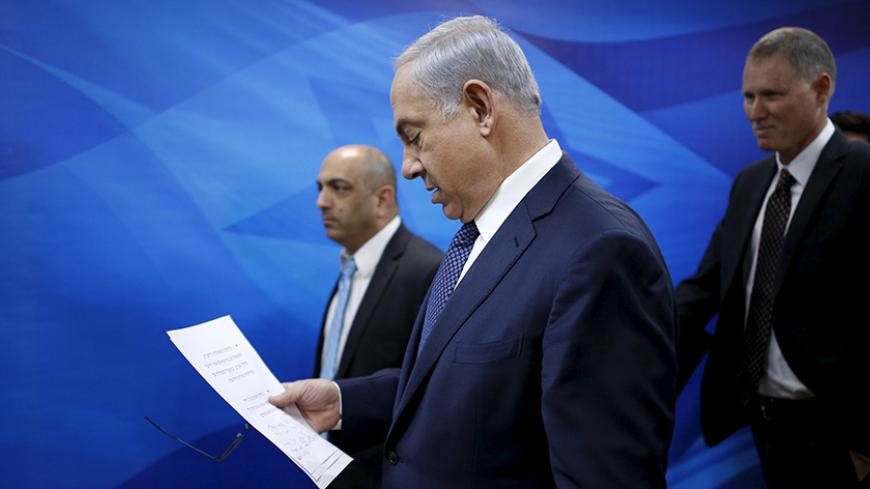 “We must prevent as much as possible the collapse of the Palestinian Authority, and at the same time we must prepare for the possibility that this could happen,” Israeli Prime Minister Benjamin Netanyahu said upon closing the Jan. 3 meeting of the diplomatic-security Cabinet, which discussed the warning of the security establishment that the days of the PA are numbered. The media has reported for many months that the Shin Bet, the Israel Defense Forces and especially the Civil Administration have been delivering worrying reports to the executive bodies, analyzing the state of the PA and the attitude of Palestinians toward the rule of President Mahmoud Abbas, who has invested great efforts to keep the PA’s institutions operational. These reports conclude that the days of the PA are numbered, given the diplomatic standstill.

In an Al-Monitor article, Uri Savir wrote that the senior members of Fatah and Abbas himself know very well how to read the political map, and they, too, have concluded that in the present situation it is only a matter of time before the PA is dissolved. As a result, it would not be able to pay its employee salaries, and it would lose the meager support it has among the residents of the Palestinian territories.

All of Abbas' warnings in the last year and the rumors spread within the PA that he has decided to resign from his post have been received in Israel with ridicule. They have been interpreted by the political class, and to some extent by many elements in the PA, as an attempt to exert pressure on Israel and to gain support from the international community. Threats of Abbas' resignation have become a common joke in the PA, and cartoons in Palestinian social media portray them as empty threats. One cartoon showed Abbas standing in front of a mirror saying “I quit,” with his image in the mirror replying, “And I refuse to quit.”

But now it seems that Abbas is serious. He has reached the conclusion that the PA cannot handle the internal crisis that started with the collapse of peace talks with Israel in April 2014, has continued despite the unity government with Hamas, which was established a few months after that, and has now reached a nadir with the “individual intifada.”

The third intifada reflects, among other things, ringing criticism of the rule of the PA, for not succeeding in getting anywhere with Israel. Most Palestinians aren’t satisfied at what they see as the daily humiliation of their leader by Netanyahu, while Abbas stubbornly continues to honor security cooperation with Israel.

The PA will not be able to continue to operate much longer, because it was built as a temporary body with weak structures, meant to hold for only five years — between the signing of the Oslo Accord (1993) until the establishment of a Palestinian state through permanent talks with Israel. Since the PA was established more than 20 years ago, its economy has existed by conditions Israel had determined in the Oslo B Agreement (1995). Israel controls all of the border crossings of the PA and its resources and energy sources. The Palestinians have no Palestinian currency; they are forced to use the Israeli shekel and are dependent on fluctuations in its value.

The PA’s permanent situation is between a rock and a hard place; it struggles against Israel and it is dependent on it. The PA’s budget is mostly based on tax revenues that Israel collects on its behalf from the import and export of goods, and the rest comes from donations from various countries, which have been significantly reduced in recent years.

If that is not enough, in recent years Israel has placed economic sanctions on the PA. Ehud Olmert was the first to freeze Palestinian tax revenues when he was prime minister, but Netanyahu has refined this method. Even though Israel is obligated to transfer these funds according to the Oslo B Agreement, Netanyahu has used them time after time as a means to pressure the PA — most recently in January 2015, after Abbas signed the formal request to have the PA be accepted as a member of the International Criminal Court at The Hague.

These funds — amounting to half a million shekels ($126 million) — were transferred after three months, when the Civil Administration signaled to Netanyahu and the Cabinet that continuing the freeze would stir up discontent among PA employees who hadn’t received a paycheck and bring about the collapse of businesses in the PA’s territories, which would embroil Israel in the mess, too.

For years, Israel has done all it can to weaken Abbas politically and diplomatically; he has been represented to the Israeli public as “a non-partner,” with whom there is no reason to conduct negotiations, which has enabled the continuation of the diplomatic freeze.

At the same time, Israel has never stopped weakening the PA and damaging it economically and politically for Israel's domestic motives. Netanyahu has humiliated Abbas and his senior officials by imposing sanctions against the PA whenever he felt like it. Israel has toyed with the Palestinian economy, sometimes just to placate Israeli public opinion.

Now that the threat of the PA’s collapse has become real and present, Netanyahu speaks differently. He sounds worried about the implications of processes that he is directly responsible for. The sense of urgency arising from the recent Cabinet meetings on the state of Abbas' rule is too little, too late. One can’t fix the mistakes of more than 20 years in one day. Abbas is 80 years old, he is hopeless and tired, and the forces that oppose him within the PA are stronger than ever. The current intifada will not allow Israel to open the border crossings and ease the economic situation of the Palestinians.

To save the PA, a drastic step toward a Palestinian state must be taken, based on permanent agreements, not the unstable patchwork agreements made in the course of debates on the Oslo Accord. But Netanyahu won’t take this big step. All that the present government in Israel can do — with the help of Europe or the United States — is to buy more time until the next big crisis. In the meantime, Abbas has heard the voices of concern from Israel, and responded to Netanyahu on Jan. 6, saying, “The PA is one of the achievements of the Palestinians. They won’t give it up, and no one should dream about its collapse."

He added, “The PA will remain and any replacement [for it] must be a state.” But a Palestinian state cannot be seen on the horizon at this time, and it is doubtful whether the chairman of the PA and its institutions could carry the burden of its huge deficit and the unrest on the Palestinian street for any length of time. If this situation does not change, it seems that soon Abbas will say out loud what he’s whispered to many for more than two years: “I can’t do it any longer.” This will be the moment Israel will be made to pay — with high interest — for the price of the power games it has played, and the mistakes it has made. ​