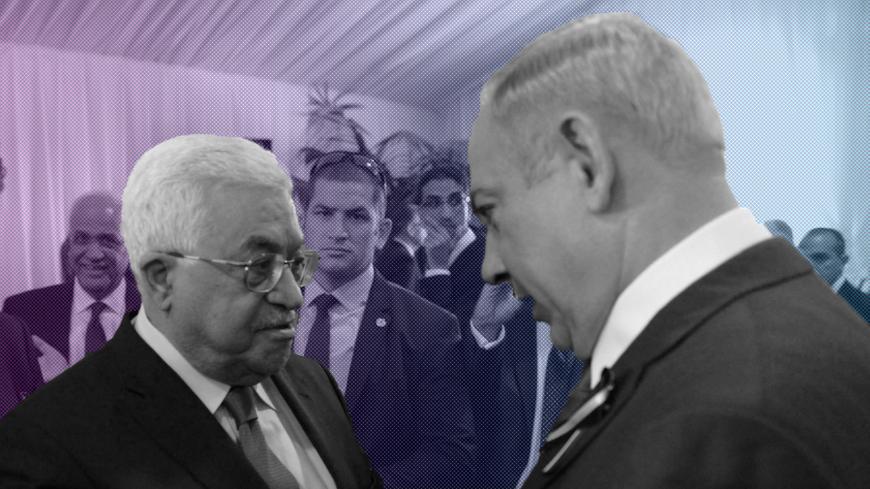 Israel has come up with a strange tactic: Imposing or supporting economic sanctions against the Palestinians, downplaying or ignoring the effects and then asking other countries to help save it from the repercussions just as they are about to blow up in its face.

With elections coming up April 9, Prime Minister Benjamin Netanyahu gave in to right-wing demands and on Feb. 17 presented his security cabinet with a plan to implement the so-called deduction law starting this month. Under the “pay to slay” law, adopted by the Knesset in July 2018, Israel will withhold duties it collects for the Palestinian Authority to offset the stipends the PA pays to Palestinian assailants who attack Jews and are imprisoned in Israel or to their families. The decision means an Israeli freeze of some 500 million shekels ($138 million) in customs and other taxes it collects for the PA under the terms of the 1994 Paris Protocol.

Much has been said in Al-Monitor and elsewhere about the law, Israel’s version of the Taylor Force Act adopted by the US Congress in March 2018. Proponents explain the justified ire at the PA for its support of terrorists, while critics argue the deductions are unlawful and slam Israel for equating the tax revenues due to the PA and the stipends to terrorists’ families. Israel, never known for calculating the long-term effects of its actions, is in a bind as it tries to prevent the PA’s collapse and a potential armed conflict with Palestinians in the Gaza Strip and West Bank, all on the eve of Israeli elections.

The Palestinians are gearing up for what they term a “Black March.” Palestinian President Mahmoud Abbas has announced he will reject any payment of the tax revenues if Israel deducts even a shekel. In other words, he has opted to exacerbate the PA’s economic plight and let Israel deal with the consequences.

If Israel does withhold from the tax transfer, the PA will probably be unable to pay its employees, increasing pressure on Gaza even further, and it will have to halt the stipends. PA employees, who constitute over 40% of salaried workers in the West Bank and are the driving force of its economy, could find themselves unable to pay their bills. The resulting economic downturn could lead to violence with Israelis in the West Bank, an escalation of the Palestinian protests along the Gaza border, an escalation in rocket fire from the Strip and unrest within Israel’s prisons.

In a similar vein, right-wing government ministers cheered the US administration’s decision last September to defund UNRWA, the aid agency that supports Palestinian refugees, and criticized the Foreign Ministry’s January 2018 warning against the consequences of aid cuts to the Palestinians.

“I expect all Israeli branches of government … to support a decision to cut funding to an organization which employs Hamas terrorists and uses its schools to hide rockets,” said Education Minister Naftali Bennett, as though unaware that without the UN aid, Gaza’s residents would starve to death. Following Washington’s announcement of the defunding, former US Ambassador Dan Shapiro said that senior Israeli defense officials had told him the move was a threat to regional stability and that Israel would pay the price.

Behind the scenes, Israel has been conducting damage control. While outwardly supporting the US move, Foreign Ministry officials engaged in quiet diplomacy, asking Germany to boost its funding to UNRWA. Germany, a member of the Palestinian donor group of which Israel is a regular member, agreed and increased its aid to $100 million.

The bottom line is that while Israel did not initiate the UNRWA crisis, the Netanyahu government celebrated President Donald Trump’s move without fully understanding its significance. The Foreign Ministry, rebuked by Bennett, moved in to try to avert the organization’s collapse and a humanitarian disaster in Gaza.

Now, with the same recklessness, the security cabinet had greenlit implementation of the deduction law, dealing an economic blow to the Palestinians despite warnings from the Ministry of Defense. Israeli diplomats are once again mobilizing to douse the flames.

The PA is preparing to send senior officials to Arab and European capitals to raise alternative funding for the revenues Israel intends to withhold. They will visit Germany, Qatar and Saudi Arabia, among other places. Qatar may be reluctant to sign up for the Palestinian effort after the drubbing it took for trying to help Gaza with cash payments. However, with Israel’s blessing and a push from the United States, the Saudis are expected to help at least until the PA recovers from the blow. Lo and behold, the enhanced Saudi-Israeli relationship is benefitting the Palestinians.

How much money the PA, with Israel’s behind-the-scenes help, will raise is unknown. It will likely manage to raise 500 million shekels ($138 million) to save the PA in the short term. However, the consequences of Israel’s injudicious move are tensions with the PA, which is threatening to cut off security cooperation with the Israelis, as well as a potential escalation on the Gaza border and unrest in Israel’s prisons.

Destruction with one hand while holding out the other for help fixing the mess: a unique Israeli tactic.