A tour of the West Bank city of Bethlehem makes it clear that the Palestinian and Israeli economies are intertwined. 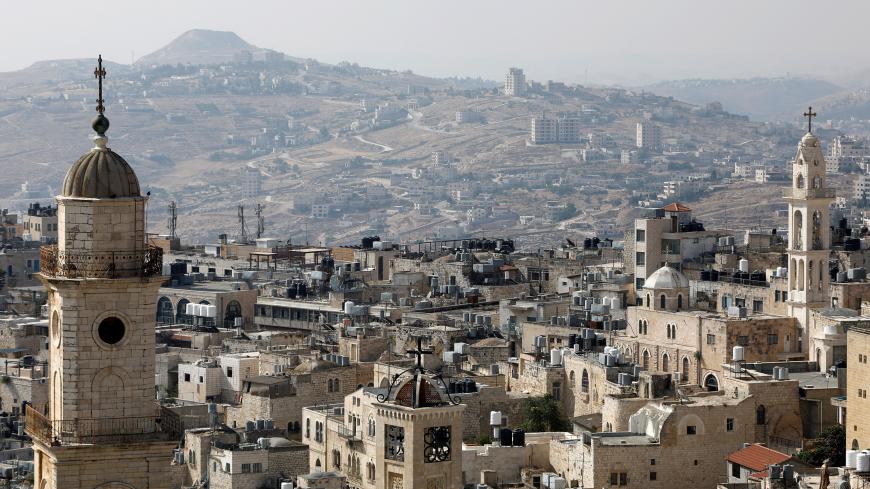 Israel and the Palestinian Authority (PA) reached an agreement Aug. 22 for the transfer of 2 billion Israeli shekels ($566 million) to the latter’s empty treasury. The agreement offers the PA an exemption from taxes for the gas it buys from Israel (applied retroactively to the past seven months), thus throwing an economic lifeline to the PA and its employees. It might even prevent a continued escalation in the West Bank.

The crisis began in February when Israel started to implement the Deduction Law, authorized by the Knesset in July 2018, by which it deducts about 45 million shekels ($12.7 million) a month from the taxes and customs it collects on behalf of the PA. In response, Palestinian President Mahmoud Abbas refused to receive the rest of the money collected on behalf of the PA — about a half billion shekels ($141 million) a month, which constitutes more than half of the PA’s monthly budget. All this led the PA to a grave economic crisis and a significant cut in salaries for its employees, including for security personnel. Even promised aid from Arab countries did not cover the enormous deficit.

The continued crisis led Palestinian Prime Minister Mohammad Shtayyeh to warn June 5 that without money security personnel would be fired and security cooperation and the joint fight with Israel against terror would then practically end. Following warnings from the Israeli security establishment regarding the collapse of the PA, Prime Minister Benjamin Netanyahu instructed Finance Minister Moshe Kahlon, the only minister in direct contact with the Palestinians, to find a solution for the crisis — which was ultimately reached last week. The solution at this stage is partial. The Palestinians still refuse to receive the money that Israel collected for them since the start of the year. It seems that the remainder of the solution will be worked out after the Israeli election on Sept. 17.

On Aug. 23, Rina Shnerb, 17, was killed by an explosion of a deadly device at the Dani Spring in the Benjamin region west of Ramallah; her father and brother were injured in the attack. On Aug. 28, it was reported in the news that according to Palestinian security sources they thwarted a bomb attack in the Mount Gerizim area close to Nablus, on a road where Israel Defense Forces vehicles travel. According to the report, Palestinian security forces increasingly estimate that Hamas is pushing for attacks in the West Bank and that it might succeed in training a local explosives expert. At the beginning of the week, Palestinian sources reported that Hamas is attempting to smuggle engineers into the West Bank and that the PA has identified attempts by Hamas to establish itself in the suburbs' surrounding cities — in Area C (under Israel’s control). That is, Hamas recognizes the efficacy of Palestinian security forces and thus prefers to hide its activities in villages outside PA control.

During the current crisis the PA considered taxing workers who leave to work in Israel. This possible move greatly worried the Israeli security establishment, which sees the employment of Palestinians as one of the most important drivers for security and a significant factor in ensuring the stability of the West Bank. A senior Israeli security official, in a conversation with Al-Monitor, described work in Israel as the PA’s main economic engine. According to him, the average salary of Palestinian workers who work in Israel, who provide for 75,000 households, is higher than 5,000 shekels ($1,400) a month, 2½ times the average salary in the PA. In all, these are millions of shekels a month that drive the PA; without them it would be paralyzed.

The demand for work authorizations in Israel is growing. The number of Palestinian workers now employed in Israel and the industrial zones in West Bank settlements is also steadily growing. At the beginning of the year, up-to-date equipment was installed at the crossings through which workers enter Israel and the wait time has decreased from hours to minutes.

On a tour I recently made in the West Bank city of Bethlehem, I discovered an additional industry important for both Israel and the Palestinians: construction material. Next to the Dheisheh refugee camp is the cement block factory of Issa Makarker, which provides a large portion of the concrete blocks for big projects in the Jerusalem region. The factory, mechanized and automatic, provides work and a livelihood to dozens of Palestinians. Makarker said that salaries in the private sector are higher than those in the public sector, that is for PA employees. According to him, demand for his blocks from Israel is growing all the time, since he can offer good prices because of his relatively low expenses on wages and taxes, compared to Israeli factories. “I contribute to lower housing prices in Israel,” he joked.

Another important industry is tourism. Issa Rishmawi, the owner of a travel agency in Bethlehem, has close contacts with Arkia and Flying Carpet, two of the largest travel companies in Israel. A significant portion of tourism to Israel is Christians who are interested in visiting holy sites. Without cooperation with the PA and Palestinian travel professionals in order to enable visits to the Church of the Nativity, this tourism to Israel would be damaged. This cooperation is productive, and in 2017 Palestinian territories saw the greatest relative jump in tourist entry in the world.

The PA is economically dependent on Israel, but Israel also has economic and security interests in the stability and prosperity of the PA. This is the context for the agreement between Israel and the PA that enabled it to transfer 2 billion shekels after long months of refusal to accept money from Israel, in the hope that after the election a comprehensive solution to the problem would be found.