The stabbing of an off-duty Israeli soldier at a West Bank settlement stuns the nation; the Hebrew-language media points fingers at Hamas. 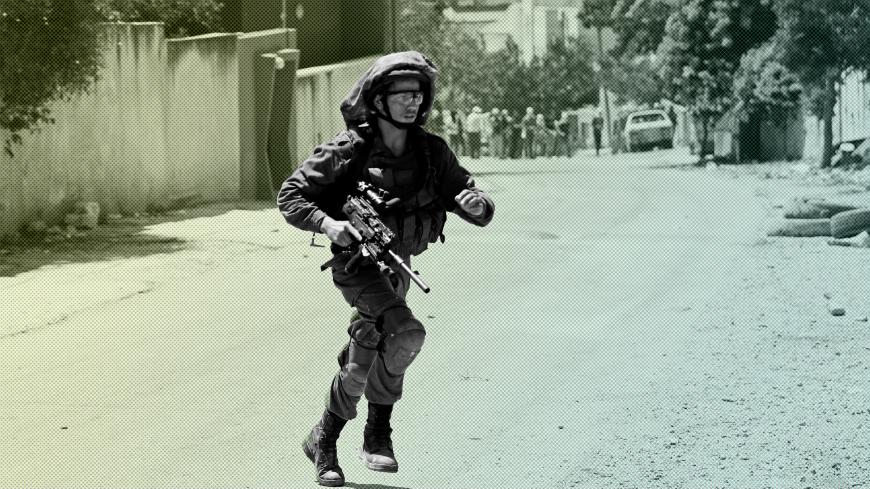 An Israeli soldier runs during a Palestinian protest against the nearby Jewish settlement of Qadomem, Kofr Qadom, West Bank, Aug. 9, 2019. - REUTERS/Mohamad Torokman

RAMALLAH, West Bank — The Israeli army deployed large numbers of troops in the West Bank the morning of Aug. 8, turning it into a military zone after the discovery of the body of an off-duty Israeli soldier, Dvir Sorek, 18, in the Gush Etzion settlement near Bethlehem. Sorek had been stabbed to death.

Following the discovery of Sorek’s body, the Israeli army scoured the town of Beit Fajjar, south of Bethlehem, combing agricultural lands and going through surveillance camera tapes from the town entrance in an attempt to identify the perpetrators. The army raided several areas in Bethlehem and Hebron and closed the main roads between the southern West Bank cities Aug. 8.

Meanwhile, settlers launched sporadic attacks in various areas of the West Bank, most notably on the Gush Etzion roundabout where they hurled stones at Palestinian vehicles and near the village of al-Laban, north of Ramallah, where Palestinians' cars were damaged. A Palestinian was injured in Hebron after his car was stoned. In the most recent such attack, on Aug. 10, settlers attacked the family of Shaker al-Tamimi east of Hebron. No casualties were reported.

On the same day the Israeli army arrested four Palestinians, including a woman from Beit Kahel, in the west of Hebron. The army also seized one of the suspect’s vehicles. After a few hours, the Israeli General Security Service (Shin Bet) said two of the arrested Palestinians — Nazir Saleh Khalil Asafra, 24, and Qasem Araf Khalil Asafra, 30 — were behind Sorek’s murder and that investigations were ongoing.

Nevertheless, the killing dealt a heavy blow to Israeli intelligence for more than one reason. Israeli security forces were not informed of Sorek’s disappearance until three hours after contact with him was lost. His body was found after 6½ hours of search. All this gave the perpetrators enough time to hide. Also, the attack happened in an area just meters away from the settlement and kibbutz of Migdal Oz, which is surrounded by security and surveillance equipment. Sorek was attending yeshiva (seminary) there. The attack came as a surprise for the Israeli intelligence establishment, the army and the Shin Bet, according to Israeli Channel 13.

Israeli media rushed to point fingers at Hamas. Israel’s Mako Channel 2 said Aug. 8 that the killing appeared to have been carried out by direct orders from Hamas in Gaza. Hours after the discovery of Sorek’s body, Hamas issued a statement of support and praise. The statement said, “We praise our people’s heroic fighters who executed the heroic operation that killed a soldier in the occupation’s army, who was studying at a military college known for graduating extremists with Talmud and Torah dogmas advocating the killing our people and seizing its lands.” Hamas, however, did not claim responsibility for the attack.

Two days before the Gush Etzion attack, the Shin Bet announced that an operation planned by Hamas in Jerusalem had been foiled. The agency said in a statement that it had recovered an explosive device and raided a weapons laboratory in Hebron. Two months ago, Israel had arrested Palestinian Tamer Rajabi, 22, who admitted that Hamas in Gaza recruited him for the mission.

The Shin Bet also revealed July 3 the arrest of a Hamas explosives expert in Gaza who was in Israel under a medical permit. The agency said Fadi Abu al-Sabah, 35, was trained for a year by Hamas' military arm in Gaza to set up an explosives laboratory in the West Bank.

The accusations leveled against Hamas come in light of the Israeli army's estimates that the attack in Gush Etzion was not spontaneous and was orchestrated by a cell that planned and prepared for it, the Israeli Kan 11 channel said Aug. 8.

The channel spoke of Israeli fears that the same group might carry out another operation before being arrested and of concerns about other, similar operations. This prompted the army to send reinforcements to the West Bank.

“Hamas and the Palestinian people are in a state of permanent confrontation [with Israel], be it peaceful or with knives,” Hamas leader Yahya Moussa told Al-Monitor. “What is happening is a natural reaction to what Israel is doing. Confrontation with Israel will continue. Israel is always seeking to mobilize international and regional opinion against a [Palestinian] party and finds that the easiest party to indict is Hamas.” He did, however, say, “Our people and factions bless these operations.”

Of note, If Israel officially declares that Hamas in the Gaza Strip was behind the attack, this would be an additional step forward toward a full-fledged military confrontation. Israeli Prime Minister Benjamin Netanyahu, who visited the site of the killing — after visiting the settlement of Beit El near Ramallah to lay the foundation stone for 650 new housing units — and said Israel will “settle the score” with the perpetrators and those who sent them. This brings back to mind the scenario of the 2014 war, preceded by the kidnapping and killing of three teenage settlers in the city of Hebron.

Moussa said Israel does not need justification for waging war since this is a matter decided according to its internal calculations. “The current situation is different from the situation in 2014. Israel is now unable to bear the consequences of any war it may wage, especially as it is unable to predict guaranteed results to such a war. Israel will not be able to keep any potential war with Hamas from spilling into a regional confrontation. It does not have answers to justify letting the Israeli army drown in the Gaza quagmire.”

The killing of Sorek showed the inability of Israeli security services to stop rogue attacks in the West Bank that are not openly claimed by Palestinian factions. Such attacks started taking a stronger turn in the past year, such as the shooting operation east of Ramallah that killed two Israeli soldiers Dec. 13.

Military expert and former PLO artillery commander Wassef Erekat told Al-Monitor, “The Gush Etzion attack took place in a heavily secured area fitted with all means of security surveillance and monitoring, along with the permanent presence of military patrols. This indicates the development of the mentality of the perpetrator or perpetrators of the attack, who had the boldness to execute their mission and disappear.”

He said, “Palestinian youth are inventing sophisticated and superior confrontation methods. If the Israeli army and its security and intelligence services with all of their technology, soldiers, patrols and monitoring means could be defeated by a young man or two who carried out such an operation, this only proves that Israel has been failing to draw any lessons from previous attacks.”

Erekat added, “These are individual operations planned and implemented on a limited scale. It is difficult for Israel to deter or prevent such operations. Whether planned or not, I believe these attacks will continue. Israel will not be able to break the will of the Palestinian people. Everything Israel is doing to the Palestinian people will blow up in its face.”