Is Hamas producing weapons in the West Bank?

Israel is concerned by discoveries of large weapons workshops and militant cells over the past year in the West Bank. 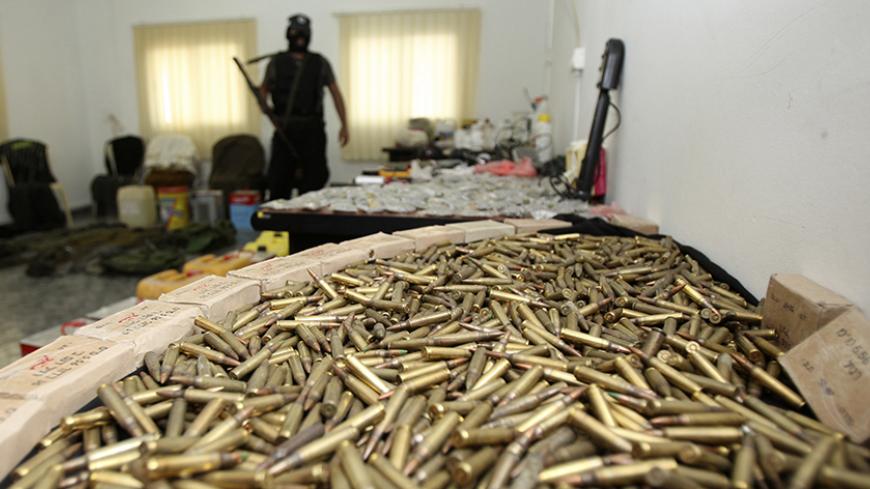 Ammunition and explosives are displayed during a news conference held by the Palestinian security forces following a raid on a Hamas bomb factory in the West Bank city of Hebron, Oct. 12, 2008. - REUTERS/Nayef Hashlamoun

The wave of Palestinian attacks against Israelis that began in October 2015 has greatly receded. The most recent ones occurred Dec. 30, when a girl attempted to stab Israeli soldiers at the Qalandia military checkpoint near Ramallah; Jan. 3, when two Israeli soldiers were wounded by a driver who ran over them near the Jalama checkpoint, north of Jenin; and Jan. 8, when four more soldiers were killed in a truck attack in Jerusalem. These types of attacks have been accompanied by a gradual increase in the use of firearms, including a Dec. 19 incident in which an Israeli settler was shot and wounded near the Beit Aryeh-Ofarim settlement.

On Dec. 21, the Israeli army announced the discovery of a large weapon mill in Hebron capable of producing a variety of arms. The Israeli army is currently investigating possible connections to Hamas. The workshop contained 12 lathes and hundreds of weapons and combat gear. The Israelis also discovered equipment used to manufacture knockoff versions of US-made M-16 rifles and sniper rifles, a first in the territories, and unfinished Russian rifles capable of hitting targets at 600 meters (656 yards). Earlier in 2016, the army had discovered an armory of 40 lathes for arms production and confiscated 420 weapons and assorted gear.

Wasef Erekat, a retired commander of artillery forces for the Palestinian Liberation Organization, told Al-Monitor, “The discovery of the weapons workshops and militant cells is an Israeli narrative that is yet to be confirmed by Palestinians. But Israel is blocking any Palestinian attempts to produce weapons, as it recognizes the threat from local manufacturing like that in Gaza, where Palestinians indeed succeeded in producing such weapons and mortar shells starting in early 2000. Israel also fears such military production could move to the West Bank. Such a scenario would represent security threats given the proximity of Palestinian and Israeli cities.”

Erekat added, “Palestinian factions face great difficulty in importing arms from outside the occupied Palestinian territories, which led them to craft their own in weapon mills and metal workshops. Amid the ongoing political stagnation with the Palestinian Authority [PA], everything is possible in Israel, including armed attacks with the PA turning a blind eye.”

Israel Hayom reported on Aug. 12 than an increase in the number of weapon mills on the West Bank had contributed to more combat gear among Palestinians up to a total of some 10,000 weapons of various kinds. Prices have decreased as a result. An authentic US-made M-16 or a Russian Kalashnikov sells for $13,000, while the lower-quality, smaller and cheaper imitation Carlo rifles can be had on the black market for around $770. Due to Israeli security operations, the price of locally made Carlo rifles has reached $1,300, although high-quality internationally produced versions are being sold for $4,000.

Hussam Badran, a Hamas spokesman living in Qatar and a former leader of the Izz ad-Din al-Qassam Brigades, Hamas’ military wing, in the northern West Bank, told Al-Monitor, “Palestinian resistance operations are very complicated due to the constant pursuit of Israel and the PA. However, there have been some accomplishments and significant attacks recently. It is easy for the occupation forces to arrest some armed groups, whether before or after conducting attacks, but they often exaggerate these successes to calm Israelis and demoralize the Palestinian people. Thanks to the experience gained over the years, Palestinian fighters can now dodge the threats of security coordination between Israel and the PA and acquire new tools for the resistance.”

On Dec. 23, Shin Bet announced that it had dismantled a 20-member Hamas-affiliated cell in Nablus that had allegedly been planning suicide attacks in Jerusalem and Haifa and shootings on the West Bank. Most of the cell members were former prisoners who had recruited four attackers for the planned bombings. The four would-be bombers were also arrested. On Jan. 3, the Israeli army announced the arrest of another Palestinian cell, whose 15 members lived in Hebron and Bethlehem and manufactured and sold arms.

Israeli military expert Amir Bohbot wrote for Walla Dec. 15 that the increasing number of shooting incidents targeting settlers’ cars is the main threat Israel is dealing with in the West Bank. In recent months, he said, Israeli security received warnings by intelligence services about a possible increase in Palestinian attacks with firearms, leading the Israeli army to dispatch troops at the main crossroads of the West Bank, set up random checkpoints and security posts, and intensify data collection in coordination with the PA.

Hani al-Masri, head of the Palestinian Center for Policy Research and Strategic Studies — Masarat, told Al-Monitor, “With arms smuggling blocked through tunnels to the West Bank and Gaza, Palestinian armed groups have resorted to localized arms production despite security operations by both the PA and Israel. I don’t think the PA is overlooking signs of possible armed attacks by Palestinians, as this contradicts President Mahmoud Abbas’ agenda [and his] desire to gain the approval of the international community by rejecting armed activities.”

Israeli columnist Nadav Shragai speculated in Israel Hayom Aug. 12 that the dream of al-Qassam Brigades leader Salah al-Aruri is to reach a stage where missiles are produced in the West Bank as has happened in Gaza.

A Palestinian security official speaking on condition of anonymity told Al-Monitor, “The PA is concerned about the spread of arms, as its true goal is to enjoy a monopoly on arms in the Palestinian territories, which would be the PA's weapons in the hands of official Palestinian security forces. The PA seeks to prevent any armed group from getting hold of weapons, even under the pretext of resistance and military activities against Israel. These armed groups may use the weapons as a cover for their real goal, which is to spread chaos in the West Bank. We won’t allow that.”

Israeli discoveries of weapon mills and militant cells on the West Bank are unlikely to deter Palestinian factions from continuing to make weapons or from forming new armed groups despite concurrent intensified crackdowns by the PA and Israel. The security situation today in the West Bank suggests that Palestinian factions and Israel are racing against time to further their plans against one another before the other acts.