What triggered Hamas' attacks on the West Bank?

Hamas has claimed responsibility for recent deadly attacks on the West Bank, raising tensions and expectations of more to come. 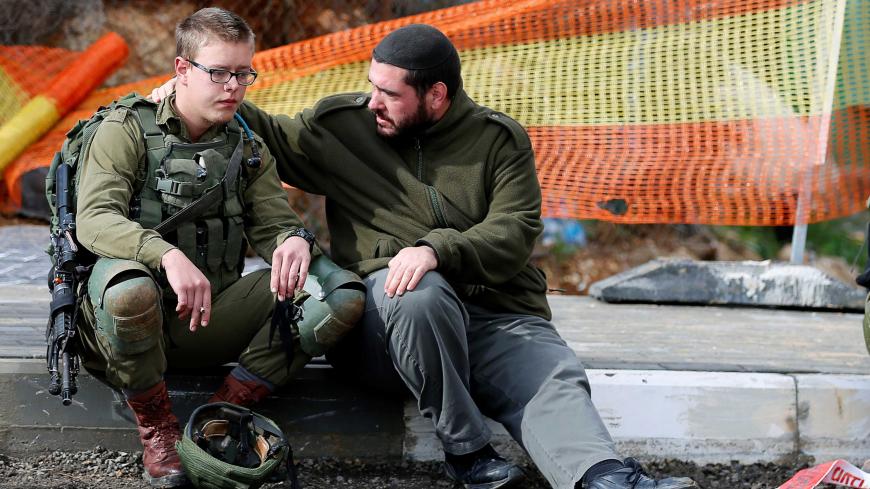 An Israeli soldier is comforted at the scene of a shooting attack near Ramallah, Israeli-occupied West Bank, Dec. 13, 2018. - REUTERS/Ammar Awad

GAZA CITY, Gaza Strip — Amid a general uptick in Palestinian attacks against Israelis on the West Bank, at least two deadly attacks claimed by Hamas have raised speculation that the movement has activated cells to put pressure on Israel and the Palestinian Authority (PA).

Hamas’ military wing, the Izz ad-Din al-Qassam Brigades on Dec. 13 claimed responsibility for the Dec. 9 shooting attack near the Ofra settlement, east of Ramallah, that wounded 11 Israelis. The group also took responsibility for an Oct. 7 incident at the Barkan settlement in which a Palestinian who worked in a nearby Israeli factory shot and killed two settlers and wounded a third. The brigades threatened to carry out additional attacks.

The Israeli army conducted raids and arrests on Dec. 11, and during Dec. 13-14 apprehended and shot and killed the perpetrators of the October and December attacks. Later on Dec. 14, two Israeli soldiers were shot and killed, and others wounded, near Silwad, north of Ramallah, by a man Israeli authorities believe to be affiliated with Hamas and who remains at-large.

The increase in violence comes after Israeli military Chief of Staff Gadi Eizenkot warned in mid-September of a possible implosion on the West Bank. According to data released by Shin Bet Dec. 13, the number of attacks by Palestinians against Israeli soldiers and settlers there totaled 64 in August; 70 in September; 95 in October; and 114 in November. The perpetrators used knives, guns, rocks and Molotov cocktails.

These incidents represent a challenge to the Israeli and Palestinian security services, which in recent years have thwarted such attacks on the West Bank and have been able to dismantle Hamas cells there. With the PA stuck in the middle, as it were, the office of President Mahmoud Abbas on Dec. 13 condemned the violence of both sides.

Some Palestinian observers believe that Hamas is possibly seeking through its attacks to increase pressure on Israel to move forward with talks on a long-term truce, which had been ongoing but then stalled after a two-day military confrontation, Nov. 12-13, in Gaza.

Mahmoud Mardawi, a Hamas leader and former military official in the Qassam Brigades, told Al-Monitor that the attacks were in response to Israeli settlers constantly attacking Palestinians and the Israeli army raiding Palestinian areas and dragging arrested Palestinians from their homes at night. The ever-expanding settlements are also a factor. He claimed that Hamas and other Palestinian factions have a network of cells in the West Bank capable of striking at the Israeli army and settlers at any moment.

Mardawi denied the possibility that Hamas' attacks will harm the attempted reconciliation with Fatah, which he characterized as stalled due to Fatah's intransigence and its rejection of a political partnership with Hamas. He charged that the PA had threatened to impose more punitive measures on Gaza, such as halting government support for Gazans estimated at $96 million a month, in an attempt to incite the Palestinian street against the movement.

On Dec. 14 in Hebron, Palestinian security services violently suppressed a Hamas-led demonstration in support of the recent armed attacks. An unspecified number of protesters were arrested and released.

“The security services will not allow any Palestinian entity to tamper with internal security and ignite [the situation in] the West Bank for its own objectives,” a high-ranking security source told Al-Monitor, speaking on the condition of anonymity. “Such a situation would be used by Israel as an excuse to reoccupy the West Bank.”

He noted that coordination remained ongoing between the Israeli and Palestinian security services and that the PA has the ability to end it, if it so desires. The main problem threatening security coordination, he said, are the Israeli army’s incursions into PA-controlled areas without first coordinating with the Palestinian services, in addition to attacks and threats by settlers against Palestinians. He said that on Dec. 11, settlers had called for killing Abbas, publishing posters to that effect.

Wassef Erekat, a former artillery commander for the Palestine Liberation Organization, told Al-Monitor that the cells that carried out the recent attacks are militarily trained. He cited as proof of this the accuracy of the attacks and the perpetrators' ability to withdraw and disappear. He noted that it had taken Israel a long time, some 60 days, to catch one of the attackers. Erekat believes Hamas is preparing to be able to take additional action against Israelis, so he is expecting increasing tensions on the West Bank.

Akram Atallah, a political analyst and writer for the daily al-Ayyam, told Al-Monitor that Hamas had timed its attacks in light of the anniversary of the movement's founding, Dec. 14. Hamas is sending a reminder to Israel that it will still conduct armed operations.

Atallah also said the attacks are embarrassing for the PA, which is being made to look like a bystander in the struggle against Israel and to not have a handle on the security situation in the West Bank. He claims that the PA is aware that Hamas, while seeking a truce in Gaza with Israel, at the same time wants a military escalation in the West Bank with Israel to punish the PA for its actions against the movement.

Israel is deploying more troops and erecting checkpoints in West Bank cities and intensifying intelligence operations to thwart possible attacks. The Israeli security establishment is predicting a continuation of the current uptick in attacks amid calls for a swift halt to them before it is too late.