Israel is growing concerned about Palestinian factions’ attempts to manufacture rockets inside the West Bank. 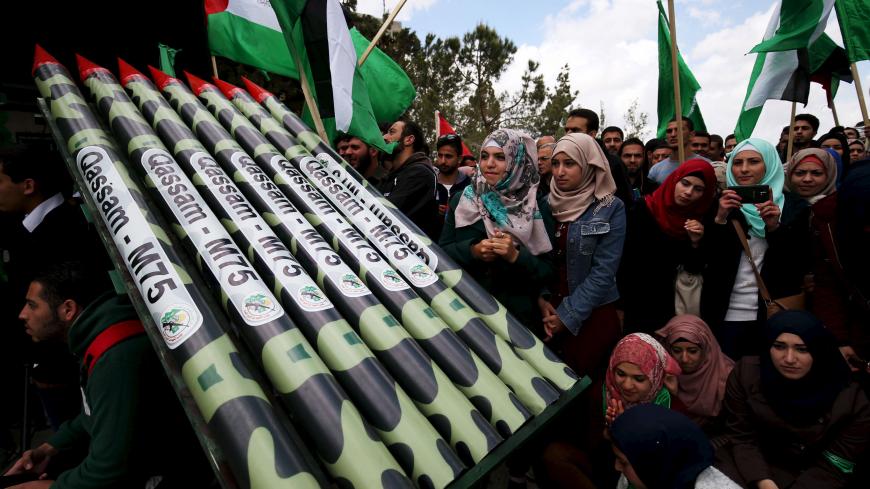 Palestinian Authority (PA) security forces reportedly seized evidence recently that the Palestinian Islamic Jihad (PIJ) is trying to build rockets in the West Bank to attack Israel. The evidence included a prototype of a handmade, primitive rocket and missile, built from a hollow tube and potassium nitrate.

Three PIJ members were arrested in Tulkarm, the West Bank, according to Palestinian security officials who spoke on condition of anonymity with Israeli Channel 12. The station revealed Sept. 23 that the patrols also confiscated tools designed to manufacture rockets.

The sources said PIJ members had received instructions from Lebanon on how to make and operate rockets. The sources did not say whether the instructions were provided by the PIJ or Hezbollah command in Beirut, or how.

According to the same sources, the members of the cell admitted during questioning that they were trained by Iranians. However, the rockets they planned to manufacture were not advanced.

The Israeli army has been concerned about the threat of terrorist groups expanding their rocket-making efforts from the Gaza Strip into the West Bank, and fear the prototype seized in Tulkarm might be a preview of attempts to manufacture advanced weapons to strike Israeli residential compounds, the report said.

In 2008, 2009 and 2010, Hamas tried to expand its rocket manufacturing from Gaza into the West Bank. However, its attempt failed because the PA and Israel were able to seize pieces of rockets in some West Bank areas. Meanwhile, Israel and the PA occasionally launch an arrest campaign against blacksmiths, because the rocket prototypes are made in smithery workshops.

Hamas leader and former military chief Mahmoud Merdawi told Al-Monitor, “Israeli intelligence is fiercely fighting [resistance groups'] attempts to find infrastructure for rocket-building, and it is questioning every suspect to discover the whole truth. These attempts to build rockets will eventually succeed and will constitute a strategic turn in the path of the resistance.”

He added, “It's no secret that the resistance is coming up with new ways of fighting and manufacturing weapons in the West Bank, like personal and light arms and explosive devices. Israel continues to close suspicious lathe workshops, and the resistance is buying explosives and ammunition from Palestinian and Israeli arms traders in exchange for rewarding sums of money.”

Palestinian factions know they could easily launch rockets from West Bank farmlands and mountain summits without needing high-tech equipment or rockets that can travel long distances.

A Palestinian security official in the West Bank told Al-Monitor on condition of anonymity, “The PA won't allow any illegal arms in the West Bank, and it refuses to allow any simulation of the Gaza experience in terms of the numbers of weapons and sources, including explosives and rockets. We are not a state and should not have these weapons. We don't need them.”

The Jerusalem Center for Public Affairs had said in June that Iran offers continuous support to Palestinian factions in the West Bank to manufacture rockets.

Israel Hayom newspaper on June 5 reported that prominent Iranian leaders were calling for replacing the stones used as weapons by West Bank Palestinians with rockets, as it is in Gaza.

Although long technological strides separate the Israeli army’s accurate rockets from the primitive ones Palestinians are trying to make in the West Bank, one rocket can terrorize thousands of Israelis in the West Bank. Such is the case with the settlers of the Gaza envelope, despite the rudimentary rockets’ inaccuracy and low cost.

But Palestinian military expert and former artillery unit commander at the PLO Wasef Erekat told Al-Monitor, “Attempts to manufacture rockets in the West Bank don't endanger Israel, which is able to enter any stretch of land there. Besides, military production requires security and stability, which is missing in the West Bank. Meanwhile, in Gaza, there is no Israeli military presence on the ground.”

He added, “The West Bank isn't ready for real and serious manufacturing of rockets, and there is no credibility or logic in using rockets from the West Bank on Israel, because the Israeli response would be destructive for Palestinians. The losses incurred by such a weapon would outweigh its gains, and it would not benefit Palestinians.”

The road does not seem paved for Palestinian factions to manufacture rockets in the West Bank. They have to search for explosive material and tools, create and assemble the parts, and then assign roles in the field and assume responsibility for the final rocket-launching.

These key tasks face obstacles like the constant presence and intense scrutiny by the Israeli army in the West Bank and its coordination with Palestinian security forces. Still, the simple nature of these rockets is actually their strong point: They are hard to detect with high-tech equipment.

"The rockets’ arrival to the West Bank is 10 times more dangerous than in Gaza because of the proximity between the West Bank and Israel, the high elevations of the West Bank and its [favorable position from which] to strike vital Israeli targets," Imad Abu Awad, an expert on Israeli affairs at Vision Center for Political Development, told Al-Monitor.

“Israel is convinced that Iran supports the resistance in the West Bank, like in Gaza, and that the factions personally manufacture the rockets and seek aid from Israeli traders to buy the [components]. The efforts of the PA and Israel to foil attempts to manufacture rockets won’t succeed all the time, which means that other cells have not been discovered yet.”

Israel's concern about attempts to produce rockets in the West Bank will lead it to increase its security activity there and promote coordination with the PA. Meanwhile, Palestinian factions will push harder to achieve their goals.