Israel announced the arrest of dozens of people allegedly involved in the production of weapons in the West Bank. 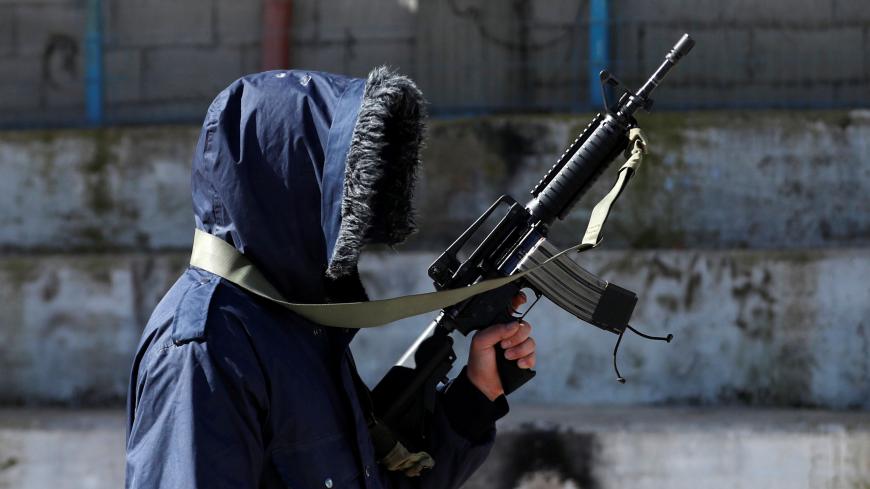 A Palestinian gunman holds a weapon during the funeral of Palestinian Yazan Abu Tabekh, who was killed during an Israeli raid in Jeni, Israeli-occupied West Bank, Feb. 6, 2020. - REUTERS/Mohamad Torokman

RAMALLAH, West Bank — Israeli police revealed Feb. 25 the arrests of 58 Palestinians suspected of belonging to a network that transforms airsoft guns into assault rifles. The police claimed that some of these rifles were used during attacks against Israelis in the West Bank and Israel.

The Jerusalem Post cited the Israeli police spokesman as saying that most detainees hailed from Hebron in the southern West Bank. So far, seven of them have been indicted and 300,000 shekels ($87,000) have been frozen in bank accounts, according to the paper. Two airsoft weapon shops in Kfar Kinna within the Green Line and Kafarakab near Ramallah have been shut down.

Israeli police accused those arrested of purchasing airsoft weapons from Israel and buying parts online from abroad to convert airsoft weapons into M16s in underground labs.

The police clarified that they had seized, in cooperation with the Israeli Tax Authority, a product container that reached Ashdod Port through the United States carrying electrical devices and toys. Upon searching the container, they found hundreds of hidden M16 parts and combat equipment that a citizen from Adna in Hebron had purchased.

As per the 2017 decision of the Central Command unit in the Israeli army in 2017, security forces have beefed up their search of airsoft rifles since 2017, after they were increasingly being converted into real weapons to wage attacks on soldiers and settlers. The decision banned the acquisition of devices, including those that could be turned into weapons.

Weapons in the West Bank are used for two different purposes: weapons used in attacks against Israel, which are few and locally made due to ongoing pursuit from the Israeli army and the Palestinian security forces, and automatic machine guns like Kalashnikovs and M16s that families and tribes mostly use in internal disputes and that are smuggled from Israel.

Fadi Nahas, a researcher of Israeli national security and army affairs at the Palestinian Center for Israeli Studies, told Al-Monitor that the Israeli army’s strategy aims at banning any weapon production, through security coordination with Palestinian security forces.

Nahas added that Israel refuses any attempts at primitive weapons production because it is well aware the weapons might be used against it.

Since October 2015, when the Jerusalem uprising broke out, Israel has been waging a campaign on hundreds of carpentry and lathe workshops in the West Bank, under the pretext that they are attempting to turn toys into rifles and manufacture local weapons known as Carlo rifles, whose production Israel is trying to halt. Lathe machines were confiscated from a carpentry workshop in Hebron Feb. 26.

Carlo rifles are local imitations of the Swedish Carl Gustaf submachine guns. Palestinians used them in several operations against Israeli soldiers, with the Jerusalem intifada onset. They turned airsoft rifles into regular ones and manufactured the Carlo because it is not costly and is easy to make compared to other weapons like the M16 or Kalashnikov, which are rare and could cost up to $20,000.

Meanwhile, supporters of Palestinian factions in the West Bank have been producing personal weapons or bombs or even trying to manufacture simple versions of rockets locally to conduct operations against Israel. Israeli Channel 12 revealed Sept. 23, 2019, that the Palestinian Authority foiled attempts by Palestinian Islamic Jihad to manufacture rockets in Tulkarm in the northern West Bank.

Palestinian and Israeli traders, especially within the Green Line, have not stopped smuggling arms from and into the West Bank in exchange for large sums of money. The Israeli police reported Jan. 27 that 22 people were arrested, including six soldiers from the Israeli army, eight Israelis from within the Green Line and eight Palestinians, for their alleged involvement in a weapons smuggling network from the West Bank to the Israeli territories. The soldiers at the inspection checkpoints were suspected of being bribed with thousands of shekels to allow the passage of merchandise.

Israel is the main source of arms for the West Bank since it controls all crossings and outlets. Still, some attempts to smuggle weapons from Jordan to the West Bank exist.

In April 2019, Israel announced that it foiled the smuggling of weapons (31 guns and automatic rifles) from Jordan to the West Bank and arrested four people in Al-Aghwar after they took the weapons from a Jordanian citizen.

In February 2019, Israeli police seized 37 guns that were being smuggled from the northern Jordan Valley to the West Bank.

Palestinian police spokesperson Louay Erzikat told Al-Monitor, “Security forces want to seize unlicensed weapons and hold their owners and traders accountable because they are arbitrary weapons used in weddings [for celebratory fire], family feuds and crimes, and we are trying to control their spread.”

Erzikat added that Israel is the source of weapons in the West Bank since it controls the borders and crossings. Weapons enter the West Bank through arm traders within the Green Line.

He noted that Israeli authorities are turning a blind eye to arms smuggling to the West Bank, especially those used in internal Palestinian disputes. He explained, “The southern area of Hebron has been the stage of almost daily armed disputes between families that often occur before the eyes of the Israeli army. The clashes are only a few meters away from settlers; still, the Israeli army neither interferes nor allows Palestinian security forces to enter the area to control the situation. The Israeli army is also overlooking weapons traders and entry of weapons to Palestine for local use.”

In May 2019, Erzikat said that the Palestinian security forces were confiscating on average 600 to 1,000 weapons per year.

The Israeli army’s quest to confiscate weapons in the West Bank reflects security concerns in Israel as well as fears of the deteriorating security situation in the West Bank and a new uprising in the next months with the implementation of the provisions of the US peace plan.