Iran has been very busy on the world stage recently, but it is reiterating its intention to provide weapons to Palestinian factions in the West Bank to help them carry out operations against Israel. 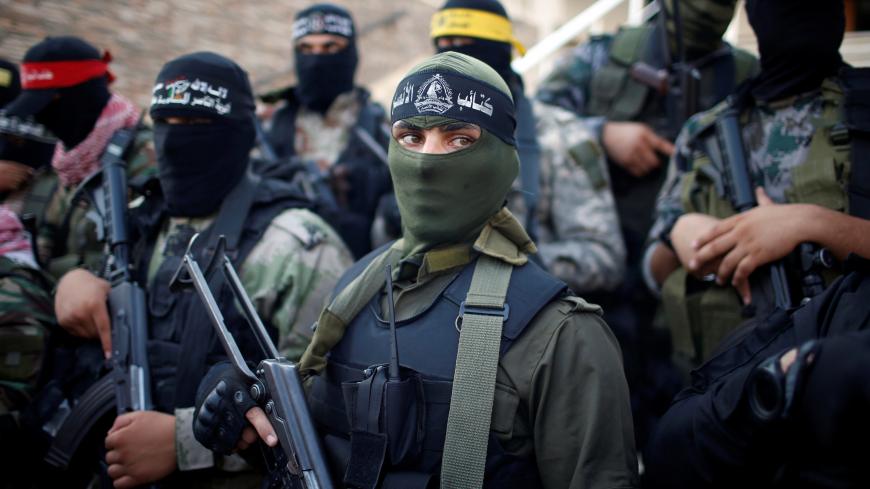 GAZA CITY, Gaza Strip — Tehran is well aware that Israel has a weak spot when it comes to the winding West Bank border, making the West Bank a strategic location in the conflict between Iran and Israel. Iranian officials have repeatedly declared that despite the geographical and logistical challenges of delivering weapons to Palestinian factions in the area, arming these groups remains a priority.

This comes amid increasing Israeli attacks on Iranian targets in Syria and as Israel implements security operations inside Iran — the latest being Mossad's seizure in January of secret documents from Tehran related to the Iranian nuclear program.

Jordan and Israel both forbid arms movement across their borders into the West Bank. Also, the Palestinian Authority (PA), which controls the West Bank, doesn't permit arms proliferation among the factions there. These restrictions make it difficult for Iran to achieve its goals. Iran so far has failed to transfer missiles to Palestinian factions in the West Bank, but it's not giving up, Yahya Rahim Safavi, a senior military adviser to Iranian Supreme Leader Ayatollah Ali Khamenei, announced June 6.

“The issue remains on the Iranian agenda under the supervision of [Khamenei], who continues to guide the leaders of [Iran's Islamic Revolutionary Guard Corps] in this framework, especially its Quds Force,” Safavi said.

Hussein Sheikh al-Islam, an adviser to Iran's foreign minister, told Al-Monitor Iran believes that to eliminate Israel all the fronts surrounding it must be armed to be effective, like the fronts of Lebanon and the Gaza Strip.

Islam said Iran is up to the challenge of getting weapons through to the factions.

"This is a military and intelligence issue, and we know how to deliver weapons to the West Bank. We have already delivered weapons to other fronts,” Islam added.

The Jerusalem Center for Public Affairs in Israel said in a June 6 research paper, “Iran has yet to fulfill its aspirations to arm the West Bank, and these aspirations remain at the top of the Iranian regime’s concerns. The Quds Force, led by Qasem Soleimani, is deploying a lot of effort in this regard.”

In December 2017, Soleimani reportedly asked commanders of the armed wings of both Hamas and the Palestinian Islamic Jihad to start recruiting members to receive the arms Iran would smuggle into the West Bank.

Israel announced in late February and mid-April of this year that it had seized two arms shipments near the Jordanian border on their way to the West Bank. The shipments contained dozens of pistols and automatic rifles. However, Israel didn't reveal who was behind the smuggling attempt.

The PA, based in Ramallah in the West Bank, doesn't hide its opposition to all Iranian efforts aimed at supporting Palestinian factions with weapons and money.

“We don't need weapons from Iran. We are taking political steps aimed at restoring our rights from Israel, and we hope that everyone will support us in this endeavor," Abdullah Abdullah, a member of the Fatah Revolutionary Council in Ramallah, told Al-Monitor.

“If Iran is sincere in its support for the Palestinians, then it must deliver such support through the PA,” Abdullah said, referring to the funds Iran recently provided to hundreds of families of Palestinians killed in resistance activities in Gaza, after the PA stopped paying their salaries in February.

The complicated process of arms smuggling to the West Bank has led to the growth of locally manufactured weapons. In early June, Israel announced it had seized 270 locally made weapons in the West Bank so far this year, compared with 400 in all of 2018.

The price of locally manufactured weapons in the West Bank has increased significantly. Observers attributed this to the Israeli security campaigns aimed at confiscating the weapons and Iran's statements that it intends to arm the Palestinian factions in the West Bank. The price of an M16 rifle has risen to about 60,000 shekels ($16,000) or more, while the locally produced Carl Gustaf rifles currently sell for between 3,000 and 4,000 shekels ($830 and $1,100), compared with 2,000 shekels ($550) in previous years.

Some arms dealers and manufacturers believe that since Iran has failed to smuggle weapons through the border with Jordan, it will help finance weapons-making in the West Bank by purchasing the locally made arms. Hamas military expert Rami Abu Zubaydah told Al-Monitor that is indeed the case.

Military expert and retired PLO Gen. Yusuf al-Sharqawi told Al-Monitor Iran has strong intelligence apparatuses and allied groups in the region and will continue its efforts to arm the West Bank, despite ongoing security operations launched by the PA and Israel aimed at weakening the factions’ organizational structure.