Some Palestinians up in arms over weapons proliferation

The Palestinian Authority is being criticized for failing to end the spread of weapons among citizens in the West Bank, where family disputes often end tragically. 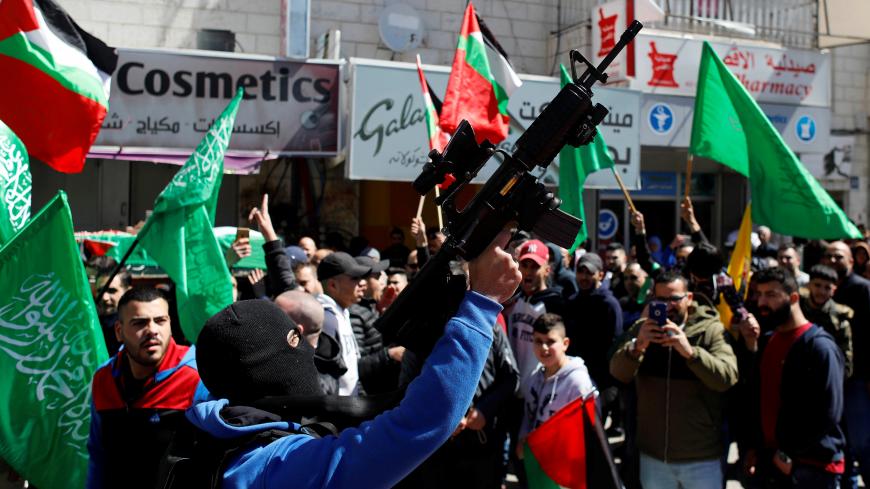 Palestinians have been plagued in recent weeks by a series of shootings in the West Bank — a clear sign of weapons proliferation.

Armed clashes among families and tribes were to blame for many shootings in May, including six in Nablus and one each in Sebastia and Salem, all on May 19; one incident in Hebron between two families in mid-May lasted several days. On May 22, armed family violence broke out in al-Eizariya and in al-Fara refugee camp. Authorities also have been targeted.

Given what he says is a weak Palestinian judiciary, Palestinian police Spokesman Louay Zreikat told Al-Watan Radio on May 27 that security services seize 600 to 1,000 weapons annually in the West Bank as they focus on smuggled weapons used in family disputes and for intimidation.

Zreikat said Israel turns a blind eye to some smuggling and actually facilitates the entry of some weapons to the Palestinian territories as long as the weapons don't appear to be for military use.

The number of slayings in the West Bank involving weapons appears to have increased significantly so far this year compared with the past four years. Since January, the Independent Commission for Human Rights in Ramallah has reported numerous West Bank deaths either under mysterious circumstances or as a result of family quarrels and misuse of arms. Four deaths occurred in May, four in April, 12 in March, nine in February and seven in January for a total of 36.

A security official told Al-Monitor on condition of anonymity, “Smuggling weapons in the West Bank is one of the Palestinian leadership’s main concerns for several reasons. First, Israel contributes to their entry. Second, talks are increasing about the Palestinian Authority (PA)’s potential collapse due to its financial crisis. Third, [there are] fears of such claims being exploited by other Palestinian forces to destabilize the PA and take over the West Bank. All weapons that don't belong to the security services are illegal, whether they are owned by Palestinian factions, families or outlaws.”

Hani al-Masri, head of the Palestinian Center for Policy Research and Strategic Studies – Masarat, voiced a similar opinion about which weapons Israel pays attention to.

“There are two types of weapons in the West Bank. The first is being used by the resistance, which Israel and the PA are in the process of controlling; the second is the random type used for intimidation and in family disputes, which Israel allows," Masri said.

"Some weapons are also owned by opponents and supporters of 83-year-old Palestinian President Mahmoud Abbas in anticipation of his succession, since they fear internal conflict after he is no longer president. Some Palestinian officials financially benefit from the sale of these weapons, and some even provide cover for those who carry them [so they aren't] pursued by the security services," Masri added.

Abbas has talked of resigning in the past, and now — given his age, the financial crisis and calls from many quarters for him to step down — that possibility has become more likely.

Al-Monitor learned from close associates of Abbas that leaders of his Fatah party asked him in April to take action to solve the West Bank's security problems. They explained that people are afraid, as shootings are occurring frequently and feuding families are blocking streets with burning tires. According to the sources, some PA officials are even settling accounts in broad daylight.

Hassan Khreisha, former speaker of the now-defunct Palestinian Legislative Council, told Al-Monitor, “The proliferation of weapons in the West Bank is a result of internal trade between PA officials and arms traffickers who smuggle them from Jordan and Israel. The [problem] is linked to internal issues and preparations for the president's succession. … The PA is mainly concerned with the resistance’s weapons and takes action to confiscate only" those that Hamas uses against Israel.

The most recent weapons roundup came in February in Nablus and proves the PA is willing and able to confiscate weapons — just not those used by private citizens who commit violence.

“The PA is constantly cracking down on young men affiliated with Hamas and other factions in the West Bank, arresting and interrogating them. … Meanwhile, thugs and criminals flaunt their weapons in broad daylight. This is unfair," Fathi al-Qarawi, a Hamas leader in the West Bank, told Al-Monitor.

He added, “The West Bank is facing serious issues with weapons and security chaos, and we are well-aware that parties within the security forces are arming up for the post-Abbas phase.”

The PA has yet to appoint a deputy head as a potential replacement for Abbas, though many Palestinian leaders would like to take over the position. The names of several prominent Fatah officials are being circulated, including Fatah Central Committee Secretary Jibril Rajoub; security chief Maj. Gen. Majid Faraj, who is close to Abbas; and Abbas rival Mohammed Dahlan. Also on the list is Saed Erekar, a member of the PLO’s Executive Committee, and Fatah Deputy Chairman Mahmoud al-Aloul. These potential candidates have been preparing for the next phase by mobilizing those loyal to them and providing them with money and weapons in anticipation of a potential conflict over succession.

Conflict among several PA currents led to the proliferation of weapons in 2016 and subsequent territorial divisions and clashes between several cities and camps in the West Bank. An arms dealer there using the pseudonym Abu Ali told Al-Monitor, “The PA knows the source of weapons in the West Bank, especially in Nablus and Jenin. Many dealers are Palestinian officers who sell a piece and confiscate it an hour later. Prices are increasing: For instance, an M16 rifle sells for $20,000, a Kalashnikov for $11,000 and a handgun for $10,000.”

Community violence is growing, and local rival leaders are emerging at the PA’s expense. Some observers say Israel encourages this violence. Some Palestinians now believe they can solve their personal disputes and enforce the law themselves using guns. Meanwhile, the PA and its security services show weakness in controlling weapons and citizens are no longer confident the PA can handle the problem.