Faced with an alarming arms proliferation, Palestinian President Mahmoud Abbas has instructed his security forces to strike with an "iron fist" to prevent further bloodshed that could plunge the West Bank into complete security chaos. 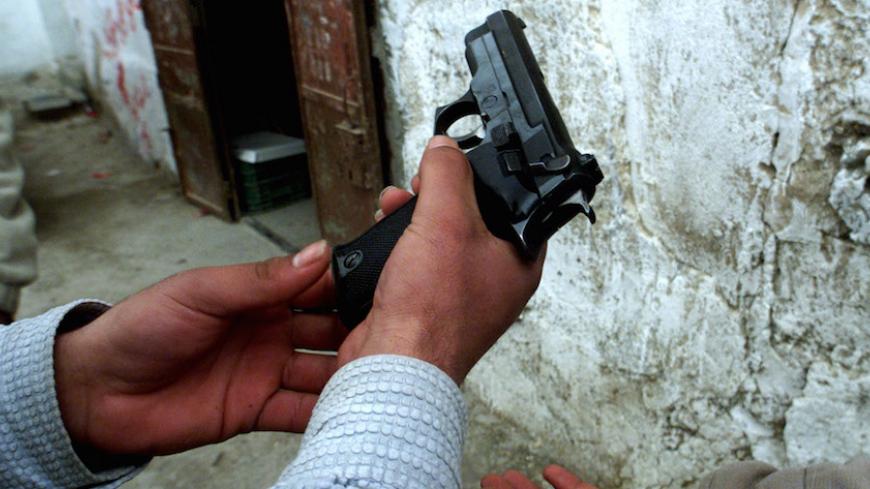 RAMALLAH, West Bank — The West Bank suffered through a bloody week, with six deaths in a few days. On June 29, three people were killed and 13 wounded in a shooting in Yaabad in Jenin province in the northern West Bank over a family dispute. On that same day, fugitives in Nablus shot two police officers dead, while the sixth victim was killed during another family quarrel in the Shuafat refugee camp on July 1.

Dozens of the quarrels that have taken place in the cities, villages and camps of the West Bank were characterized by the use of weapons by civilians. Fired on celebrations or during family quarrels, intermittent gunshots are heard almost every night in the West Bank, raising concerns about lawlessness amid the security forces’ inability to confiscate arms.

The governor of Nablus, Maj. Gen. Akram Rajoub, told Al-Monitor, “Arms proliferation has become an alarming phenomenon driven mainly by the Palestinian security’s failure to deal with it effectively. Also, morals and values have changed, making it easier to settle conflicts and violate the law using arms.”

He added, “Should our armed forces fail to solve the problem and strike all those who use arms with an iron fist, this phenomenon is likely to expand further.”

Security official Maj. Gen. Adnan al-Damiri told Al-Monitor, “Israel controls the borders, which makes it the main source of arms in the West Bank through arms dealers, since Palestinian security forces are absent in some areas, mainly Area C, which is under Israel’s control, where arm dealers can find a hideout.”

By using arms to settle conflicts, Palestinians show a lack of trust in official authorities. Writer and political analyst Jihad Harb addressed this issue in an interview with Al-Monitor, saying, “The population’s resorting to weapons reveals a mistrust in authorities amid the absence of security and stability in Areas A, B and C. Such a situation puts the Palestinian Authority and its security forces at stake, testing their abilities in terms of ensuring the people’s security and intervening fast to settle conflicts.”

Consequently, the Palestinian government now shares the people’s concerns about arms proliferation. On the evening of July 1, President Mahmoud Abbas convened a meeting of security leaders to discuss the issue at the PA headquarters in Ramallah. Abbas issued instructions that stressed “the need for preserving security and stability according to the law in all areas and striking with an iron fist anybody who breaks the law and sheds Palestinian blood to fuel chaos, regardless of this person’s background.”

Rajoub explained, “The president and the leadership issued instructions to address the problem of arms proliferation. According to these new instructions, anyone who uses illegal arms or carries them in public should be dealt with immediately. Moreover, anyone who fires at civilians or security forces will be shot as well. Officials are alarmed by the situation, and the new instructions are firm and will be implemented.”

Damiri said, “The Palestinian security apparatus is keen to curb this phenomenon despite the gaps, as no security apparatus in the world is capable of completely stopping shooting incidents. Security forces have recently confiscated dozens of weapons in the northern West Bank.”

The security services in Jenin are also preparing for a wide security crackdown campaign in the upcoming days to track down those causing chaos and insecurity and to collect weapons.

The Palestinian people’s concerns about the use of arms to settle family conflicts are intensified by the political system’s instability, as observed in its failure to set a date for presidential and legislative elections, disagreement on Abbas’ successor and the ongoing division.

Hassan Khreisheh, a member of the Palestinian Legislative Council, holds the PA responsible for the proliferation of arms. Khreisheh told Al-Monitor, “The security forces were not serious about dealing with this problem. Gunshots are fired in the air on a daily basis in all the cities, but security officials have been cautious about confiscating arms. Some of them fear losing their positions because these arms belong to certain strongmen who may resort to violence to solve internal disagreements, prove their strength or intimidate their opponents.” He added, “I don’t think the PA is inadequate. It is rather unwilling to deal with this issue, because the arms in question could be used in future national conflicts.”

Khreisheh argued, “Those who buy and collect arms should understand that this isn’t the right way to settle any future political conflicts. Palestinians are now well aware that the legitimacy of any official can only be asserted through the ballots and not by the use of arms.”

Harb pointed to several problems hindering efforts to rein in this phenomenon. Among them are the PA’s lack of a strong policy and weak laws. Therefore, the PA is facing a serious test and must make a difficult choice: It can either continue to allow the proliferation of arms, which will lead to chaos, or it can impose its power.

Harb said, “Palestinians are right to be concerned that organized armed groups may eventually seize power or drag us into security chaos. This is why the issue of arms proliferation should be brought to an end by adopting laws to govern Palestinian politics and domestic affairs. Otherwise, the country will be dragged into hell.”

According to many officials and observers, facing the arms proliferation phenomenon in the West Bank requires the armed forces not only to take a strong stand, but also to adopt an impartial approach toward everyone. New legislation should also be enacted to legally deter the use of arms. Failure to do so will keep the door open for this phenomenon to drag society into a lawless state that will jeopardize the people’s security and stability and undermine the PA along with its institutions and security bodies.