The Palestinian security services increased their operations against arms and drug traffickers in the West Bank in light of the high level of armed crimes and killings. 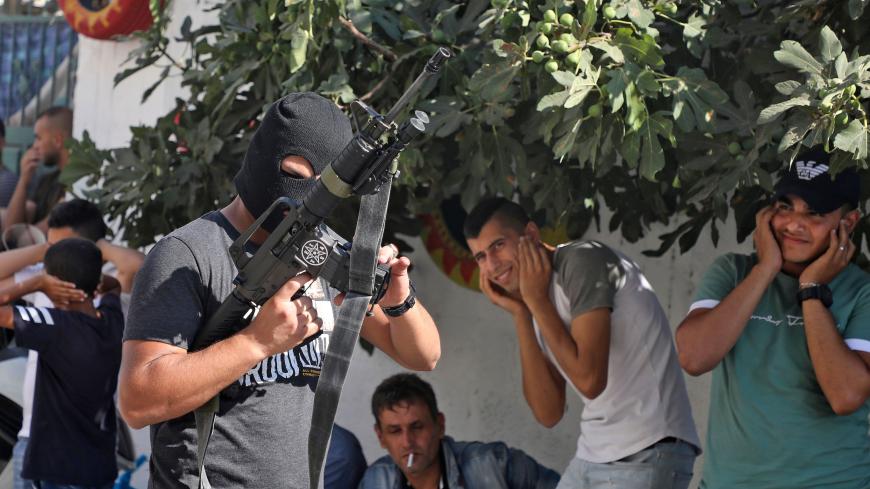 Palestinians cover their ears as a masked man fires a volley from his rifle during the funeral of Dalia Ahmed Suleiman Samudi, 23, in Jenin city in the occupied West Bank on Aug. 7, 2020, who was killed by Israeli fire during clashes. - JAAFAR ASHTIYEH/AFP via Getty Images

RAMALLAH, West Bank — Palestinian security services intensified in early September their security operations in the West Bank in pursuit of arms and drug traffickers and individuals who have used arms during family quarrels.

These security operations, which include raids, incursions and ambushes, come in response to the presidential decree issued by President Mahmoud Abbas on Sept. 1 amending the Firearms and Ammunition Law No. 2 of 1998, to increase prison terms and financial fines imposed on crimes related to the possession, use, trafficking in, manufacturing and smuggling of firearms in violation of the law.

Louay Arziqat, a spokesman for the Palestinian police, told Al-Monitor that Abbas and Prime Minister Mohammad Shtayyeh have issued clear instructions to the security establishment to pursue arms dealers and perpetrators of crimes.

He added that the security services have begun to tighten measures, and in the coming days strict measures will be adopted to control weapons and arrest traffickers and users.

The security services, according to Arziqat, rely on their intelligence operations for information on the movement of arms and drug dealers amid ambushes set up for the involved individuals.

These services also rely on security personnel and officers depending on their competence, and most importantly they also rely on cooperation with citizens who do not hesitate to report the movements of arms and drug traffickers.

The phenomenon of the proliferation of weapons and the resulting chaos is causing concerns for the Palestinian Authority (PA). This phenomenon has expanded with the ongoing stifling political and economic crisis the PA is going through amid concerns that some parties such as Israel might exploit the situation to cause chaos in the Palestinian territories. This phenomenon also bodes ill as it portrays a negative state of chaos that might prevail in the West Bank in the event of the PA's collapse. Also, its continuation affects the prestige and position of the PA, hence the latter’s security operations to impose its prestige.

Since the beginning of this year, the West Bank witnessed a significant 42% increase in murder crimes compared to last year, according to Arziqat.

In this context, he said, “Since the beginning of the year we have had 37 killing cases, most of which were with weapons, so it was necessary to intensify security work to pursue this phenomenon,” adding that most of the perpetrators are young people aged between 18 and 30 years.

Amid all the security operations carried out by the security services, these operations remain incomplete, especially considering their inability to play any role in the lands classified as Area C as per the Oslo Accord. These lands account for 60% of the West Bank and are completely subject to Israeli security and administrative control.

On Sept. 18, the southern area in Hebron turned into a war zone following a quarrel that broke out between families and degenerated into armed clashes during which firearms, some of which were machine guns, were used, and several homes and vehicles were set ablaze. The clashes resulted in several injuries and ended after the intervention of influential tribal figures in the area.

On Sept. 17, a young man and two girls were killed in the Wadi al-Nar area, northeast of Bethlehem while they were in their vehicle. They were shot by four armed people who stopped the vehicle and opened fire on it due to family disputes.

Arziqat said the challenge facing the security operations lies in the “areas where the security services are not deployed and cannot enter and areas considered as a starting point for smuggling weapons to other areas.”

He said, “A few days ago, the southern area of ​​Hebron turned into a battlefield knowing that we are prevented from entering it. Although the area is located under the control of the Israeli army and is only meters away from the settlers, the army did not lift a finger, just like when three citizens were killed in Wadi al-Nar,” which is located near an Israeli military checkpoint in Area C.

Arziqat said Israel is turning a blind eye to arms smuggling to the West Bank through merchants from Israel who bring such arms into Area C and distribute them to several areas. This indicates the presence of hidden hands tampering with security and spreading instability, he said.

The presidential decree amending the Firearms and Ammunition Act was preceded by a movement by human rights and official institutions to address the phenomenon.

In this context, the Independent Commission for Human Rights held a meeting Aug. 18 attended by the Public Prosecution, the Military Judicial Authority, the Ministry of Interior, the Ramallah and al-Bireh governorate, the police, the Preventive Security Service and human rights institutions.

The participants highlighted “the need for a political will in order to prosecute those who illegally possess, trade or use weapons, regardless of their status and position, as well as the security personnel who use weapons for personal reasons.”

For his part, Jenin Gov. Akram Rajoub told Al-Monitor the new security measures to pursue arms and drug dealers are a better start than previous measures. “If there is a strict implementation of the instructions issued by the political leadership, then we are on the right path to get rid of the phenomenon.”

Rajoub added, “Security policies need to be strictly implemented, negative phenomena prosecuted so that citizens feel the authorities are working to protect them and are capable of establishing security.”

“This requires sustainable and continuous security work and not just sporadic episodes when we feel that Palestinian citizens are in danger,” he continued.

The Palestinian security services might sometimes manage to arrest some arms or drug dealers, but there are many reasons that will prevent them from eradicating this phenomenon. Chief among these is the widespread proliferation of weapons among citizens, families and clans. This infers that they could enter into disputes with them if they try to seize weapons by force. Add to this the inability to enter many areas in the West Bank in which the arms trade is promoted. More importantly, such services do not control the contact points between the West Bank and the 1948 lands through which most of the arms and drug smuggling operations take place.