The Palestinian Authority has ratified draft legislation on firearms and ammunition licensing fees in a bid to create a monopoly on arms in the West Bank. 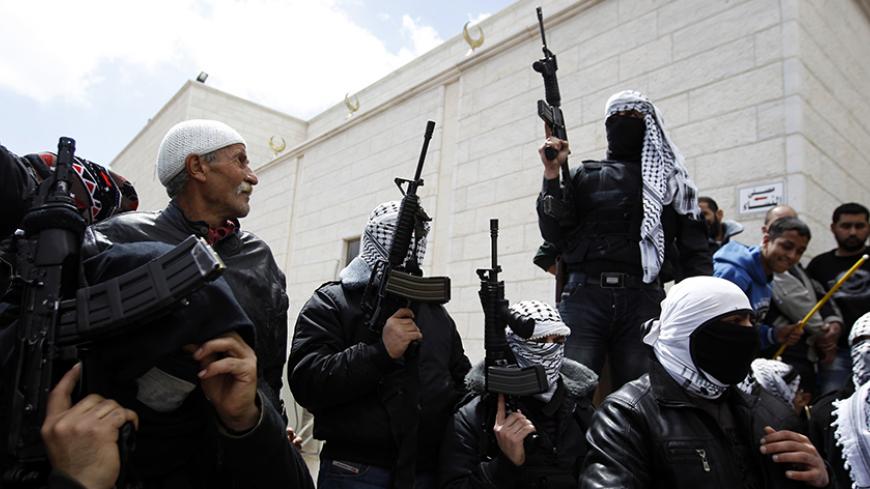 RAMALLAH, West Bank — Palestinian parties are currently discussing the implemention of a draft law on firearms and ammunition licensing fees that the Palestinian Authority Cabinet ratified Dec. 13. A government statement declared that the law aims to “reorganize the weapons dossier, reduce the spread of illegal weapons, work to control illegal weapons and confront arms dealers and outlaws seeking to undermine the security of both the homeland and the citizen.”

The 1998 law was never, however, implemented because the PA remained weak and unable to regulate arms or move to control their proliferation. It has also sought to avoid sparking internal clashes by going after weapons, as many of those who have them are wanted by Israel.

Article 28 of Law No. 2 stipulates, “The license to possess or trade in firearms or ammunition is granted based on a system determined by the minister of interior and approved by the Council of Ministers.” Article 6 sets the conditions to get a license: “Proof that the arms are purchased from a licensed trader, a certificate of sale containing a description of the weapons sold and the date of sale as well as the name and address of the seller, proof of purchase of a firearm from a licensed person, proof of firearm import from abroad and an import permit.”

Most Palestinian gun owners do not meet those conditions, because their weapons were illegally smuggled by arms dealers from Israel and elsewhere. Some weapons, including the Carlo, are manufactured in weapon mills in the West Bank. The Carlo gained notoriety from its use in attacks in Israel. An official source in the Palestinian government told Al-Monitor on condition of anonymity, “The Interior Ministry, in cooperation with the relevant authorities, will prepare a procedural guide in a bid to regulate and clarify weapons licensing procedures and financial fees.”

Mohamed Mansour, the undersecretary of the Interior Ministry, told Al-Monitor that the government’s ratification of the firearms licensing regulation will help the security forces impose law and order and establish security in Area A, which is under full PA control, as they will be able to track the number and types of weapons and their owners. The security apparatus will then be able to enforce the law, confiscating unlicensed weapons and punishing those in possession of them.

Mansour also noted that the law will help the security forces investigate crimes committed with unlicensed weapons and minimize the use of firearms in disputes and social events. Once the guide is ready, Mansour said, any citizen of Area A in possession of a weapon can go to the police to license it and pay the appropriate fees. He added, “The government does not want to open the door to the arms trade and wants to control their proliferation to establish security.”

There are no licensed gun shops in the West Bank, but weapons can be sold and purchased legally. Traders register the weapons and can obtain a permit from the Palestinian police.

Israel occasionally undertakes campaigns against illegal weapon mills. The most recent such operation, on Dec. 19, uncovered the largest weapons factory in Hebron. The proliferation of arms is a major challenge to the PA security services. On Aug. 21, 2016, clashes broke out between the security forces and armed individuals in Nablus, resulting in the deaths of two security officers. The security services conducted a series of raids after the episode, arresting a number of individuals and seizing weapons and ammunition.

“The security crackdowns in the West Bank will continue in order to control arms, prosecute outlaws and enforce the law,” Adnan al-Damiri, a spokesman for the Palestinian security services, told Al-Monitor. “We do not have a formal market for licensed weapons. Such a market requires legal stores that sell weapons and ammunition and a PA-licensed source to import weapons. All the weapons found in the hands of citizens come from unknown sources and entered the Palestinian territories illegally.”

Damiri added, “We in the security forces have received a political order whereby the only weapons in Palestine are the PA’s, and any other weapons should be in line with the law.”

Although the government's goal is to control and limit the spread of arms in the Palestinian territories, the new law is not expected to meet its goal due as smuggling operations continue. In addition, knowing that they might be prosecuted if denied a license, many Palestinians who already have weapons are unlike to apply for one.