Amid the uncontrollable proliferation of weapons in the Gaza Strip, human rights centers and institutions sounded the alarm, while Hamas seems unable to prevent citizens from obtaining arms. 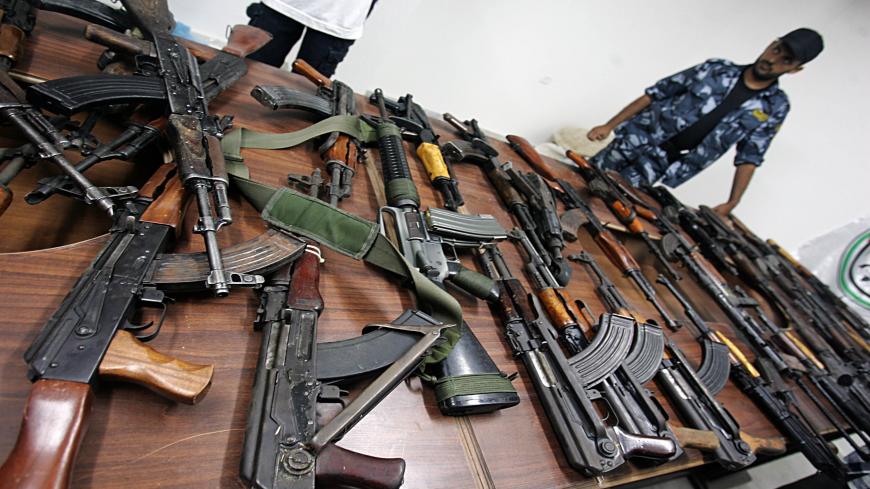 GAZA CITY, Gaza Strip — In light of the ongoing proliferation of unauthorized weapons in Palestinian homes in the Gaza Strip, human rights centers and institutions sounded the alarm following the escalation of violence and distruption of civil peace.

Meanwhile, the Hamas movement that rules Gaza seems unable to control the spread of weapons among civilians.

In late September, firearms and white weapons were used in several family feuds that erupted in various governorates in the Gaza Strip. These resulted in casualties among citizens, especially among women and children. Most recently, on Sept. 27, during a family quarrel in the city of Nuseirat, in central Gaza, five people were stabbed with knives.

In a statement issued Sept. 26, Al-Mezan Center for Human Rights listed several family fights where firearms were used, most notably a quarrel that occurred between two families in Shajaiya neighborhood in eastern Gaza City, on the evening of Sept. 25. “As a result, four persons sustained injuries, one of whom is in serious condition,” the statement read.

Another armed dispute flared up between members of the Barbakh and Shurrab families in Khan Yunis, in the south of Gaza, on the evening of Sept. 22. Three civilians, including two children, were injured. While trying to disperse the quarrel, five policemen were also injured, while one of them remains in critical condition, Palestinian police spokesman Ayman al-Batnaiji said in a Sept. 23 statement.

He explained that the police imposed law and order at the site of the incident, arrested the perpetrators and the shooters, and confiscated the weapons used.

On Sept. 20, a family feud broke out at the Nuseirat camp in the central Gaza Strip. Firearms were used in the feud and resulted in the injury of a 29-year-old woman due to a live bullet in her thigh.

In its Sept. 26 statement, Al-Mezan Center said, “Multiple similar incidents involving the use of firearms and white arms were recorded in the last few days, leaving a number of people wounded and resulting in damage to private properties.”

The center called on “the relevant authorities to uphold the rule of law and prevent parties to a dispute from taking the law into their own hands. The authorities must launch a prompt, comprehensive and credible investigation into the tragic events and hold perpetrators to account through a sound legal process.”

Meanwhile, the Palestinian Center for Human Rights in a Sept. 26 statement expressed its concern about the increasing societal violence and the use of weapons in family and personal quarrels, which threatens civil and societal peace. It urged the competent authorities to prosecute perpetrators and bring them to trial, and to take more stringent measures to confront the increasing use of weapons outside the rule of law.

In statements to Al-Monitor, Gaza's Interior Ministry spokesman Iyad al-Bozm warned against the proliferation of weapons in Palestinian society. “This is a result of the Palestinian-Israeli conflict and the youth’s affiliation with the Palestinian resistance factions fighting Israel. But these are unjustified reasons.”

He expressed his concerns over the use of arms in family quarrels. “The ministry deals firmly with the use of weapons and shooting during family feuds. Shooters and weapons users are arrested, and their firearms are confiscated.”

Bozm noted that his ministry imposed security stability in all areas where family quarrels erupted. “It is working with the help of tribal mediators and dignitaries to contain these quarrels and prevent their spread, to achieve civil peace and maintain security and order.”

In addition to the spread of the resistance’s weapons in Palestinian society, other weapons reached the Gaza Strip through border tunnels dug between Egypt and Gaza, which the Egyptian army destroyed in 2014. Some of these tunnels were used by the families that owned them to import and smuggle unlicensed weapons from Egypt to the besieged enclave and sell them to citizens for personal protection purposes.

What’s more, social media is being used as a marketplace to promote the sale of unlicensed weapons. Weapons are sold on Facebook accounts, without any supervision by the official authorities in the Gaza Strip. “Gaza Arms Market” Facebook page, for example, has more than 1,100 followers. It posts brochures with weapons and ammunition for sale, such as pistols, machine guns and even grenades.

The Palestinian Firearms and Ammunition Law No. 2 of 1998 prohibits the possession, acquisition and carrying of firearms or parts thereof or bullets without a license from the Ministry of Interior. It imposes prison sentences of three months to three years, with penalties ranging from 5,000 to 7,000 Jordanian dinars ($7,000 to $9,800).

However, Salah Abdel-Ati, director of the International Commission to Support the Palestinian Rights, told Al-Monitor, “This law is not applied in the Gaza Strip. Even in cases where the shooters are arrested, they are released when the family dispute is resolved through tribal mediation.”

He added, “The resistance weapon widespread in Palestinian society comes from the need to confront any possible Israeli military aggression against Gaza. These weapons should not be used at all in any of the internal conflicts. This shakes the pillars of civil peace. Factions must control these weapons and prevent their indiscriminate use.”

Abdel-Ati said this requires the security services to fulfill their duties to curb the proliferation of weapons among citizens, and to enforce the Palestinian law and its penalties.