A state of insecurity has become widespread in the West Bank, raising fears among Palestinians of the uncertain future that awaits them. 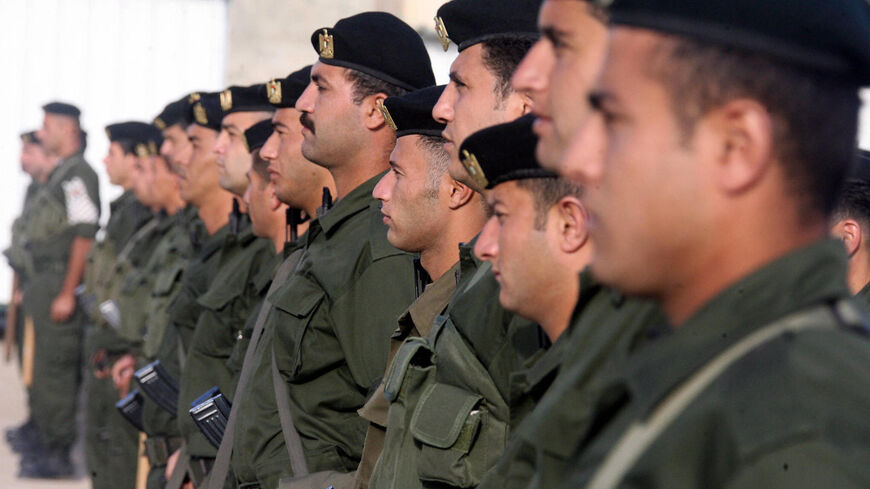 Members of the Palestinian security services stand at attention during a drill before deployment in the flashpoint West Bank city of Nablus, Nov. 4, 2007. More than 300 extra Palestinian police have been deployed in the key West Bank troublespot of Nablus under a Palestinian Authority plan to restore law and order to the territory. - JAAFAR ASHTIYEH/AFP via Getty Images

RAMALLAH, West Bank — The July 22 assassination attempt of Nasser al-Din al-Shaer, a former deputy prime minister who is close to Hamas, near the West Bank city of Nablus was another example of the state of unruliness plaguing the West Bank.

Many Palestinians fear that this disorder could soon spur acts of reprisal as part of settling political and personal scores amid the decline of the state's presence and prestige.

The failed assassination attempt took place in the town of Kafr Qelil near Nablus. Unknown gunmen shot at Shaer’s vehicle; he received six bullets in his feet and remains under treatment.

The incident was condemned by the highest level of the Palestinian Authority (PA), starting with Palestinian President Mahmoud Abbas and Prime Minister Mohammad Shtayyeh, both of whom pledged to put an end to cases of lawlessness.

Security in the West Bank is tumultuous.

On June 20, gunmen opened fire on the Hijab family in the town of Zawata near Nablus, injuring a father and his son, both of whom were admitted to intensive care. Details of the case have not been revealed.

These two incidents embarrassed the PA and its security services, especially since there have been reports that the suspects in the assassination attempts are members of the security forces.

In a July 26 statement to the Palestinian official WAFA news agency, Maj. Gen. Talal Dweikat, spokesman for the Palestinian security services, said that they arrested suspects in the two incidents and investigations were underway to complete the necessary legal procedure to achieve justice within a legal framework.

Dweikat also stressed that the security apparatus continues to endeavor to track down outlaws and offenders who committed attacks on citizens, according to Abbas’ directives.

“Everyone is equal before the law. The security forces will make every effort to end the state of chaos and disorder and to protect Palestinians in order to achieve justice and uphold the law,” he added.

On July 16, gunmen opened fire on several women’s beauty salons in the city of Nablus. No injuries were reported.

The city of Qalqilya in the northern West Bank is also experiencing security issues. Violent popular protests broke out in the wake of the disappearance of Qusai Abu Amer, 19, on July 25. There have been speculations tying some politicians to the disappearance of the young man.

On July 30, several West Bank cities and villages witnessed indiscriminate shooting in the air and widespread use of weapons in celebration of high school final exams results, causing clashes between families and injuring dozens of civilians.

In June, the Independent Commission for Human Rights monitored 14 unnatural deaths (nine in the West Bank and five in the Gaza Strip), mostly as a result of family quarrels and use of weapons.

Col. Louay Arziqat, a spokesman for the Palestinian police, told Al-Monitor that the police and security forces are working to limit the state of insecurity and arrest those responsible for it.

“The main challenge is that the incidents are mainly occurring in West Bank areas classified as C where we cannot operate as they fall under the Israeli forces' jurisdiction. These areas have become a safe haven for outlaws,” he said.

Arziqat added that weapons and ammunitions are confiscated and suspects are arrested in the areas in which the Palestinian security forces operate.

“But these outlaws are taking advantage of the Israeli army’s incursions into Palestinian areas to spread chaos, with the police being busy countering Israeli break-ins,” he said.

The state of widespread insecurity raised concerns among Palestinians who fear that this is a prelude to the political chaos that could befall the West Bank, notably as a result of the political vacuum that could arise after Abbas’ departure from power.

The failed assassination attempt against Shaer brought to mind the state of security chaos in the aftermath of the assassination of opposition figure Nizar Banat in June 2021 and the shootings of politicians such as Khader Adnan and Abdel al-Sattar Qassem.

Palestinians feel like they are now scrambling to provide their own security and protection for their families, as they feel they are no longer safe.

On July 28, national and popular movements and figures launched what they called the “national rescue call” against the state of insecurity — a petition that was signed by some 600 activists calling on the PA at all political and security levels to intervene immediately to arrest suspects in the shootings on Shaer and the Hijab family, and the need to hold comprehensive elections to elect new leadership.

Writer and political analyst Jihad Harb told Al-Monitor, “This state of insecurity in the West Bank is reflective of the PA’s weakness and the deterioration of the financial crisis. This is not to mention the protests of many unions and the PA’s mismanagement of the crisis, causing its popularity to decline in recent years.”

He explained that the PA’s weak position and the collapse of social values led to the widespread use of weapons among citizens in resolving disputes breaking out in the streets.

“The absence of power contributed to the rise of clans. But I don’t believe that what is happening now is a prelude to the departure of Abbas, as many Palestinians have been claiming,” Harb said.

“I think people are just afraid from the lack of a political vision to address the domestic situation and the accumulation of problems, with no horizon and fears of what might happen after Abbas, which drive many people to predict the worst,” he added.