Islamic Jihad leader in the West Bank Khader Adnan was subjected to an assassination attempt in Nablus, raising speculation about the possible role of the Palestinian Authority’s security forces. 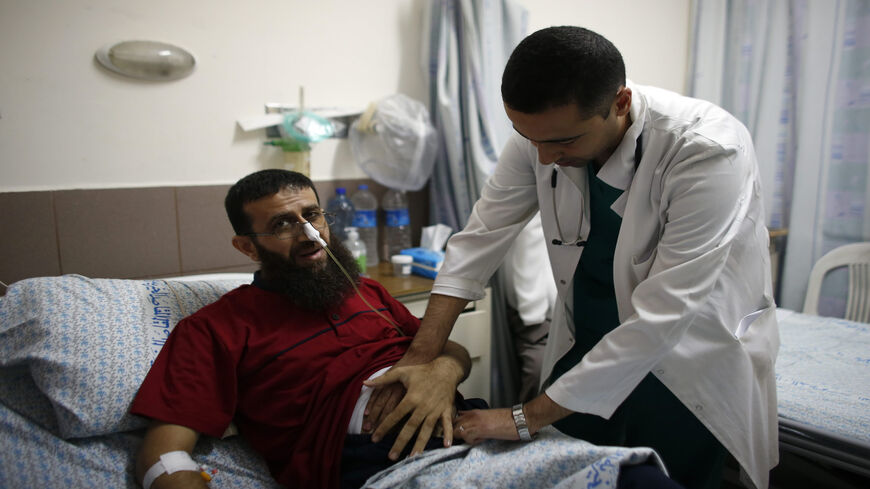 Palestinian Khader Adnan, who staged a 56-day hunger strike while being detained for a year without charge by Israeli authorities and who Israel says is a member of Islamic Jihad, lies on a bed as he is treated at the Makassed hospital in East Jerusalem, July 15, 2015. - Ahmad Gharabli/AFP via Getty Images

GAZA CITY, Gaza Strip — Leader of Islamic Jihad in the West Bank Khader Adnan survived an assassination attempt Feb. 26 after armed men shot him in the city of Nablus in the northern West Bank.

Adnan, who hails from the city of Jenin in the northern West Bank, is the most prominent Islamic Jihad leader in the West Bank.

He has been arrested by Israeli forces eight times and is considered an icon for the Palestinian prisoners in Israeli prisons. Both local and regional media dubbed him the wager of the “battle of empty stomachs,” as he was the first Palestinian prisoner to carry out an individual hunger strike in 2012 in rejection of his administrative detention, a practice that allows Israel to detain Palestinians without charge.

On the political level, the assassination attempt against Adnan received wide reactions, as most Palestinian factions — with the exception of Fatah — issued statements condemning the incident.

Also, Islamic Jihad held a political meeting in Gaza City Feb. 27, in which it held the Palestinian Authority (PA) responsible for Adnan’s life, and called for an investigation into the incident and for holding the perpetrators to account.

Adnan told Al-Monitor, “A masked gunman parked his vehicle next to me while I was on a street in the city of Nablus. He shot me in the head and fled.”

Although Adnan is one of the most prominent advocates of resistance to Israel, he accused security forces affiliated with the PA for his assassination attempt.

“The Israeli occupation is my only opponent, but those who shot me were not Israeli parties but Palestinian security members serving Israel,” he noted.

He explained that such members had previously attacked and assaulted him during a visit to Nablus because of his opposition to the PA policies.

Following the assassination attempt against Adnan, a masked gunman belonging to the Fatah movement led by PA President Mahmoud Abbas, with a number of his peers behind him, read a press statement Feb. 26 attacking Adnan. The gunman said that Adnan was not welcome to visit Nablus as he was a source of sedition, but gave no further details.

Adnan had been arrested by the PA security services during his participation in a sit-in in Ramallah on Aug. 22, 2021, demanding the release of political detainees languishing in the PA prisons.

Khader Habib, another Islamic Jihad leader, told Al-Monitor, “The attempt to assassinate Adnan is a full-fledged crime, not an isolated incident. It is related to previous incidents during which PA opponents were killed with the aim of suppressing those opposing the PA policies, the last of whom was Nizar Banat.”

Banat, a political opposition figure, had repeatedly criticized the PA policies in managing governance and the conflict with Israel. He died shortly after his arrest by the PA security forces after he was beaten and tortured on June 24, 2021, in Hebron in the southern West Bank.

Habib pointed out that there is a “security system in the West Bank” that aims to neutralize popular and factional symbols and prevent them from escalating the resistance against Israel in the West Bank.

He added that the attempt to eliminate Adnan from the Palestinian arena — through arrest or assassination — “only serves the Israeli occupation.”

Talal Dwaikat, spokesperson for the PA security services in the West Bank, dismissed in an interview with Al-Monitor all accusations whereby members of the PA security forces were behind the assassination attempt against Adnan.

“What happened is the result of a personal dispute between Adnan and gunmen in Nablus, and the security services have nothing to do with it,” Dwaikat said.

He indicated that the security services are following up on and investigating the incident and have yet to draw conclusions.

Asked about the role of the security services in combating the spread of unofficial weapons in the West Bank, he said, “We cannot control these weapons as long as the Israeli forces continue to storm our Palestinian cities and villages.”

He told Al-Monitor, “The PA provides the appropriate environment for assassinations and the liquidation of opponents or national symbols.”

He stressed the need to create a popular and factional favorable environment “to protect national symbols from liquidation attempts.”

Mustafa al-Sawaf, political analyst and former editor-in-chief of the local Felesteen newspaper close to Hamas, told Al-Monitor that the attempt to assassinate Adnan “shows that the PA approach will not change as far as the liquidation of opponents is concerned.”

Sawaf explained that Adnan is the most prominent opponent and instigator against the security coordination between the PA and Israel.

He said, “The popular saying, ‘For those who know no punishment will misbehave’ applies to the PA. In other words, as long as the international community continues to remain silent on the PA practices against its opponents, chaos and violence will continue to be the name of the game in the West Bank.”

Sawaf noted that failure to address this phenomenon will create internal clashes between the Palestinian factions in the West Bank, which would benefit Israel.

Hassan Abdo, political analyst close to Islamic Jihad, told Al-Monitor, “The PA security forces’ targeting of Adnan — first by arresting him and then by attempting to assassinate him — may encourage Israel to carry out an assassination and liquidation operation shortly.”

He said, “Should Israel do so through its army’s Mistaarvim unit, it will be difficult to prove that the PA is not involved in this, and this will establish a developing conflict not only between Islamic Jihad and the PA, but also between all the resistance factions and the PA, and this could reach the point of mutual assassinations.”