The story of Khader Adnan, who was arrested twice by Israel and recently released, garnered public sympathy in Palestine and throughout the world. 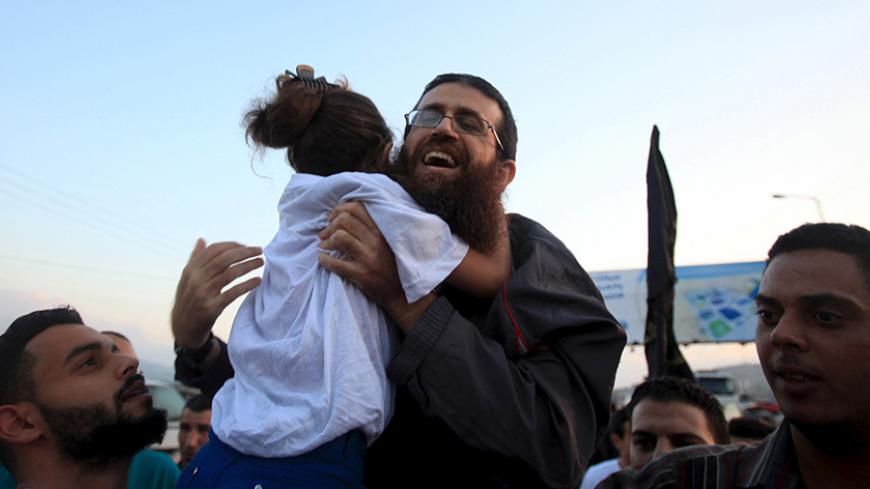 Palestinian Islamic Jihad leader Khader Adnan is hugged by his daughter in the West Bank village of Arraba near Jenin, July 12, 2015. - REUTERS

JENIN, West Bank — Cries of joy were heard at the home of administrative detainee Sheikh Khader Adnan after he was released and carried on the shoulders of supporters into his town of Arraba, near Jenin.

Adnan, a Palestinian Islamic Jihad leader who had been imprisoned for a year, was released after a 55-day hunger strike and welcomed home as a hero.

After his release July 12, Adnan stepped out to the rostrum in front of his house and addressed hundreds of people who came from the West Bank and occupied Jerusalem to welcome him. He said Israel made a mistake by detaining him and has paid a high price.

Standing in front of the crowd, Adnan delivered his message of triumph to Israel and an officer of Shin Bet, Israel’s internal security force. The officer had asked Adnan to break the hunger strike he had started May 6 while he was tied to the bed of the hospital, where he was moved after his health deteriorated 31 days into the strike. Adnan replied, “I will be freed with God’s help.” According to Adnan, the officer replied, “God is now preoccupied in Syria, and when He is done, He will make you achieve victory.”

The sheikh said in his speech, “Haim Murad [the officer], you are probably listening to me today. Here I am with my children, my family and mother [who was not allowed to visit]. I was detained and preserved my faith, and you were defeated. On the second time, your defeat was greater.”

Adnan generated public sympathy, and some even called him a saint. He was more than a detainee affiliated with the Islamic Jihad movement; he became a symbol for all Palestinians and others around the world who believe he achieved a victory for human rights and freedom. His mother, Nawal Moussa, said that throughout his strike, she received dozens of calls from people all over the world saying in Arabic and other languages that they support him.

In December 2011, Adnan was arrested and went on a 66-day hunger strike in protest against his administrative detention. Adnan was freed in April 2012 without his detention extended.

Israel extended his detention for another three months early this May.

After his latest release, happiness prevailed at his house. His paralyzed mother, 75, alternatively laughed and cried while speaking to the reporters about her “son, the hero.”

She told Al-Monitor, “My son has been tenacious of his right since he was young, and I did not expect him but to be victorious, as he triumphed the first time.”

Adnan set the conditions of his hunger strike on the day he announced it. He wanted a guarantee that his detention would not be extended and that he would be released at the dawn of July 14, before Laylat al-Qadr (Night of Power), which Muslims consider the most important day of the year — the 27th day of Ramadan.

Although he was at his weakest, his lawyers and physicians who were following up on him said he insisted on those conditions. He said to the crowd, “As I was getting closer to death, I was becoming more committed to my freedom.”

Speaking to Al-Monitor about the decision to go on a hunger strike, Adnan said, “Before the administrative [detention was] extended, I went on a cautionary strike. I was not supervised by the Shin Bet, but rather the prison service operational intelligence unit. The fellow prisoners told me to not exhaust myself. I said that I would go on strike for three days as a warning. They did not get my message. On May 6, I started an open-ended hunger strike.”

This time, it was not an easy battle for Adnan. The situation inside and outside the prison was not adequate for a new strike in light of the current political conditions and the receding popular support for prisoners. Yet, he insisted on the strike. He said, “The thing I thought about the most at the beginning of the strike is that Israel thought that it has deterred the previous administrative detainees — who have already gone on hunger strikes for a long period of time — by re-detaining them and not ending the administrative detention.”

Even Adnan, after he was released July 12, was detained once again for a few hours July 13 at the entrance to the Al-Aqsa Mosque.

Adnan continued talking about the Shin Bet’s attempts to pressure him through other prisoners. He said, “They sent the head of the Higher Commission of Follow-up of Prisoners and Released Affairs and leaders of the Islamic Jihad to the Assaf Harofeh Medical Center to convince me not to go on a hunger strike. They told me that ‘the Shin Bet decided to kill you this time.’ I replied that I would not end my strike, that God’s mercy and victory would be seen soon.”

On the 42nd day of the recent strike, Jawad Boulos, legal counsel for the Ramallah-based Palestinian Prisoners Club who was following Adnan’s strike since day one and taking part in the negotiations between Adnan and the prison administration, told Adnan that the military prosecution intended to reach a solution with him after he got to a point where he could die at any minute, according to Adnan.

Adnan said, “At this moment, I expressed the demand of being immediately released, as they offered to free me once I serve my detention period until Sept. 5. I refused [and remained committed] to being freed immediately.”

Adnan and Israel reached an agreement June 28 (after negotiations that started June 16) that he would break his hunger strike and be released.

Dozens of Israelis, including Israeli Knesset member Dov Khenin, expressed solidarity and support for Adnan’s right to be released. In his speech, Adnan thanked them.