Palestinian Khader Adnan, released from prison after 54 days of hunger strike, tells Al-Monitor that the Israeli press ignored his latest battle, trying to silence his fight against administrative detention. 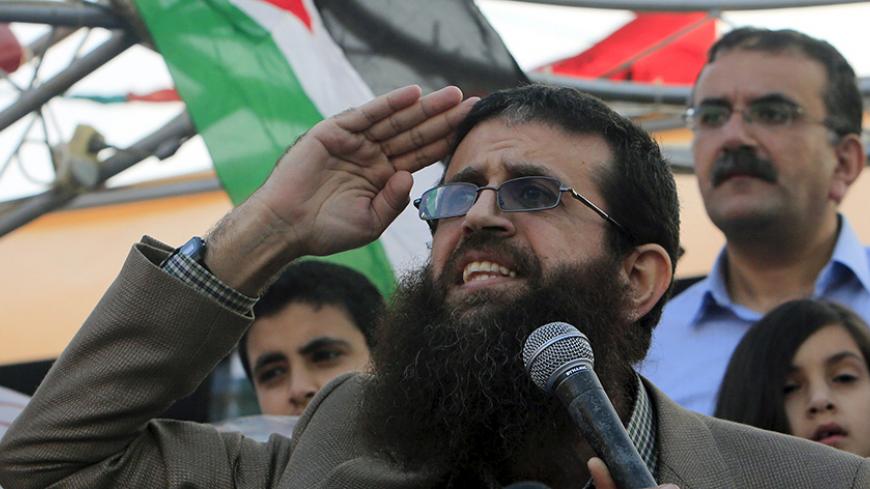 “That was their third mistake. In fact they’ve now given me enough room to continue my worthy cause for the Palestinian people,” Adnan Khader told Al-Monitor a few hours after being detained on July 13 for questioning at the entrance to Al-Aqsa Mosque. The incident occurred just one day after his release from several months of administrative detention. Adnan had been arrested once again by the Jerusalem police, who claimed that he had violated the terms of his parole.

Adnan claims that no restrictions had been imposed on him, and he was released several hours later.

“The Israelis circulated my photo to the policemen so they could identify me and prevent me from going to Al-Aqsa. But, thank God, I was able to recite the holy prayer of Laylat al-Qadr [the holiest night during the month of Ramadan] at the police station in blessed Jerusalem,” he said.

Adnan was arrested and incarcerated several times in recent years by the Israel Defense Forces (IDF). Twice he was able to beat the Israeli defense establishment and was released from administrative detention following two extended hunger strikes in protest of his incarceration.

This time around, Adnan went on a 54-day hunger strike, during which he was hospitalized in serious condition at the Kaplan Hospital in Rehovot, forcing the IDF, Shin Bet and the Israel Prison Service to reach a deal with him and his lawyer for his release. He was discharged from prison in the early morning hours of July 12. From there he proceeded to Arraba, his village in the Nablus district, where he was welcomed by a few dozen people who had waited all night to celebrate what they called Khader Adnan’s second victory over the Israelis.

Adnan began his second hunger strike following his arrest last year during Operation Brother’s Keeper in June 2014, after the kidnapping and subsequent murder of Israeli teenagers Naftali Frenkel, Eyal Yifrah and Gil-Ad Shaer. He happened to pass by an IDF roadblock that had been set up near Nablus and was taken by Israeli security forces to an interrogation facility and placed under administrative detention. By virtue of the 1979 Emergency Ordinance, an administrative detention can be done on the basis of classified intelligence that is withheld from detainees and their attorneys, making it impossible for them to refute the charges. Throughout his arrest, Adnan demanded to see the alleged incriminating evidence and go to trial to refute it.

During his first 66-day hunger strike (from December 2011 to February 2012), he was able to rally many of the Palestinian prisoners incarcerated in Israel to also go on hunger strike as an act of solidarity.

After his release, Adnan became known as the “father of the detainees.” He joined hunger strikes as a gesture of solidarity with other prisoners who were inspired by him, including Samer Issawi, whose strike lasted 200 straight days.

This time, too, the state reached an agreement with Adnan’s attorney, Osama Saadi, resulting in his discharge from administrative detention after he was hospitalized in serious condition. On the last leg of his hunger strike, rumors that he was in a critical state started spreading throughout the territories. With the rumors spread concern of an outbreak of violent demonstrations in the territories.

Back in 2012 and now as well, Adnan’s hunger strike succeeded in raising public awareness of the issue of administrative detention and the frequent use — as human rights organizations allege — by Israel of administrative detentions against Palestinians. According to the Israel Prison Service, in a report updated in May, there are some 391 administrative detainees incarcerated in Israel for different durations. Although imprisoned without trial, they are nevertheless kept there by the courts, which have been provided with intelligence information about their alleged intent to commit a security-related offense or coax others into committing one. Their administrative detention status goes into effect only once the detainee has been arrested, and is validated by the court after being presented with classified intelligence that establishes the intent to commit a security-related offense.

During Adnan’s first administrative detention in 2012, the Prison Service disclosed footage showing him attending the funeral of a militant from the Islamic Jihad’s military wing (published by Israeli TV Channel 10). In it, he is portrayed as encouraging the organization’s militants to put on explosive belts and martyr themselves. After his release in 2012, Al-Monitor met with Adnan at his home in Arraba. He claimed that the video footage Israel released had been edited, taking things out of context. According to him, he was talking in general terms about the continuation of the armed struggle against Israel, whose purpose was to end the Israeli occupation.

A few hours after his release from his long administrative detention, Al-Monitor spoke with Adnan for the first time. In a faint and hoarse voice, he said, “I beat the Israeli system; that’s obvious. But that’s not only my own personal victory. It’s a victory of all the Palestinian detainees and prisoners whom I wish never to experience hunger or sorrow. If by my actions — my protest and my victory — I have given them a pound of sugar [meaning tools or encouragement] for a better future — then I am satisfied.”

Al-Monitor:  Are you aware of the fact that you’ve become a Palestinian hero, an icon for the administrative detainees?

Adnan:  Alhamdulillah [praise the lord]. Alhamdulillah. During the first time, I went on a hunger strike as soon as I was arrested. Now, after my arrest, I first gave them a chance to release me. I started an intermittent hunger strike every other week to relay a message that I was about to start an indefinite hunger strike. This way, I conveyed a message from the Hadarim prison: "Don’t push me to the wall and force me to take my final move." There’s a saying in Arabic: Anyone who keeps making the same mistake over and over again has no brain.

Al-Monitor:  Were you surprised to be released?

Adnan:  I knew I’d succeed. I aimed to be discharged on July 12 so I could be home for Laylat al-Qadr. I was deliberately discharged in the wee hours of the night, after 1 p.m., so I wouldn’t make it to the welcome celebrations held for me in Arraba, my village. Yet people did wait for me until dawn, when I spoke about world freedom and putting an end to administrative detentions and called for freedom for all — be they Jews, Christians or Muslims.

Al-Monitor:  How did the Israeli public react to your struggle?

Adnan:  I have to say that there were many Jews who protested my arrest and supported my struggle. I’d like to thank them from the bottom of my heart. I’ve mentioned them in all my speeches. I mentioned [leftist activist] Anat Matar and her friends, as well as the wife of prisoner Walid Daka. But you should know that the Israeli media — all the outlets — totally ignored my legitimate protest. They withheld information from the public about my struggle. They simply vetoed any piece of information or a photo of me in order to silence my struggle. Only after my release did the Israeli public find out that I was on strike for 54 days and that I won, big time.

Al-Monitor:  In what way was your wife, Randa Musa, involved in the campaign for your release?

Adnan:  My parents and my wife were very vigorous concerning the battle for my release. I have six kids today. During my first arrest, I had two. Back then, my wife was pregnant and gave birth to my son Abdel Rahman while I was still incarcerated. Now I have triplets: Mohammed, Ala’il and Hamze. Let me tell you that women’s organizations were impressed by my wife’s struggle. She was active all over the place. She would come to the hospital, sit on the floor and say, "I’m not moving until my husband ends his strike, because I care for his health and his well-being." Thanks to her activity and spreading the news around the world about my struggle, I won. We did.