Hunger strikes by Palestinian detainees are sweeping Israeli prisons in protest of what looks like a pattern of abusive administrative detention rulings. 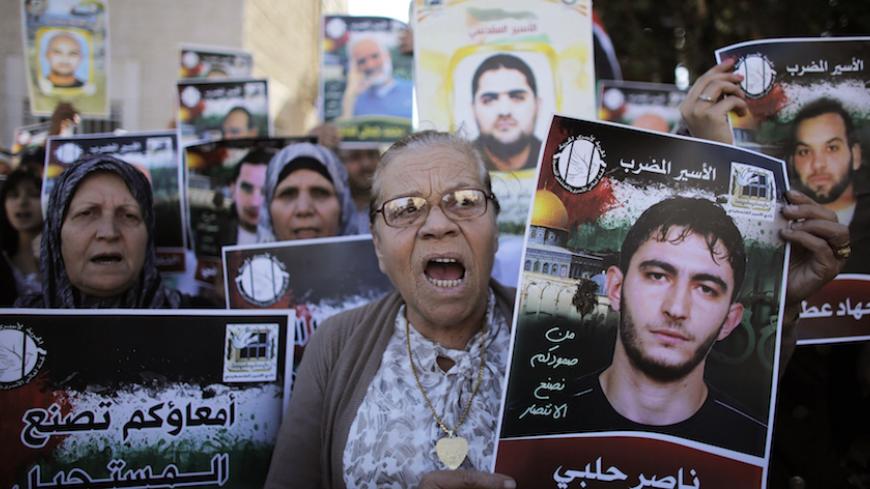 Palestinian protesters hold placards depicting their relatives during a demonstration to show their solidarity with hunger-striking Palestinian prisoners held by Israel, outside the Red Cross building in Jerusalem, June 12, 2014. - REUTERS/Ammar Awad

RAMALLAH, West Bank — Umm Mohammed from Arraba, a Palestinian town near the city of Jenin in the northern West Bank, sobs and prays for her son Sheikh Khader Adnan, long detained in an Israeli prison.

Adnan, 37, was arrested for the 10th time on July 8, 2014. He has been on hunger strike since May 5 in protest of the prison authorities’ decision to renew his administrative detention for the third time in a row. Israel had initially referred Adnan to administrative detention for a period of six months. At the end of that period, his detention was renewed for another six months (which was later shortened to four months), followed by a third four-month extension.

Umm Mohammed, 75, suffers from diabetes and high blood pressure, and recently spent 25 days in the hospital with an intestinal infection. “I have been sick and bedridden for four months. I am following Khader’s news on television. Since he announced his hunger strike, I have been praying day and night for him to survive this predicament and overcome it victoriously. I feel helpless. There is nothing I can do but pray for him,” she told Al-Monitor.

“God willing, he will be released safe and sound to see me before I pass away. He was worried about my health before he was arrested. I follow news about him with a heavy heart. He named his hunger strike ‘I sacrifice my life for you, mother.’ I tell him: 'Son, you are my life and my everything,'” Umm Mohammed said, tears streaming down her cheeks.

Adnan first went on hunger strike at the end of 2011 for 66 days, setting an example for other detainees. He is one of the Islamic Jihad leaders in the West Bank and one of the most prominent activists and defenders of Palestinian prisoners in Israeli prisons. In December 2011, he went on a 66-day hunger strike, which ended in his release on April 17, 2012. This prompted other prisoners in administrative detention to follow suit, such as Hana Shalabi, who was deported to Gaza, and Bilal Diab, Thaer Halahleh, Tarek Qaadan and Jafar Ezzedine, all of whom are affiliated with Islamic Jihad.

Randa Moussa, Adnan’s wife, told Al-Monitor, “We know nothing about his health, as he is in solitary confinement and refuses all medical tests, to keep the prison’s authorities in limbo so they do not know what action to take.”

She added, “My husband is currently in solitary confinement in Hadarim prison. He refuses to take drugs or vitamin supplements, undergo medical tests or consume salt. He is also boycotting Israeli courts and refuses to be represented by his own lawyer or by any of the lawyers affiliated with human rights organizations before the courts.”

Moussa went on, “According to the lawyers, Israel has not charged my husband with any crime but has renewed his detention for the 10th time. He is insisting on pursuing his open-ended hunger strike until victory or martyrdom. He wants to break the administrative detention policy and will not give up on his demands.”

Issa Karake, the Palestinian minister for prisoners’ affairs, told Al-Monitor, “The situation is flaring up among the ranks of prisoners and we have been informed that a number of them will join Adnan in his hunger strike.” He said that Israel is preparing its solitary confinement cells in anticipation of other prisoners wanting to show solidarity with Adnan. Prisoner Mohammed al-Akrah was the first to go on an open-ended hunger strike on May 17 in solidarity with Adnan.

Karake stressed that the case of the detainees is a legal issue discussed at the international level and brought up at international conferences. He said, “We are working now to benefit from Palestine’s membership in the International Criminal Court, which is one of the strongest strategic means to expose Israel and highlight its breaches of the prisoners’ rights.”

The total number of administrative detention orders in 2014 was 1,140. The longest hunger strike, by prisoner Ayman Atbish, lasted for 122 days, while Ahmad Abu Ras' 18-day hunger strike was the shortest.

According to information by the Palestinian Prisoners Club, the prison authorities have placed Adnan in solitary confinement since he first went on strike, banning any visits from his family and repeatedly inspecting his prison cell as an act of repression.

Prisoners on hunger strike are transported by buses with steel seats that take them to court or the hospital. They are handcuffed with no access to a toilet, and prison guards deliberately eat in front of them or place food within sight to pressure them to break their strike.

A Red Cross medical report says the pressure on the Palestinian Authority is bound to increase as Adnan continues his hunger strike and his health deteriorates. Dehydrated, he is losing the ability to stand and his eyesight is weakening. The PA has been demanding to take the issue to the International Criminal Court. Any harm or health complications that Adnan might suffer could lead to a further escalation of protests by Palestinian detainees.