The Palestinian prisoner cause is suffering from a lack of public interest, poor local media coverage and no political support. 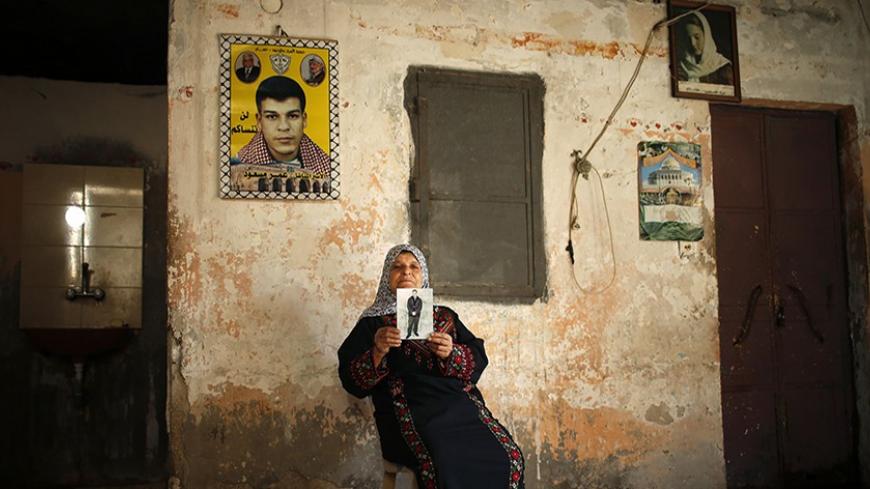 The mother of Palestinian prisoner Omar Massoud, who has been held by Israel since 1993, displays a picture of him ahead of his release, at his family's house in Gaza City, Oct. 29, 2013. - REUTERS/Mohammed Salem

AL-BIREH, West Bank — While Palestinian President Mahmoud Abbas presses Israel to release the final batch of long-term Palestinian prisoners, thousands others are languishing in Israeli jails, and their plight unheard by the main Palestinian factions.

Nahed al-Aqra, 42, is a Palestinian prisoner in an Israeli occupation jail who lost both legs. Every Tuesday, his mother, Umm Mazen, participates in a weekly sit-in in front of the Red Cross headquarters in the city of al-Bireh in the center of the West Bank. A handful of officials and parents of detainees also take part in these sit-ins.

Despite the public, factional and organizational absence from the events in support of the detainees, Umm Mazen does not tire of holding a picture of her son sitting in a wheelchair at the weekly sit-in.

According to an unpublished report prepared by the Palestinian Prisoners Club, a copy of which was obtained by Al-Monitor, the number of detainees in Israeli prisons reached over 5,000 in early 2014. Three detainees have been on an open hunger strike for about two months now, while four others are in solitary confinement. Despite this, public support events remain mostly “weak and inefficient.”

Al-Monitor spoke by phone to former detainee Khodr Adnan, who is considered the instigator of hunger strikes in Israeli prisons after having gone without food for 66 days at the end of 2011. “The weakness of the public support movement is due to factional, partisan and political disputes and conflicts, in addition to the Palestinian Authority’s bureaucratic approach,” Adnan said.

Adnan, who has led several public events in support of the detainees, added: “The scenario involving detainees going on hunger strike in the occupation’s prisons, which always ends with success, has weakened the interaction and motivation of some people. They were not aware that a detainee could die any moment.”

“Any Palestinian organization can excite the public, but the [hunger] strikers do not fall in the same category. We no longer see some of them as Palestinians, while they achieve things without public support and in the absence of official media coverage,” he added.

Palestinian factions are completely absent when it comes to organizing events in support of the detainees. Their participation is usually restricted to important occasions such as Palestinian Prisoners Day, which takes place yearly on April 17.

Khalida Jarrar, a member of the Legislative Council and the political bureau of the Popular Front for the Liberation of Palestine (PFLP), told Al-Monitor that political parties do not play a significant role in supporting the detainees.

“The political distress in the Palestinian street affects the popularity of events in support of the detainees. The status quo has created a feeling that the events are just a routine measure and have not resulted in the release of detainees,” she added.

“However, the issue of detainees unites the Palestinian people, despite their different political affiliations. The political divisions have not affected this issue because the detainees are united inside the prisons,” she noted.

Holmi al-Araj, head of the Center for Defense of Liberties and Civil Rights, told Al-Monitor that popular unity with regard to the actions supporting the detainees “has ups and downs depending on the situation inside the prisons.”

According to Araj, the weak public support for issues concerning detainees stems from “national concern, the multitude of issues preoccupying Palestinian citizens as well as the economic conditions, political division and the bad internal situation, which all resulted in a feeling of distrust among Palestinians with regard to the daily performance [of the government].”

Araj added that the division gave rise to discord and a lack of national unity in the efforts to support the detainees, despite the latter’s presence in the mind and soul of the Palestinian people.

The lack of popular support of the activities concerning the detainees is added to the staggering or limited coverage of the Palestinian media.

“Usually, [these outlets] merely report the news. Comments on the information are immediate but fade away soon, and disappear as if no harm was done [to the prisoners], even though it is a cause that concerns each Palestinian. The whole of Palestinian society is held in prison,” she added.

Sarahne called for a serious strategic media plan that would strive to carry the detainees’ voice to international ears. Coverage should not be limited to the local media and more light must be shed on the violations of prisoners’ rights, since they are the source of many humanitarian stories that have so far been transmitted without much professionalism.

About 1,000 detainees suffer from various illnesses, including 160 who suffer from chronic diseases caused by delays in diagnosis and failure to provide appropriate treatment, according to the report prepared by the Palestinian Prisoners Club.

Physicians for Human Rights (PHR), an organization that closely follows the health conditions of detainees inside Israeli prisons, told Al-Monitor that it received about 300 to 400 medical records of detainees. ِAccording to these records, detainees suffer from various illnesses, from simple malaise to chronic diseases that require complex treatments.

Mahmoud Mahamid, a PHR board member, told Al-Monitor that “many factors affect the health conditions of the detainees, both on physical and psychological levels.” These factors include assaults at the moment of arrest or inside the detention center, torture policies adopted by soldiers and wardens, in addition to solitary confinement policies and harsh conditions related to hygiene, heating and ventilation, according to Mahamid.

Mahamid said that the detainees also suffer from poor treatment and incompetence of the medical staff, who adopt security and political standards rather than professional and international ones. In addition, they suffer from systematic delays in providing the appropriate treatment and neglect periodic medical examinations, and the late diagnosis of chronic diseases such as cancer led to the death of a number of detainees, as was proven in the case of martyr Maysara Abu Hamdiyeh.

PHR believes that the proposed law regarding force-feeding prisoners who are on hunger strike and dispensing treatment against the prisoners' will contradicts the patients’ rights. It aims at using force to demoralize the Palestinian detainees who go on hunger strike and to end their protest. Such actions are usually carried out by the state or its delegates without the protester’s permission and despite his objection, to undermine his independence, in a blatant violation of the principles of the United Nations' Convention against Torture (CAT).

It's worth mentioning that PHR had lodged a protest against the bill last February, by means of a letter addressed to the legal counselor of the Israeli government, according to Mahamid.

Detainees have long complained about the small number of popular solidarity events in support of them, and they have sent messages from within prisons about this weakness and its impact on their struggle.

The lack of popular and institutional support constrains the prisoners’ movement, as there is little pressure exerted on occupation authorities to provide them their rights.