Shlomi Eldar wonders about the political impact of Palestinian prisoner Samer Issawi's hunger strike, going on for more than 200 days. 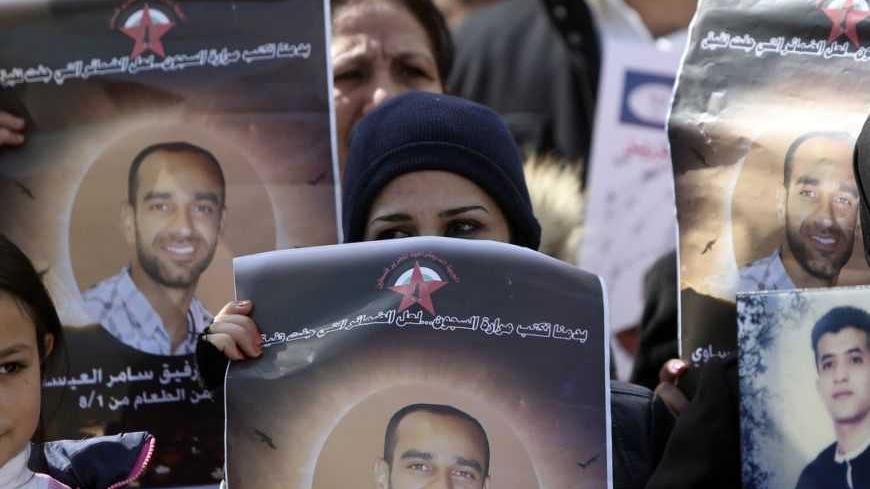 Palestinians hold placards depicting prisoner Samer Issawi, who has been on hunger strike for more than 200 days, during a protest in the West Bank city of Ramallah, calling for the release of Palestinian prisoners from Israeli jails, Feb. 17, 2013. - REUTERS/Mohamad Torokman

Palestinian prisoner Samer Issawi from the village of Issawiya has been on hunger strike for more than 200 days now.

“Two hundred days? How is he still alive?” I asked Khader Adnan. If anyone could give me a reliable answer to this question, it's Adnan. After all, he started the wave of hunger strikes in Israeli prisons about a year ago, and since his release he has emerged as one of the most prominent activists on behalf of Palestinian prisoners.

“It’s possible if he receives a glucose additive,” Adnan explains, “but Issawi hasn’t been taking glucose for the past 21 days, and his situation is deteriorating. He’s been hospitalized in the ICU and his life is at risk. I refused to take those pills and was on a total hunger strike until I was released.”

Adnan kept his hunger strike for 66 days. He was transferred to the ICU of Ziv Hospital in Safed in critical condition. Once his health improved, he was released to his home.

“I told the person who arrested me then, ‘Either you put me on trial or release me. If not, I’ll go on hunger strike.’” With that, Adnan, a low-ranking activist in the Islamic Jihad movement, who worked as a baker in his village, became a well-known figure much admired by the prisoners' community.

According to Adnan, “There has been a reawakening in the Palestinian street, and a deep sense of identification with the prisoners’ struggle. It is like a new Intifada. Last Friday, for example, there were demonstrations in Huwara, Issawiya, Ofer Prison, Budrus, al-Arroub, Kalandia, Bil’in, Nabi Salih, and Ya’bad. People came out to demonstrate on behalf of the prisoners in every one of these places.”

“How many prisoners are on hunger strike now?” I asked.

Adnan was an administrative detainee. In other words, no legal action has been taken against him, and he has not been formally accused. The only reason he was arrested was because the security system decided that he poses a threat to the public. Issawi, on the other hand, is not considered as an administrative detainee. He was released from prison in the [Israeli kidnapped soldier] Shalit deal, but soon violated the terms of his release by leaving Jerusalem for Ramallah. He was arrested again in August 2012 and immediately launched what might become one of the longest hunger strikes in history.

The Israeli media should be covering this, but it all but ignores Issawi’s hunger strike and its implications for the Palestinian Authority. This places the most recent hunger strikes in sharp contrast with Khader Adnan’s highly publicized strike. Nevertheless, last weekend’s clashes between Palestinian demonstrators and IDF forces at the checkpoints reached an intensity that hasn’t been seen in years. Dozens of demonstrators at these points of friction sustained light injuries from tear gas and rubber bullets. The demonstrations were organized by a slew of groups and organizations acting on behalf of the Palestinian prisoners. Their underlying assumption is that the only way to bring about change is through rallies, demonstrations, and strikes among the Palestinian public.

I spoke with Samer’s sister Shirin Issawi who, like the rest of her family, has been especially concerned about her brother’s well-being ever since he was taken to the ICU at the Assaf HaRofeh Medical Center. “According to reports we receive from the Red Cross, his situation is critical. His weight has dropped to just 40 kg, and he suffers from chest pains and a sharp rise in glucose levels. There is also a risk that his kidneys will shut down.”

Have you spoken to him? I asked.

How long has he been hunger striking already?

“Today, Saturday, my brother’s hunger strike will be entering its 207th day.” Throughout his strike, Issawi has refused to see any doctors, including doctors sent by human rights organizations. His family says that they don’t know why. Ayman Agbaria, who manages community relations for Doctors for Human Rights says that because Issawi has refused to see any of their doctors, they not only know nothing about his medical situation, but can’t even take action on his behalf. This stands in sharp contrast to the way that they were constantly at Adnan Khader’s side during his hunger strike last year.

Is it even possible for Issawi to survive without food since he began his hunger strike in August 2012?

“It is possible. We have documentation about Kurdish prisoners who were on hunger strike in a Turkish prison for about the same amount of time as Issawi, and survived. This data about a hunger strike lasting around two hundred days has been documented but never studied.”

I returned to Adnan to ask if he thought that the prisoners’ hunger strike would have any impact on decision-makers in Israel. His answer came as a surprise.

“I joined the hunger strike. I’m in the Red Cross compound in Ramallah. I’ve been on hunger strike for six days now.”

“What?” I asked him. “Again? And you think that this time it will have an impact? That the strike will expand to encompass more prisoners?”

“Only time will tell,” he told me. Adnan’s answer seemed to indicate that the topic of Palestinian prisoners and public pressure to release them would be on top of the Palestinian leadership’s agenda when the U.S. president comes to visit them in Ramallah. Will Israel surrender to the pressure of the hunger strikers yet again, at the last minute?

As Adnan said, “Only time will tell.” We’ll find out in the next few days.