The inaccurate, poorly made Palestinian rifle used in the recent shooting attacks in Jerusalem is a cheap knockoff of an antiquated Swedish gun — a sign that the uprising is still ill-equipped and untrained. 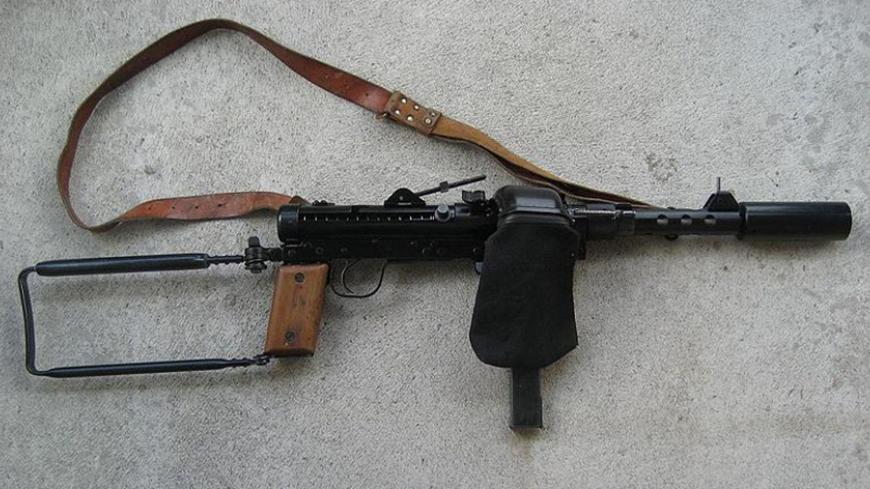 The Swedish Carl Gustav submachine gun (pictured), developed in the 1940s, is being widely copied in Palestine in the form of the makeshift "Carlo" rifle, Jan. 27, 2015. - Wikimedia Commons

It is no longer just a knife intifada. It’s not even an intifada of individuals anymore. Israel’s security forces have begun to note a new type of attack, in which two or three assailants work together, using homemade guns.

For example, two of the most recent attacks near the Old City of Jerusalem — one near Herod’s Gate March 8, and the other near Damascus Gate March 9 — were shootings that used makeshift rifles known affectionately throughout the territories as the “Carlo.” Another attack near the Damascus Gate, which resulted in the death of border police officer Hadar Cohen Feb. 3 involved three perpetrators who also used a homemade rifle.

The Palestinian rifle is a knockoff of the old Swedish Carl Gustav submachine gun, which was developed in the 1940s. The Palestinians are hardly proud of this rather primitive product, which is manufactured using privately owned lathes in Nablus and Jenin. Modeled after an antiquated weapon dating back to the final days of World War II, the Carlo is not known for its dependibility.

The systematic manufacture of the Carlo in the territories began more than a decade ago. In those early days, it was made and used primarily by gangs of car thieves and drug dealers in turf wars.

One Palestinian source intimately familiar with this manufacturing process told Al-Monitor on condition of anonymity, “You don’t need a lot of imagination, professional skill or resources to manufacture the Carlo. All you need is a piece of pipe. With a lathe, you can convert it into the barrel, chamber and firing pin of a rifle.”

The Carl Gustav was also the inspiration for another local gun known as the “Port Said,” which was manufactured in Egypt in the 1960s and 1970s. Back then, the Egyptian knockoff was used by the first Fedayeen fighters, who were active along the border between Egypt and Israel. In time, the Port Said became a brand that Fatah was proud to produce as well, though the same can’t be said about the Palestinian Carlo. The Carlo, for the most part, is little more than a source of embarrassment.

“We are certainly capable of better. Just look at what Hamas did with the Qassam rocket when they were in a state of crisis,” another Palestinian security source told Al-Monitor on condition of anonymity.

Unlike the Carl Gustav, the Carlo can’t be switched between automatic and manual. It sprays all the bullets in its clip as soon as the trigger is pressed. It also has a smooth-bore barrel, without the rifling grooves that cause the bullets to spin, improving their accuracy.

Palestinian lathe operators in the territories started their gun-making operations with the underground manufacture of Carlos for local gangs. They have yet to attain the high level of skill needed to produce a rifled barrel, which would probably substantially increase demand for the Carlo. Perhaps the manufacturers have not needed to improve their operations because their work is done for criminal enterprises, instead of armed terrorist groups, which do not need homemade-style weapons. They already have more than enough Kalashnikovs as well as M-16s, which are smuggled into the territories from Israel.

So far there have been two prototypes of this weapon: one with a short barrel, reminiscent of the Israeli Uzi, and the other with a long barrel. It is the latter that was used in the recent attacks. The cost of the Carlo runs between 3,000 and 17,000 shekels (between $770 and $4,400), depending, of course, on who made it and where it was bought.

“A few hundred of these rifles are making the rounds in the territories,” a Palestinian source from the Jenin region told Al-Monitor on condition of anonymity. “These guns can be found in quite a few homes, mainly for self-defense, but also just to boost people’s egos. In our society, if you don’t have a gun, you don’t count, and that’s especially true in the refugee camps. Even an old, unreliable Carlo is better than nothing.”

In some sectors of Palestinian society, it is customary to shoot into the air to mark happy occasions, particularly weddings. Because of the gun’s poor accuracy, however, quite a few such incidents have ended in tragedy. In fact, the numbers are so high that the Carlo is explicitly banned during many celebrations and at Hamas, Fatah and Islamic Jihad gatherings — and everyone in the territories knows it.

“The use of the Carlo in the recent attacks instead of the Kalashnikov is actually quite encouraging,” a source in the Palestinian security forces told Al-Monitor on condition of anonymity. “What it means is that real guns haven’t been introduced into the campaign. In other words, not only have armed Palestinian groups stayed out of this intifada, they haven’t even armed the young people committing attacks in Israel. The only people adopting this underground gun are individuals who lack access to or the means to acquire real guns. They simply chose to use an available Carlo instead of a kitchen knife.”

The Shin Bet has so far paid little attention to the Carlo's manufacture in the territories, and this is probably why there have been no operations to destroy the lathes used to make the gun in Nablus and Jenin. Given the enormous number of guns in the territories (particularly Kalashnikovs and M-16s), the Carlo is of such poor quality that it really doesn’t threaten to change the rules of the game. The real question is whether the most recent attacks will change that attitude.

“The issue of guns in the territories is a problem not only for Israel, but also for [Palestinian President] Mahmoud Abbas’ regime and its struggle to maintain law and order, which were achieved due to the considerable efforts of the Palestinian security forces,” one of the Palestinian security sources told Al-Monitor. “There has been order in the territories ever since the second intifada ended. Not everyone can wave a gun in the street anymore. ‘One law, one weapon, under one authority’ was the motto of President Abbas, and he indeed succeeded in his task. But we still see a stream of M-16 rifles pouring into the territories. Some of them are brand new, straight out of the box. They come here from Israel due to cooperation between certain groups and squads in the territories and Jews."

He added, "That is why before you start a campaign against the Carlo, you should look into the smuggling routes for M-16s. That would benefit both you and us.”