Prices of illegal weapons in West Bank on the rise

The Palestinian police have been leading wide-scale efforts to crack down on gun manufacturing and illegal trade in a bid to reduce the phenomenon of tribal and family shootings, while prices of illegal weapons have been soaring. 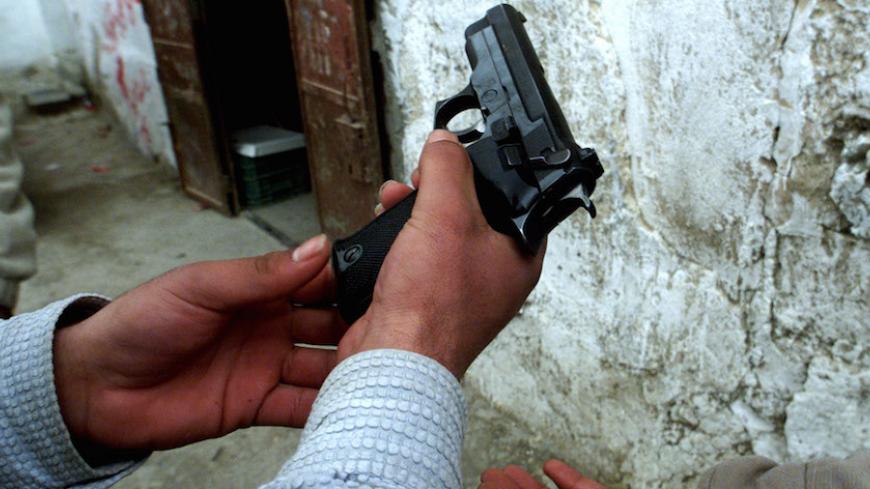 A marked increase in the black market price of weapons in the occupied territories has produced a flurry of attention. Press reports have indicated for example that the coveted M16 gun that used to be sold for 40,000 shekels ($10,400) a year ago is currently sold for 65,000 shekels ($17,000). Pundits are not clear as to the reason for this spike and whether it is a result of the Israeli crackdown on smuggling on the Jordanian and Egyptian borders, or of the Palestinian security campaigns following fatal shootings in local feuds. A third argument suggests that maybe Palestinians are hording guns in fear of potential lawlessness and chaos in the Palestinian territories.

Two Palestinians were killed and 14 were injured on June 29 in a tribal dispute in the northern West Bank town of Yabad. In Nablus, violence using illegal guns led to five deaths on the same day. While use of illegal weapons has continued, no fatalities have occurred since.

According to Palestinian police spokesman Maj. Gen. Adnan al-Damiri, illegal weapons come from two sources: homemade guns and smuggled weapons. Damiri told Al-Monitor that the Palestinian security forces have been working hard to crack down on anyone possessing unregistered guns. “We have launched wide and continuous efforts to close gun-making shops and to arrest anyone who carries a gun that is not properly registered and licensed,” he said.

All weapons’ serial numbers are registered with the Palestinian government and are shared with Israeli security. Other than the official security officials, only persons whose jobs require personal protection, such as money changers and private security men, are allowed to register their weapons.

Damiri said that in the past year, four gun-making shops were raided and closed down and hundreds of individuals with illegal guns, including security officials, have had their guns confiscated and have been imprisoned. “Following the fatal shootings in Nablus and Yabad by individuals using illegal weapons, we have been exerting continuous efforts that led to impressive results,” he said.

Damiri further noted that the police received strong support from President Mahmoud Abbas and Prime Minister Rami Hamdallah to carry out the crackdown on illegal weapons. “We are operating on the basis of zero tolerance guidelines. Our orders from the president and prime minister are clear. No one carrying an unlicensed weapon is spared from punishment,” he said.

A senior security expert spoke to Al-Monitor on condition of anonymity. He said that while metal shops produce homemade guns that are referred to as Carl Gustaf, the most popular weapons in high demand are branded pistols and the M16 US-made rifles. “For personal guns, the 9 mm pistol is in high demand, with prices going up to 15,000 shekels [$3,900], while the M16 machine gun sells today for 65,000 [$17,000],” the source said. According to press reports, the M16 rifle used to sell for 40,000 shekels ($10,400).

What makes the M16 in demand is the fact that its ammunition is readily available and relatively cheap. An M16 bullet sells in the black market for about 3 shekels ($0.75), while a bullet for a Kalashnikov is worth 8-10 shekels ($2.10-$2.60), the anonymous security source told Al-Monitor.

The security source echoed what is well-known in Palestinian circles about the sudden rise in the black market cost of weapons, but he was not sure of the reason. Damiri insists that the spike in prices is the result of supply rather than demand. “There are clearly less illegal guns available now than before, and this is definitely the result of our security efforts,” he said.

Damiri added that if someone today wants to buy a gun, he has to think twice about it. “They have to pay a much higher price and, at the same time, they risk being caught and losing their guns and their freedom,” he said.

He noted that as a result of the police efforts, Palestinian cities are much safer than Israeli cities. “Today, Ramallah is safer than Tel Aviv, which is facing a major problem with illegal weapons because of organized crime.”

The fact that the Palestinian government is responsible for internal security in major cities in the West Bank certainly requires its security forces to put much effort and personnel to ensure the control over the unauthorized use of weapons. The most recent crackdown following fatal killings have dried up supplies and has acted as a deterrent for anyone interested in buying guns on the black market. However, there is no guarantee that this current condition will be sustained if the Palestinians’ confidence in their government is shaken.