Though the fight against the Islamic State in Iraq is slowly waning, gun violence still riddles Iraq's Kurdistan Region where firearms are readily available and licensing is easily bypassed. 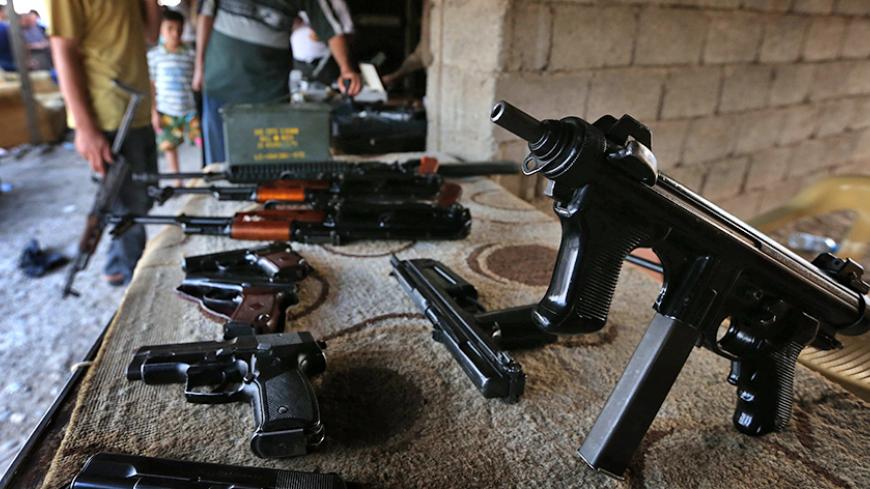 ERBIL, Iraq — The young coach tried to calm his players as they argued with the referee who had sent off three of their teammates during a soccer game in the city of Sulaimaniyah on Saturday evening. As the row grew, some fans intervened and in the confusion, one could be heard shouting at Dyar Bakr's players, “I am going to bring my gun and shoot you!” A few minutes later, the man appeared with an M-4 assault rifle in his hands, and as Bakr ran to stop him, a bullet pierced his chest and another hit his leg. He died later on a hospital bed.

Bakr is just one of the latest casualties in the Kurdistan Region of northern Iraq, where an endless supply of firearms, booming local gun markets, inadequate regulations and worsening poverty due to an acute financial crisis mean firearms are being used on a massive scale to commit crimes and settle scores between citizens.

During the Clasico game in late April, Barcelona fans in Erbil, the capital of the Kurdish region, celebrated their team's victory by firing anti-aircraft weapons and machine guns in the air. Twice earlier this month, traffic police in Erbil attempting to seize vehicles without proper documentation came under fire and one officer was abducted by armed men.

Maj. Hoger Aziz, spokesman for the Erbil police, said the region is recovering from almost three years of war with the Islamic State (IS) and given the large number of peshmerga fighters and other volunteers who took part in pushing back the militants, it is understandable that the number of firearms has increased in the market, and some are being used in crimes. “There are places that trade in illegal arms. We have shut down some of them and arrested those who carry illegal guns,” said Aziz. But despite the best efforts of the police, the state of lawlessness continues. In January, when a young peshmerga was killed by two men near Duhok, 3,000 tribesmen, mostly peshmerga, came out carrying rifles, demanding that the killers be executed immediately.

Obtaining a firearm in the Kurdistan Region is as simple as registering a phone number. In Sulaimaniyah's weapons market, where firearms are sold next to watermelons, vegetables and bread, all that is required of the buyer is enough cash and an Iraqi identification card. "The cheapest gun is the Turkish pistol for 40,000 dinars [$34]," said an arms dealer in his small shop in the center of Sulaimaniyah, referring to a cheap pistol that has become infamous for its use in crime. Other firearms are much more expensive. "An Osama AK-47 is around $2,500," said another dealer, referring to the short-barreled rifle that Osama bin Laden kept at his side in TV appearances.

The weapons markets were born out of necessity in the 1990s. The KRG has an ambiguous status as non-state entity with no rights to purchase arms in international markets. Therefore, these markets were set up partly to arm the peshmerga by bringing in arms illegally from the neighboring countries. "The KRG has failed to regulate this sector properly,” said Ismail, whose parliamentary security committee has not convened since late 2015 due to political disputes between the parties.

“We need to review the law that allows people to carry firearms and take strong legal action against those who carry arms illegally,” said Aziz. The police spokesman believes that the authorities “must tighten their criteria so fewer people can obtain firearms and those whose firearms are seized by the police cannot be reissued licenses under any circumstances.”

But the licensing process is fraught with flaws. Ahmad, a trader in Erbil who handles large amounts of cash on a daily basis in the absence of a reliable banking system, recently bought a pistol for $1,200. "I have seen many shootings where I work and I feel I need a gun to protect myself," Ahmad told Al-Monitor. Once he purchased the firearm, he then went through the process of applying for a license from the governor’s office, which meant going through a tiring three-month process of being examined by a psychiatrist, vetted by the police and having two witnesses testify about his character. "If the process were executed according to the letter of the law, then it would be a good process and could prevent bad people from obtaining firearms, but as it currently stands, it is only a money-making machine for the authorities,” said Ahmad, who now carries his pistol in his car everywhere he travels. “When I received the license, a well-connected individual approached me and said he could have obtained the same license for $200 without going through the process.”

Lawmakers and campaigners have tried in vain to persuade the KRG to bar some 400,000 peshmerga and other security forces under Interior Ministry command from taking their guns home when they go on leave. There have been numerous cases of these weapons being used by children, leading to fatalities.

Late last month, I was asleep at a friend’s house in Erbil when the repeated crackle of gunfire nearby made me jump out of bed. “Is it Daesh, Daddy?” asked the 5-year-old son of my friend, referring to IS, as volleys of tracers lighted up the sky a short drive from the US consulate. "No, it is not Daesh, it is the usual Khaylanis,” responded his dad, referring to a Kurdish tribe notorious for its infighting with little respect for the authorities in the capital.

As authorities hesitate to take strong measures against arms dealers, powerful tribes and others carrying guns in public, the body count rises.