Tired of the dangers of widespread, unregulated gun ownership, civilians in some areas of Aleppo province are demanding relief. 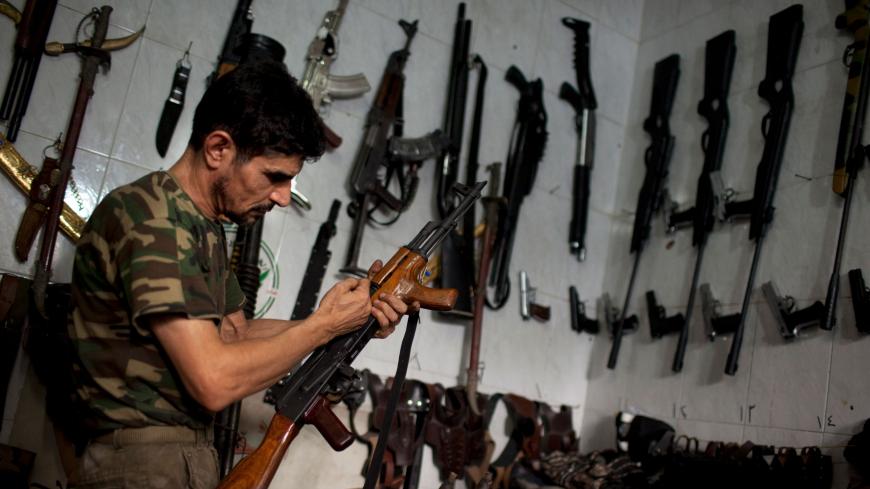 ALEPPO — The clock is winding down on unrestricted gun sales in opposition-controlled areas of Aleppo province in Syria.

The opposition's Free Syrian Army (FSA) and its affiliated Syrian National Army (SNA) have set a deadline for gun dealers and unlicensed stores selling ammunition and firearms to halt their activities in rural Aleppo. The groups warned that those failing to abide by the decision will face harsh sanctions.

The SNA gave all those involved one month, beginning June 27, to comply. Once the deadline passes, anyone caught with firearms or ammunition destined for trade will be arrested and referred to the judiciary and could face "severe punishment." According to a statement, SNA will grant official written permits to some of the merchants who supply FSA factions with arms and ammunition during military operations.

He said the decision is necessary and will improve security and stability in the province.

“In our eyes, prohibiting arms trade will help prevent the assassination cells and vandals of the regime forces and [Kurdish] People's Protection Units from acquiring arms and conducting terrorist attacks in the FSA-held areas," he said.

He stressed that the need for arms trade in these areas is no longer widespread. “The merchants delivered the weapons to the rebels during the battles fought against the regime forces and Islamic State [IS], and they continue to assume a role in supplying the FSA factions with weapons and ammunition. This is why we are keen that store owners and trusted merchants obtain a written permit to continue to do business under the decision.”

According to Hamoud, these trusted merchants will need to conduct their activities under the SNA's supervision. The objective is to ensure that arms aren't randomly sold to civilians and transactions are regulated in a way that keeps the area stabilized.

The SNA has developed its own inventory management, and now there’s a need to move to gun control among civilians, which must start with the dealers and merchants. “The objective is not to totally prevent civilians from acquiring arms, but to license the weapons and control the movement of arms from one person to another. This will allow us to hold weapons owners accountable in case of any crimes or shootings,” he explained.

Selling arms is a very common practice in cities such as al-Bab, Azaz, Afrin and Marea, and it's become easy for civilians to acquire weapons. The risks were seen in militia infighting and family feuds, and even during FSA fighters' funeral services, weddings and other occasions. Residents demanded a halt to such violations.

Abdel Fattah al-Hussein, a media activist in Azaz, told Al-Monitor, “The … widespread availability of arms among civilians and their easy use in residential areas has posed a threat to people’s lives in rural Aleppo during fights and special occasions when there is heavy shooting into the air.”

He added, “We hope the [SNA] rushes to implement the decision and works seriously to shut down all shops selling arms and confiscate weapons the civilians possess in residential cities and compounds. This would promote security and stability."

However, a gun shop owner in Azaz disagrees. Speaking to Al-Monitor on condition of anonymity, he said, "The opposition [SNA] was mistaken when it made the decision to shut down gun stores in Aleppo. Such a decision can't be implemented at present because arms merchants assume a major role in supporting the FSA and supplying it with weapons when needed.” He added, “Many FSA fighters come to me to buy ammunition, weapons and spare parts."

He also said the deadline of a month is too short. "I'll need more time to sell all of the weapons I have on the shelves. Halting my business activities will cost me millions of Syrian pounds," he said.