Recent explosions at several weapons and ammunition depots have deepened mistrust between rank-and-file peshmerga forces and their leadership in the Iraqi Kurdistan Region. 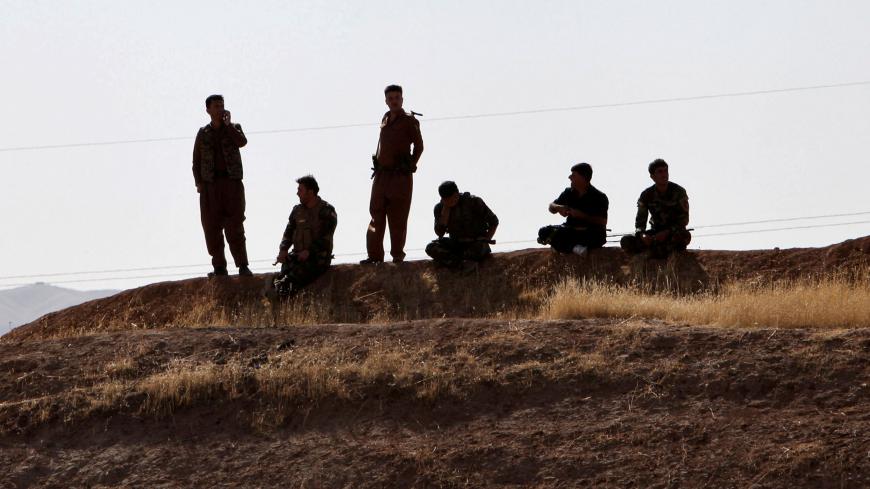 Abdullah was driving back to Sulaimaniyah from Erbil in the evening of July 2 to avoid the sweltering heat wave that had brought life to standstill during the day. As he approached the hills of Tasluja to the west of the city just after 9:30, he saw a fire raging. Soon he heard deafening explosions that sent what appeared to be missiles and mortar shells into the air, lighting up the sky and sending Tasluja's bewildered residents running for their lives. Abdullah, not his real name, knew that a weapons and ammunition depot was on fire.

Two days earlier there had been another terrifying explosion at a peshmerga ammunition depot in Bahrka just outside Erbil. The authorities ruled out foul play and blamed the heat wave and the peshmerga's lack of expertise in storing explosives and arms. No one bought the explanation, including Abdullah.

Abdullah knew the depot well. From 1981 until the end of Iran-Iraq War in 1988, the Baathist authorities forced him and many other truck drivers to carry small munitions and mortar shells from the British-built Al-Rasheed base in southeast Baghdad to Sulaimaniyah. "All these years, there was no incident except in 1986 when the Iranian air force bombed the depot," Abdullah told Al-Monitor a week after the explosion in Sulaimaniyah. "I have seen it. It is a solid depot built into the hill and It is difficult for me to believe that it could just catch fire because of high temperatures." A high-ranking peshmerga officer who worked for the Patriotic Union of Kurdistan (PUK) confirmed that while the depot was old, it was built according to international standards and high temperatures cannot explain the explosion.

The explosion in Sulaimaniyah was followed by another at an ammunition depot in Dahuk on July 3. Two days later, another fire in Chwarqurna, in Sulaimaniyah province, broke out in the depot of an arms dealer that burned for over 45 minutes. In 2017 there were at least two other explosions at peshmerga ammunition and arms depots in Erbil.

These mysterious explosions have brought to surface a deep lack of trust between the rank-and-file peshmerga and their senior commanders loyal to their political parties at a time when advisers from the United States, the United Kingdom and Germany are trying to help the Kurds to reform the force that was an essential component of the coalition against the Islamic State.

"It is obvious the peshmerga commanders stole the weapons the coalition gave us and now they are trying to cover their tracks," claimed a junior officer in an artillery brigade belonging to the Kurdistan Democratic Party (KDP) peshmerga command. "I don't believe the official line." The PUK fighters Al-Monitor spoke with were also dismissive of the official line and pointed to missing guns and equipment.

This distrust was echoed by former peshmerga commander and current Change Movement (Gorran) parliamentarian Mahmoud Haji Omar. He is a member of the peshmerga committee of the Kurdistan parliament. “Our committee asked the acting peshmerga minister to come to the parliament and answer our questions, but he did not,” Omar told NRT on July 4. “If the committees found evidence of foul play, would the political parties allow proper measures to be taken against the conspirators?” he asked, then answered his own question. “If the previous committees are anything to go by, no.”

In the early days of the IS attacks on the Kurdistan Region in August 2014, various members of the international coalition against IS provided training, equipment and weapons including anti-tank guided missiles, to the peshmerga forces. Germany, for instance, provided training, rifles, military equipment and anti-tank weapons systems with 500 missiles in October 2014.

But soon the German rifles became available in the weapons markets across the region. The commanders accused the low-level peshmerga of selling their rifles and the peshmerga fighters blamed their commanders. When I traveled the length and breadth of the Kurdistan Region from Zakho to Halabja, in every weapons market I visited I was told that German G36 and G3 rifles, pistols and equipment such as binoculars were available in abundance for the right price. The arms dealers laughed when I said the peshmerga officials blame the peshmerga fighters for selling their guns. Some dealers suggested that they could even get MILAN missiles if there was a customer. When the controversy found its way into the German press, there was a crackdown and dealing in coalition equipment and weapons went underground.

But the missing military hardware is not limited to small arms and equipment. Al-Monitor has obtained an official document signed by the acting Peshmerga Minister Karim Sinjari dated June 26, a week before the explosion at the depot in Sulaimaniyah, ordering a committee of five officers to investigate the missing MILAN system of the 1st Infantry Brigade of the Peshmerga Ministry. The 1st and 2nd Infantry Brigades are commonly referred to as the “American Brigades,” considered elite as they were trained and armed specifically by the Americans except for their MILAN system, which was provided by Germany. “We ordered the formation of an investigative committee consisting of the officers named below for the missing MILAN weapon of the 1st Infantry Brigade,” read the document, signed “Karim Sinjari, acting peshmerga minister, June 2018.”

Three peshmerga near Duhok told Al-Monitor that during the clashes with the central government forces in October following the referendum for independence, a senior Zeravani commander sold a MILAN system to the Kurdistan Workers Party (PKK) in Sinjar. “The Zeravani officer pretended that he lost the system in fighting with the Popular Mobilization Forces,” said one of the fighters. According to them, a PKK fighter originally from Iraqi Kurdistan abandoned the PKK group and returned to Dahuk. “When interrogated, the former PKK guerrilla revealed that a senior Zeravani commander sold the MILAN weapon to the group.” The three peshmerga said an investigation had been launched but they do not know about the outcome.

“I have heard of a MILAN system going missing, but the main issue is that some American-supplied guns, including M16s, have gone missing in the ‘American Brigades,’” an intelligence officer in the Peshmerga Ministry told Al-Monitor. “Around 12 officers, as senior as colonels, are under arrest for the missing guns.”

The secretary-general of the Peshmerga Ministry, Lt. Gen. Jabar Yawar, denied that any MILAN weapons were unaccounted for. “The MILAN gun is not small [where it can easily] go missing. You can mount it on a pickup; [weapons] that go missing are generally either pistols or small arms that are lost in battles when the individual is surrounded, or drowned, or martyred or wounded," he told Al-Monitor, adding, "A MILAN gun can not go missing. We have not had any cases of a Milan gun going missing.”

Meanwhile, Al-Monitor contacted Col. Dlshad Mawlood, head of communications of the Zeravani Peshmerga Command, for comment about the missing system. Mawlood referred Al-Monitor to Maj. Gen. Aziz Waisi for this matter, but Waisi was not available for comment.

The Peshmerga Ministry maintains that the explosions were caused by the high temperatures and claims to have formed a number of committees to investigate the causes of the explosions. A mid-ranking peshmerga officer who is familiar with the committees as well as with the investigations into the missing German rifles in 2016 is not hopeful. “Germany told the peshmerga officials then, either clean up your acts or we won’t deal with you anymore,” recalled the officer. “Unless there is external pressure from the coalition, the results of these investigations will be whitewashed.”