Key leaders of both parties are championing legislation to directly support Erbil in its fight against the Islamic State. 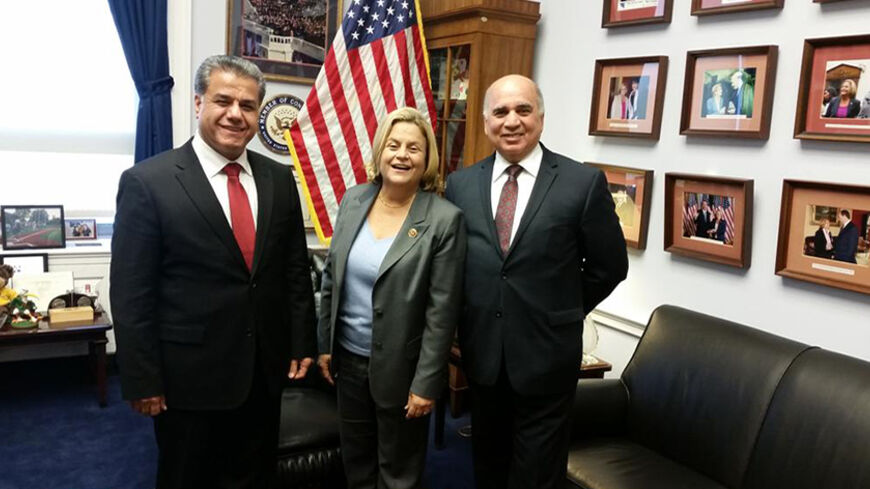 Top House lawmakers on Nov. 20 called on President Barack Obama to directly arm Iraqi Kurdish forces in the starkest sign yet that Congress has run out of patience with Baghdad.

Foreign Affairs Chairman Ed Royce, R-Calif., and ranking member Eliot Engel, D-N.Y., introduced temporary legislation to arm the peshmerga forces in their fight against the Islamic State (IS). Doing so would mark a reversal of current US policy, which has sought to reinforce the central government in a bid to stop the country from splintering along ethnic and sectarian lines.

"We thought a long time ago that our appeals to Baghdad to do the right thing would be heard and [former Prime Minister Nouri al-] Maliki's government turned a deaf ear month after month. We've reached the point where we have allies to our cause of defeating [IS] fighting in the field, without adequate equipment, and we are determined to see that they obtain it," Royce told Al-Monitor. "We want the weapons in the hands of the peshmerga that are on the front line, now."

The bill comes in the wake of an international public relations push by the Kurdish Regional Government (KRG). Top Kurdish officials — including Minister Falah Mustafa Bakir, head of the Department of Foreign Relations, and presidential Chief of Staff Fuad Hussein — were in Washington this week handing out a list of demands to lawmakers and administration officials, while President Massoud Barzani berated Western powers for not providing his forces enough weapons during an interview on French television Nov. 19.

The Kurds have been distributing a half-dozen page wish list on Capitol Hill that includes items such as anti-tank launch tubes and ammunition, heavy machine guns, high-powered rifles and mortars. Their request struck a chord in both chambers.

"It's long overdue," said Rep. Ros-Lehtinen, R-Fla., chairwoman of the panel on the Middle East. "We promised that we'd be helping them out and we did nothing. It's pathetic that they have to come over here with this print-out."

The Senate isn't quite there yet, however.

"We met with the Kurdish delegation today," Senate Foreign Relations Chairman Robert Menendez, D-N.J., told Al-Monitor on Nov. 20. "We think they're incredibly important in our fight [against IS]. They've proven to be on the ground now, and of being effective. I think we need to continue to bolster our effort to help them with the right types of armements. How we do that exactly is still an open question for me."

Congressional sources tell Al-Monitor that there's been some talk about helping the Kurds directly in the annual Defense authorization bill currently being negotiated between the House and Senate Armed Services Committees, but leadership is said to oppose it.

"I think it makes eminent sense to arm the Kurds directly," said Sen. Ted Cruz, R-Texas, a member of the Armed Services Committee. "They are the boots on the ground, they are fighting against [IS], they are capable and for whatever reason the administration has delayed providing them the tools to defeat [IS]. That makes no sense and weakens US national security."

Hussein and Bakir argued that the peshmerga forces need the weapons to go on the offensive and take over territory occupied by IS. Otherwise, they said, IS will continue to be able to replace its losses despite US and coalition airstrikes.

They said their forces have received specialized training in Germany and Italy, as well as from the Turks inside Kurdistan. And Iran has also provided munitions and weapons, they said.

"The main fight on the ground has to do with the Kurds fighting terrorists," Hussein said. "And if [you] compare our weapons with those the terrorists have, it's incomparable."

The Royce-Engel bill would make it US policy to "directly provide" the KRG with "advanced conventional weapons, training, and defense services, on an emergency and temporary basis." Authorized assistance would include "anti-tank and anti-armor weapons, armored vehicles, long-range artillery, crew-served weapons and ammunition, secure command and communications equipment, body armor, helmets, logistics equipment, excess defense articles and other military assistance that the President determines to be appropriate."

The bill would sunset after three years, "in recognition of the emergency nature of this authority," according to a committee press release. The White House declined to comment and the Iraqi Embassy did not respond to a request for comment.

While the bill would require the US government to "consult" with Baghdad before providing the aid to Erbil, it would mark a clear departure from current policy. The House Appropriations Committee approved legislation from Rep. Kay Granger, R-Texas, over the summer that for the first time would encourage the State Department to work with Baghdad to ensure that economic and development aid reaches "Kurdistan" but that language did not cover security assistance.

The KRG is already receiving direct US military assistance through covert CIA programs. And Obama has called for the Department of Defense to train nine Iraqi security forces brigades and three peshmerga brigades as part of its $1.6 billion request for an Iraq Train and Equip Fund that lawmakers are currently debating as part of their year-end spending bill.