Two top Iraqi Kurdish officials, speaking in Washington, say Iraq is divided between an Islamist state, a democratic Kurdistan Region and a 'failed government' in Baghdad. 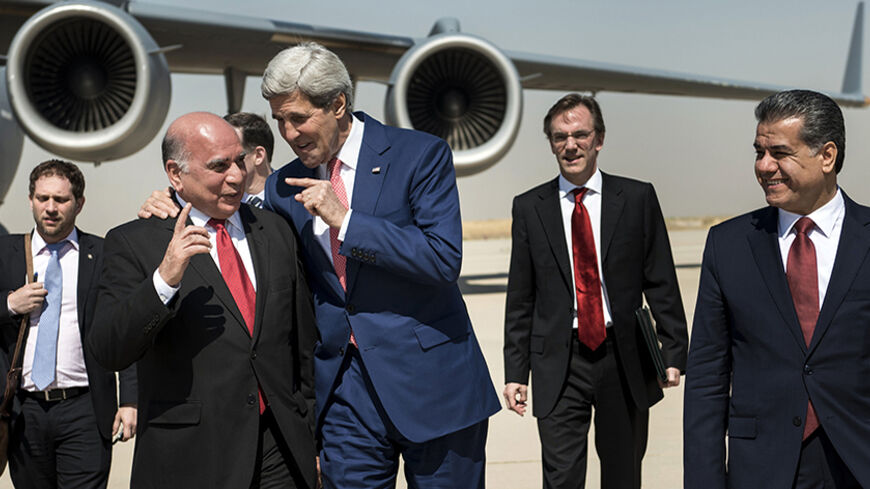 US Secretary of State John Kerry talks with Fuad Hussein (L), chief of staff at the presidency of the Kurdistan Regional Government, while accompanied by Falah Mustafa Bakir (R), head of the external relations department of the KRG, and other officials, at Erbil airport, June 24, 2014. - REUTERS/Brendan Smialowski

An Iraqi Kurdish delegation said they are hearing “more and more understanding” of Kurdish aspirations for greater sovereignty in the aftermath of the radical Sunni Arab seizure of much of western Iraq.

Speaking on July 2 before a packed audience at the Washington Institute for Near East Policy, Fuad Hussein, chief of staff to Massoud Barzani, president of the Kurdistan Regional Government (KRG), and Falah Mustafa Bakir, head of the external relations department of the KRG, said the Kurdish administration would not rush toward outright independence — which is still officially opposed by the United States and Iraq’s neighbors — but would no longer accept restrictions imposed by the Baghdad government.

The KRG, which recently began exporting oil via Turkey, and sold a tanker to Israel, is demanding that Baghdad acknowledge its right to sell oil produced in the region. The Kurds also intend to hold on to Kirkuk and other disputed areas that their peshmerga forces have seized since the Islamic State of Iraq and al-Sham (ISIS) captured Mosul on June 9.

“Pre- and post-Mosul, we are a different country,” Hussein said. Iraq, he said, was already partitioned into three states: an Islamist state, a democratic Kurdistan and a “failed government” in Baghdad.

The two speakers were scathing about the performance of the Iraqi army and its failure to defend Iraqi territory. Hussein said, “80% of the Iraq army has collapsed,” with ISIS seizing sophisticated American weapons. Asked if the Kurdish government would like American weapons, Bakir said the Kurds would like “defensive weapons.”

President Barack Obama's administration, which announced that it was sending about 600 additional US troops to Iraq to help deal with the threat from ISIS, is setting up a joint operations command with the Kurds. Given the proximity of ISIS-held areas, the KRG is a logical and relatively secure base from which to analyze and potentially respond to the threat from the group, which now styles itself the “Islamic State.”

Hussein said the Kurds would continue to participate in efforts to form a new government for all of Iraq in the aftermath of recent parliamentary elections.

“We are going to follow two paths,” he said: helping to establish a government in Baghdad and working “to establish ourselves and have an independent economic life.”

While he insisted that the two paths were not contradictory, David Koranyi, an expert on the Kurds at the Atlantic Council, told Al-Monitor, “It is hard to see a benign scenario emerging in Iraq that would prevent the Kurds from leaving Iraq. … The dilemma for the KRG is more about timing and how to go about it while preserving good relations with the United States and Turkey. The latter seems more amenable to an independent Kurdistan than the former, a remarkable shift from the past.”

Turkey still nominally opposes Kurdish independence out of concern for the impact on its own Kurdish population. But Prime Minister Recep Tayyip Erdogan has developed lucrative economic ties with the KRG and is courting Kurdish votes in his bid to become Turkey’s next president.

Asked by Al-Monitor whether they detected a change in US attitudes toward Kurdish independence, Bakir said, “There is more and more understanding of the Kurdish position, but the Kurdish leadership is also wise [and] we don’t jump” toward formally separating from Iraq.

Hussein added, “We have the feeling that the understanding here is different compared to various visits we’ve had to Washington in the past, but it’s up to them [the US government] to announce that.”

The two men had just come from a meeting with Secretary of State John Kerry.

Bakir noted that the Kurds had de facto independence under US protection from 1991 to 2003, and had tried to work since then within a unified Iraq. But the Kurds, he said, had never been treated as partners by Baghdad. “We do not want to go back to a failed experience,” he said.

The Kurdish visitors said Iraq’s neighbors and the entire international community needed to work together to defeat ISIS. Asked by Al-Monitor if the effort might include cooperation between Iran and the United States, Hussein said he had not raised the topic with US officials and they had not raised it with him.

The visit comes as the US Congress is paying increasing attention to Iraqi Kurdistan and appears to be warming to the notion that it may formally separate from Iraq.

Al-Monitor’s Julian Pecquet reports that the House Appropriations Committee last week approved a fiscal year 2015 spending bill that for the first time encourages the State Department to work with the government of Iraq to ensure that economic and security assistance reaches “Kurdistan.” The language, introduced by State and Foreign Operations panel Chairwoman Kay Granger, R-Texas, aims to “support efforts to promote internal and regional stability” and “address requirements arising from the conflict in the region.”

The equivalent Senate panel voted 25-5 the week before in favor of a spending bill that would allow military and anti-drug assistance for Iraq to be “made available to enhance the capacity of security services and for security programs in Kurdistan to address requirements arising from the conflict in Syria.” That bill was written by State and Foreign Operations panel Chairman Patrick Leahy, D-Vt.

Iraqi Kurds have historically benefited on Capitol Hill from their friendly if unofficial ties with Israel. At present, 31 countries have diplomatic representation in the Kurdish city of Erbil. Asked if Israel was among them, Hussein told Al-Monitor, “Not yet.”

Julian Pecquet contributed to this article.