Ankara is finding it difficult to devise a holistic approach to the region’s Kurdish question. 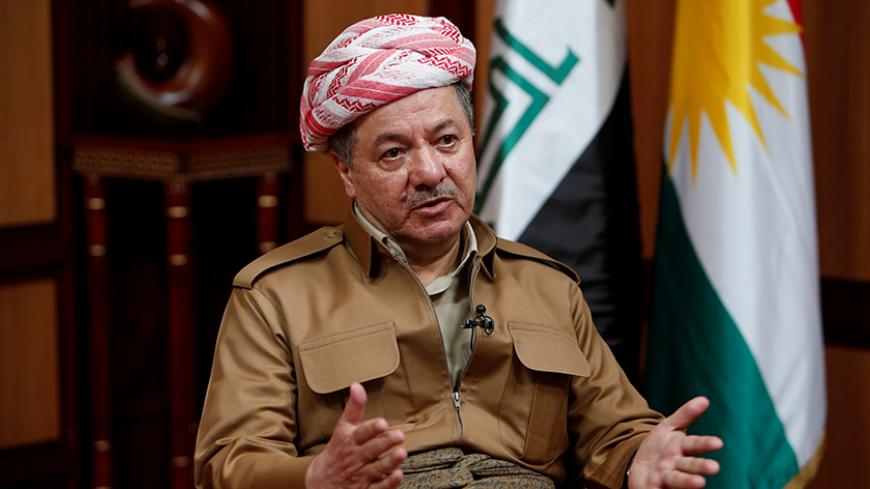 It is not clear whether the Kurdistan Regional Government’s (KRG) independence referendum planned for Sept. 25 will go ahead. KRG President Massoud Barzani says it will, but he faces strong opposition from the West on the grounds that it will endanger Iraq’s territorial integrity. Turkey also opposes the referendum, ostensibly for the same reason, but primarily because of the effect this could have on its restive Kurds.

Many agree, however, that Ankara's response to Barzani’s announcement of the referendum in June was much milder than expected. They point to the strong ties between Ankara and the KRG, from which both sides have benefited. If Barzani were to bow to pressure and postpone the vote, it would be a relief to Ankara, but not lasting. The can would only be kicked down the road.

In a recent article in the government friendly daily Karar, Dalay argued, “Turkey has different policies for different [Kurdish] groups,” citing the Kurdistan Workers Party and its affiliate, the Democratic Union Party (PYD) in Syria (both of which Ankara says are terrorist organizations); Barzani’s Kurdistan Democratic Party (KDP); the Patriotic Union of Kurdistan, led by Jalal Talabani; and the Gorran movement in northern Iraq. Dalay said that in sum, Turkey's piecemeal approach does not amount to a Kurdish policy.

Ankara is clearly caught between a rock and a hard place. It abhors the idea of independence for Iraqi Kurds, but there are considerations it cannot ignore. Iraq’s autonomous Kurdish region was established under US protection, following the 1990-91 Gulf War against Saddam Hussein's Iraq, despite strong opposition from Turkey.

Events beyond its control, though, forced Ankara not only to cooperate with the KRG, but also to turn the situation to its advantage by making the autonomous Kurdish region a major partner in the economic and energy fields. Energy Minister Berat Albayrak warned last week that an independence referendum would have dire consequences for the KRG in terms of energy cooperation with Turkey. “Northern Iraq knows that its only regional ally is Turkey,” Albayrak said.

The problem is that the volume of trade between Turkey and northern Iraq currently stands at around $8.5 billion, and there are billions of dollars’ worth of energy projects being discussed. This disarms Albayrak’s warning, since any steps Ankara takes against the KRG will also come at a steep price for Turkey.

The ruling Justice and Development Party (AKP) and the KDP have also developed warm political ties, which have resulted in close personal ties between Barzani and Turkish President Recep Tayyip Erdogan. Barzani has in the past called on Turkey’s Kurds to support Erdogan, first in general and later in presidential elections, a fact that Erdogan cannot afford to overlook given Turkey’s very large Kurdish minority.

Ankara has also looked to its ties with the KRG when it has had differences with Baghdad. Its relations with the Iraqi government remain strained over a host of issues, including the future of Mosul, which also makes it more difficult for Ankara to come down hard on the KRG.

Having been forced to accept northern Iraq’s autonomous status over time, Ankara may have no option in the long run but to accept the region’s independence, either as a federal entity loosely attached to Baghdad or as an independent territory. This compounds its dilemma, however, begging questions about the future of Syrian Kurds, since independence or a federal arrangement for the KRG will establish a precedent for the Syrians, especially those under the PYD's banner, with which Ankara is at war.

Ankara is already smarting from the support the PYD enjoys from the United States and Russia and the fact that the two key permanent members of the UN Security Council are not averse to autonomy for the Kurds in a unified Syria. Nihat Ali Ozcan from the Economic Policy Research Foundation in Ankara told Al-Monitor, “The general situation in the region makes it important for Turkey to come up with a broad and realistic policy toward the region’s Kurds.” He doubts, however, that Ankara can do so given its limited capabilities. This position of weakness, Ozcan believes, like most analysts, has forced Turkey into a position of only addressing issues as they crop up.

“Because of its limitations, Turkey reacts to daily occurrences but does not have a long-term road map, and I don’t believe it can come up with one,” Ozcan said. “To be able to do this, it has to first understand the realities of the region.”

Ozturk Yilmaz, a former diplomat and current deputy for the main opposition Republican People's Party, agrees. “There is the notion that we can prevent Kurdish aspirations by military means, but the strengthening of the Kurds in the region has shown that Turkey lacks an overall policy in this regard,” Yilmaz told Al-Monitor. “We don’t even know if independence for the KRG is good or bad for Turkey. We have difficulty in acknowledging the Kurdish reality and understanding the other realities that govern the region.”

Yilmaz, who as Turkey’s consul general was held hostage for 101 days by the Islamic State after Mosul fell to the group in 2014, contends that Iran, which is vehemently opposed to the KRG’s referendum, has a more coherent policy. “Call it ‘divide and rule,’ or what you will, that is what Iran is doing, and this is what we lack,” he said.

Iran’s chief of the general staff, Maj. Gen. Mohammad Baqeri, was due in Ankara as Yilmaz was responding to Al-Monitor. It is the first such visit since the Iranian Revolution, and many think the “Kurdish issue” will be the main topic discussed. Yilmaz disagrees, however, believing that Idlib will likely be the focus. The Kurdish question could, nevertheless, force Turkey and Iran to overcome their many differences and cooperate on the Kurdish issue.

Murat Ozcelik, Turkey’s ambassador to Baghdad during 2009-11, said that although Turkey is not a key player when it comes to the Kurdish question, KRG officials still value Ankara's view on the referendum.

“They get confused, though, when they hear a soft tone from the government, and a harsher one from President Erdogan in some of his public addresses,” Ozcelik told Al-Monitor. “This difference in tone shows that there is no coordination in Ankara on this topic.”

Ozcelik also highlighted another quandary for Erdogan and the AKP. “If Turkey opposes the referendum too strongly, its own Kurds will react angrily,” he said, adding that Erdogan is betting on Kurdish voters in the 2019 elections.

Yet another problem for Erdogan is that cooperating with the KRG is still anathema to Turkish nationalists, who are angry over the KRG’s attempts to annex Kirkuk, which they see as a traditionally Turkmen city. This compounds Erdogan’s situation, because he is also relying on nationalist voters in 2019.

Whichever way one looks at it, Turkey’s Kurdish headache is set to continue, not specifically due to developments on the ground, but because of Ankara’s lack of a visionary, long-term approach to the issue.