Lobbying 2015: Iraqi Kurds to US: Don't forget, we were your friends first

The Kurdistan Regional Government has emerged as one of America’s best allies, but will its lobbying operation help it from falling prey to politics now that Iraq and Turkey are more fully engaged in the fight against IS? 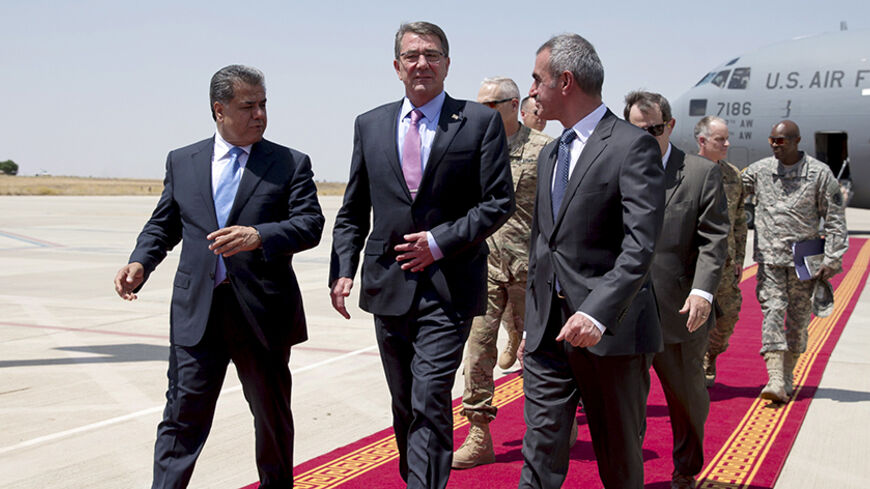 As Iraq and Turkey finally take on the Islamic State (IS), America’s Kurdish friends are determined not to get sold out.

As the first bastion of resistance to last year’s IS onslaught, the Kurdistan Regional Government (KRG) and its peshmerga fighters have a special claim to US support. However, recent battlefield gains by central Iraqi forces and Ankara’s entry into the fray are putting a damper on their dreams of independence.

Tensions erupted late last month when Turkey, after months of US pressure, finally opened its air bases to the anti-IS coalition and began bombing the self-proclaimed caliphate. Ankara, however, unleashed most of its wrath on the outlawed Kurdish activists of the Kurdistan Workers Party (PKK), bombing its bases in northern Iraq amid growing concerns that the PKK’s Syrian affiliate is creating a de facto state along Turkey’s southern border.

The PKK isn’t part of the KRG and its Peshmerga militia in northern Iraq, but the two have joined forces to combat IS.

KRG President Massoud Barzani called Turkish Prime Minister Ahmet Davutoglu shortly after the strikes and “expressed his displeasure with the dangerous level the situation has reached,” according to a KRG statement.

“He requested that the issue not be escalated to that level,” Al Jazeera reported, “because peace is the only way to solve problems and years of negotiations are better than one hour of war.”

“Turkey has continued to come under attack by PKK terrorists, and we recognize their right to defend themselves against those attacks,” State Department spokesman John Kirby told reporters on July 27. “What we’re trying to focus on here is a coalition to go after [IS].”

The Kurds have also suffered some recent reversals in Congress, where both chambers have long shown bipartisan support for their cause.

In April, the House Armed Services Committee provoked a furious backlash in Iraq when it unveiled an early version of its defense bill that stated the KRG and Sunni tribal forces should be “deemed to be a country” for purposes of getting US military aid. The panel quickly removed the offending language after influential Shiite cleric Muqtada al-Sadr threatened to “begin hitting US interests in Iraq and outside it.”

“The Iraqi people must protect their territory through rejecting such statements,” Sadr said. “Otherwise a disaster will occur.”

And in June, the Senate voted down 45-54 an amendment to the Senate defense bill that would have authorized the Pentagon to provide “defense articles, defense services, and related training directly to the Kurdistan Regional Government.”

The bipartisan provision from Sens. Joni Ernst, R-Iowa, and Barbara Boxer, D-Calif., was defeated after a joint lobbying push by the Iraqi Embassy and Secretary of Defense Ash Carter. A similar House bill from Foreign Affairs Chairman Ed Royce, R-Calif., has gone nowhere.

“The Senate amendment … would pit elements of our society against one another and would create a dangerous precedent that would undermine Iraq unity and sovereignty at this critical time,” Iraq’s ambassador to the United States, Lukman Faily, told Politico at the time.

To counter Baghdad’s influence, the KRG is counting on more than just American goodwill. It also has a deep bench of high-powered — and expensive — lobbying and public relations firms on its payroll.

BGR Government Affairs, the firm co-founded by former Mississippi Governor Haley Barbour, was hired in 2007 and has taken the lead on lobbying along with Greenberg Traurig. Qorvis/MSLGROUP focuses on public relations work.

The KRG added Squire Patton Boggs to its stable of influence shapers in 2013 to help get the two leading Iraqi parties off the terrorism list. The contract was terminated on June 30 after the designations were removed in last year’s national defense authorization bill.

In March 2015, the KRG added Dentons, the world’s largest law firm by number of lawyers, to its roster. Dentons US LLP will be paid $20,000 per month for “assisting the [KRG] in strengthening its alliance with the United States, tracking and monitoring legislation in Congress, advocating before the US Government, advising on US policy and providing legal advice and representation on a broad range of matters.”

In addition, the KRG operates a liaison office in Washington, which acts as an embassy of sorts.

The office was set up in 2006 with the express purpose of lobbying for Kurdish interests and establishing a Kurdish Congressional Caucus, which now has about 60 members sympathetic to Kurdish views. The office receives $1.5 million a year from Erbil.

Its efforts have had some success over the past few months, despite the setbacks.

The House defense bill, despite no longer deeming the KRG a “country,” still says the peshmerga should be “directly” given at least $89 million in military assistance earmarked for combating IS. The Senate version doesn’t repeat that language but calls on the Obama administration to provide the KRG “in an expeditious and responsive manner and without undue delay” defense articles and assistance including “anti-tank and anti-armor weapons, armored vehicles, long-range artillery, crew-served weapons and ammunition, secure command and communications equipment, body armor, helmets, logistics equipment [and] night optical devices.”

Both the House and Senate foreign aid bills, meanwhile, instruct the State Department that part of the $261 million requested in the FY 2016 budget for military aid and law enforcement support “should be made available to enhance the capacity of Kurdistan Regional Government security services and for security programs in Kurdistan to address requirements arising from the violence in Syria and Iraq.”