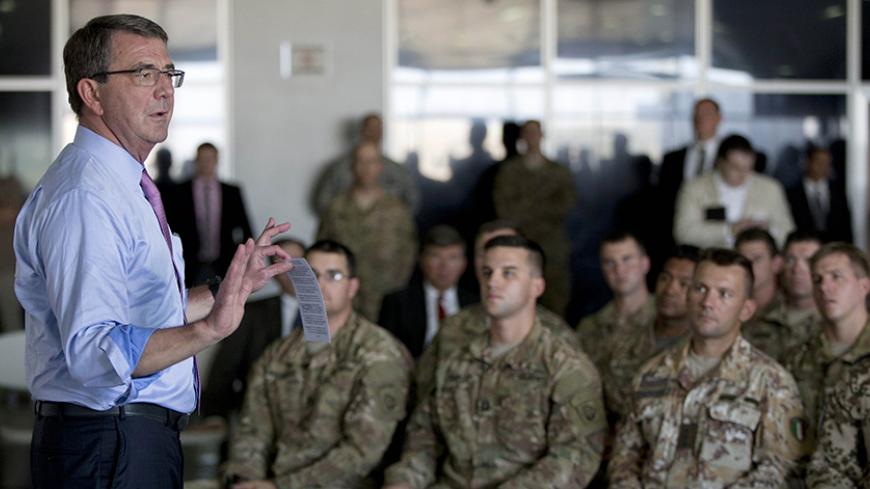 Relations between Washington and Erbil have gotten so tight that the Kurdistan Regional Government's (KRG) security forces are now on Uncle Sam's payroll.

Defense Secretary Ash Carter announced during a visit to Baghdad on April 18 that the United States would be contributing $415 million to pay the salaries and expenses of peshmerga fighters on the front lines of the fight against the Islamic State (IS). The agreement, formalized in a July Memorandum of Understanding (MOU) between Washington and Erbil, came just days after Deputy Prime Minister Qubad Talabani visited Washington with hat in hand.

The Pentagon's quick response is a testament to the close ties that have developed between the United States and the KRG since the fall of Saddam Hussein in 2003. Much of the credit goes to the regional government's liaison office in Washington, established in 2006, and the stable of lobby firms under its authority.

Despite a 50% drop in KRG lobbying expenses in 2015 (from $1.2 million to $600,000, not counting the liaison office budget), due in part to bottom-of-the-barrel oil prices, the Kurds have continued to make inroads with lawmakers in their search for ever-greater independence from Baghdad.

The pending House foreign aid spending bill, in particular, requires that the State Department set aside at least $95 million in Counterterrorism Partnership funding for nonlethal assistance to the KRG. The bill also mandates that Erbil receive no less than 17% — its theoretical share of the Iraqi national budget — of both a $260 million sovereign loan guarantee that the State Department has requested for fiscal year 2017 and a proposed $2.7 billion US loan for Iraq to buy military equipment.

Members of the House Armed Services Committee have been no less supportive. Section 1222 of their authorization bill for FY 2017 calls for directly arming the peshmerga, a policy that is strongly opposed by Baghdad.

"It should be the policy of the United States to support, within the framework of the Iraqi Constitution, the Iraqi Kurdish peshmerga, the Iraqi security forces and Sunni tribal forces in the fight against the Islamic State of Iraq and the Levant [IS],” the bill states. “Recognizing the important role of the Iraqi Kurdish peshmerga within the military campaign against [the Islamic State] in Iraq, the United States should provide arms, training and appropriate equipment directly to the Kurdistan Regional Government."

The bill has forced the Obama administration to once again do an awkward diplomatic dance and try to express support for one of its best allies in the fight against IS while trying to keep Iraq from splintering. The United States officially remains convinced that a unified Iraq remains the best bulwark against extremism, and the White House has threatened to veto the bill in part because of the KRG provision.

"A unified Iraq led by a multisectarian government is a US national security interest, but the bill's approach for supporting the Kurdish forces contradicts stated US policy of countering [IS] ‘by, with and through’ [Baghdad],” the White House said in its Statement of Administration Policy opposing the House bill. “Current policy has not inhibited US support to Kurdish or Sunni forces, who with the Iraqi army have reclaimed territory from [IS] control.”

White House opposition has carried the day in the past, notably last year when the Senate fell short of the 60 votes needed to pass an amendment to the Senate Defense bill from Sens. Joni Ernst, R-Iowa, and Barbara Boxer, D-Calif., to directly arm the Kurds. This year, the Senate passed its version of the bill in June without such a provision, setting up a potential compromise over the issue with the House when lawmakers return from their lengthy summer recess.

Events on the ground may yet force Washington’s hand, however.

In a March interview with Al-Monitor, KRG President Massoud Barzani said he wants to hold a long-awaited referendum on independence by October, before the US presidential election. Such a vote could force the Obama administration to contemplate an option it has long hoped to be able to avoid.

“The president is committed to the united, federal and democratic Iraq that is defined in the Iraqi Constitution,” the White House said last year after being presented with a petition for Kurdish independence that had gained 107,136 signatures. “Our partnership under the US-Iraqi Strategic Framework Agreement will continue to support the efforts of Iraq's political leaders to unify the country and, as part of this commitment, we have encouraged all sides to strengthen their partnerships and to work together to fight against their common enemy.”