Israeli security experts point out that despite severe restrictions on arms sales, Palestinian terrorists can manufacture their own submachine guns and could launch massive attacks — like in Orlando. 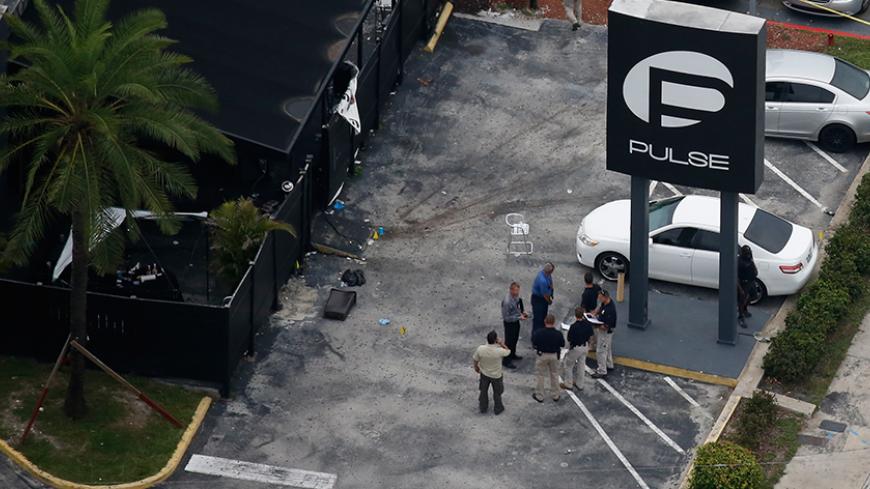 An incident like the June 12 massacre in Orlando’s Pulse nightclub, committed by Omar Mateen, is the ultimate nightmare scenario for Israel’s security establishment. Al-Monitor has learned that the security Cabinet occasionally discusses scenarios in which a terrorist armed with an automatic weapon succeeds in reaching a crowded space and kills dozens of civilians.

The “intifada of knives,” also known as the “intifada of individuals,” which began in Israel in October 2015, recently underwent a serious development in its evolution. Makeshift knives and axes have been replaced by various firearms.

This intifada is not confined to Israel. One minister, a member of Israel’s security Cabinet, told Al-Monitor on condition of anonymity, “This is a global phenomenon, which is taking place in parallel all around the world. Neither Europe nor the United States is immune to the 'spirit of the Islamic State,' which has crossed the waters and is now spreading to the West.”

Israel’s defense establishment also has found many similarities between the assailant who stabbed a French police officer and his partner to death June 13 and Palestinian assailants who stab Israeli civilians. “This kind of terrorism is based solely on an idea,” said one high-ranking defense official to Al-Monitor, speaking on condition of anonymity. “Unlike in the past, there is no physical infrastructure, no hierarchy, no training and no organization. These terrorists did not attend training camps, and they did not receive orders from above. They can be found everywhere — people that have been exposed to the idea of the Islamic State and the call of [Abu Bakr] al-Baghdadi. It is very hard to monitor them. There are no warnings, and for the most part, no warning signs either.”

At a meeting of Israel’s security Cabinet June 10, following the attack on the Sarona complex in Tel Aviv, Internal Security Minister Gilad Erdan brought up the security establishment’s nightmare scenario: a successful “Carlo attack,” which could result in dozens of casualties. The “Carlo” is a small, homemade submachine gun, modeled on the old “Carl Gustav” and manufactured by the dozens on makeshift lathes throughout the West Bank.

Security sources say that over the last six months, there have been five Carlo attacks in Israel. In each of these cases, including the last attack in Tel Aviv, Israel got lucky. Circumstances put an end to the attack before the terrorists were able to kill more people. In two cases, the makeshift gun jammed. In the other cases, the attack was stopped by security guards or armed civilians who were at the scene. At the Sarona complex last week, a clip full of bullets fell out of one assailant’s rifle, while the other assailant was shot by a security guard on the scene.

A high-ranking Israeli security source told Al-Monitor on condition of anonymity, “So far, when it comes to these kinds of attacks, the main difference between the situation in Israel and the situation in the United States is the availability of guns.” What he means is that in America, all anyone who wants to commit an attack with mass casualties has to do is go to a gun store and buy himself a submachine gun, just like Mateen did. In Israel, firearms are heavily supervised, and it is impossible to buy guns in stores. Obtaining a pistol license is a complicated and painstaking process that just a handful of individuals manage to complete. The only option left for Palestinians who plan an attack is to obtain a rifle or submachine gun on the black market or, alternately, to get their hands on a homemade Carlo. So far, all the Carlos involved in recent terrorist attempts were immobilized prematurely in one way or another — either mechanically or through Israeli security agents stopping the assailant.

Four Israelis were killed in the Tel Aviv attack. According to a security source who talked to Al-Monitor on condition of anonymity, “If the clip hadn’t fallen out, and if the security guard hadn’t responded quickly, the incident could have resulted in dozens of casualties.” A few days later an incident just like that happened at the Pulse nightclub in Orlando. For the Cabinet, it served as a chilling reminder of what could happen to Israelis as well.

Israel has already developed its own methods to reduce the phenomenon. Until the last incident in Tel Aviv, the current wave of terrorism had subsided significantly. The Shin Bet and the police developed special programs and algorithms to patrol social networks. In dozens of cases, web surfers who expressed support for the Islamic State's (IS) ideology or an intention to commit an attack were identified beforehand, and the attacks were prevented.

“In this situation, it is impossible to reach a 100% success rate,” explained one senior figure in Israel’s defense network, talking on condition of anonymity. “It could happen to anyone. Any civilian who was brainwashed by that murderous ideology and the insane ideas of the Islamic State could get up out of nowhere, pick up a knife or submachine gun and set off on a killing spree.”

The similarities between Mateen, the Orlando terrorist, and Nashat Milhem, the terrorist responsible for the attack at a Tel Aviv pub on Jan. 1, show something else as well. Mateen was, possibly, a frustrated homosexual, who went to the Pulse regularly. IS brainwashing brought this conflicted soul to his final apocalypse by getting him to commit the horrible massacre in the nightclub he frequented. Milhem, an Israeli Arab from an Israeli Arab village in the Wadi Ara region, was a petty criminal and drug user who was intimately familiar with Tel Aviv and its nightlife. He also succumbed in the end and went on a rampage in the streets of Tel Aviv, using an old Falcon submachine gun that he stole from his father. Milhem killed three people before he fled the scene. He was shot by the police a week later. According to Milhem’s plans, his attack would have ended with many more casualties had circumstances not prevented him from continuing his killing spree, which started at the Simta pub on Tel Aviv’s high-profile Dizengoff Street.

How can this kind of terrorism be prevented? The best minds in the world and all the security forces in the West are now focused on this. The problem is that unlike organized, affiliated terrorism, this is a fight against ghosts. “There is no way to kill all the mosquitos,” said a senior source in Israel’s security establishment, talking on condition of anonymity. “We have to dry up the swamp instead.” Such steps are expected to take a long time. Ultimately, this is a fashion, a trend, a murderous revolution, which is winning supporters among the young, and particularly among second- and third-generation members of families, who left the Islamic lifestyle and migrated to the West.

''Just like any new trend, all anyone can do is wait for it to pass. It will happen in the end,” a former senior member of the Shin Bet told Al-Monitor on condition of anonymity. “Until then, it is important to remember that there is no such thing as perfect security anywhere. The problem can emerge at any given moment.”