Israel's policy of expelling released prisoners outside the West Bank has only encouraged them to resume terror activity. 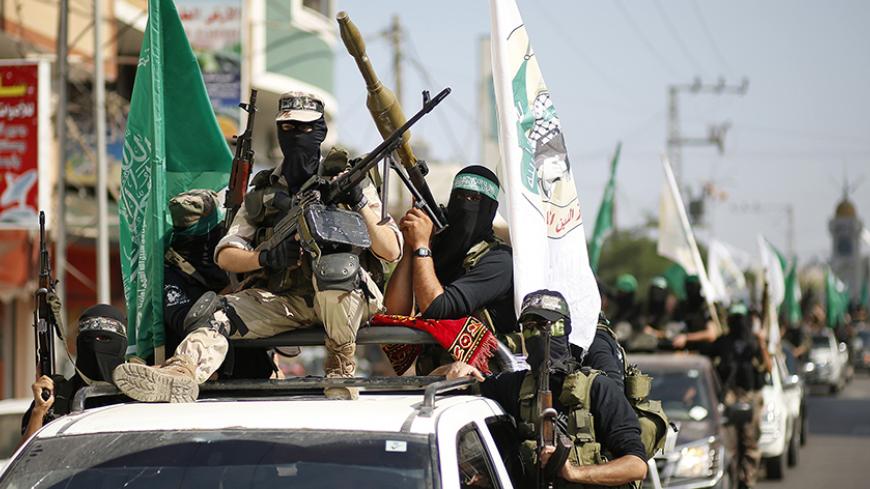 Hamas militants take part in a march through the streets of Gaza City, marking the anniversary of a prisoner swap deal between Israel and Hamas, Oct. 18, 2012. - REUTERS/Mohammed Salem

It took the Israeli Shin Bet only three weeks to arrest the members of a terrorist cell suspected of having carried out the June 30 attack near the Alon Shvut settlement in which Malachi Rosenfeld from the settlement of Kochav Hashahar was murdered and three others were wounded. It was apparently also that same cell that fired shots at an Israeli ambulance in the area of the West Bank Beit El settlement two days earlier.

When the members of the cell were arrested, two facts came to light, pointing to Hamas’ current modus operandi in the West Bank. The first one is that the fingerprints of Salah al-Arouri, who set up a Hamas headquarters in Istanbul, are repeatedly present. The second one is the current involvement of many prisoners released in the 2011 Gilad Shalit prisoner exchange deal, who have resumed their terrorist activities under Arouri’s baton.

The person who directed the cell that mounted the terror attack at Alon Shvut is Ahmed Najar. As a condition for his release in the Shalit deal, Najar was deported to the Gaza Strip. He later moved to Jordan and since then has been plotting terrorist attacks across the West Bank. Incidentally, two of his relatives — his brother Amjad from the neighborhood of Silwad in Jerusalem and his father-in-law, Jamal Yunis — were two of the operatives in that cell who were remunerated for their willing participation.

The arrest of the cell, among other things, exposed the close and effective cooperation between Israel’s security forces and their Palestinian counterparts. Unlike in the past, the Shin Bet publicly disclosed this security cooperation. According to the Shin Bet, some of the cell’s operatives were apprehended by the Palestinian security forces, chief among them the leader of the cell, Mu’ad Hamed, who was the one who fired the shots. Over the past month, the Palestinians have rounded up some 250 Hamas militants in the West Bank in the aftermath of a series of terrorist attacks against Israel at the end of June.

The Najar cell that was arrested this month is part of a much broader scheme that is headed, as noted, by Arouri. The journey he has made from the time of his deportation from Israel in April 2010 should raise a red flag in the Israeli defense establishment, specifically in connection with its leading doctrine that if Israel is bound to release prisoners, it should deport them outside the West Bank. In the setting of the Shalit deal, 40 prisoners were expelled to Turkey and some 160 to the Gaza Strip. According to the Egyptian-brokered deal, some of the deportees would be allowed to return to the West Bank following a gradual probation period.

Arouri, one of the founders of Hamas’ military wing in the West Bank, used to reside in Ramallah. In May 2007, he was put under administrative arrest. Three years later, when he was about to be released, Israel refused to let him return to Ramallah. Arouri asked to be transferred to the Gaza Strip, but his request was denied. The defense establishment recommended that he be expelled outside the territories, assuming that his presence there would be dangerous for Israel. He would later proceed to set up headquarters in Turkey; this office to a large extent independently orchestrates terror attacks in the West Bank and funds the infrastructure of Hamas militants in the West Bank.

It is in this way that the “West Bank headquarters” was set up in Gaza. Hamas militants in the Gaza Strip, some of whom were released in the Shalit deal, were recruited by Arouri and his proxies in order to set up operational headquarters that would rebuild the infrastructure of Hamas’ military wing in the West Bank.

The bottom line is that Israel’s working premise — according to which "heavyweight" prisoners are to be expelled to the Gaza Strip upon their release — has been proven to be wrong. Keeping them at a distance doesn’t keep them away from terror. Moreover, banishing them to Gaza further motivates them to resume their terrorist activities.

When kept away from their families and homes, deported prisoners face social pressure. There, in Gaza, they have to prove that they haven’t lost their power or standing and that they deservedly earned the epithet "bataleh" (hero). In the absence of social and occupational alternatives, the deported prisoners in Gaza have no choice but to take Arouri up on his offer to play an active role in the West Bank headquarters — the area to which they cannot return.

Deporting the heavyweight prisoners to Gaza has another substantial drawback. In Gaza, they are far away from the watchful eyes of the Palestinian security forces as well as the Shin Bet. More than likely, if the West Bank headquarters had been set up in the West Bank, Israel and the Palestinian Authority — which have demonstrated effective cooperation in the past — would have nipped it in the bud.

It seems that the West Bank headquarters, which spans the Istanbul-Gaza axis and is based on the infrastructure established by the prisoners released in the Shalit deal, will continue to operate almost uninterruptedly and serve as a significant security challenge for the Israeli and Palestinian security forces alike.

The involvement of the prisoners released in the Shalit deal in planning and executing terror attacks once again raises, and more forcefully so, the dilemma of the “price” for releasing a prisoner of war who is held captive by Hamas’ military wing in Gaza.

During his years of captivity (2006-11), abducted Israel Defense Forces soldier Shalit became an “Israeli obsession.” The wide-scale campaign for his release was incomprehensible by any standard. It sent Hamas a message, and rightly so, that showing resolve and persistence pays off, as was indeed the case. In the end, Israel conceded to most of Hamas’ demands, releasing more than 1,000 prisoners, most of whom were Hamas militants, and some were heavyweight prisoners with “blood on their hands [indicted for murder].”

Since the release of prisoners in exchange for one kidnapped Israeli soldier, six Israelis have already been murdered by those released in that deal. On April 14, 2014, on the eve of Passover, Lt. Col. Baruch Mizrachi from the Israeli police was murdered by Ziad Awad, who had previously served time in an Israeli prison for murdering Palestinians suspected of collaborating with Israel. He was released in the Shalit deal. Awad operated independently without having an organized infrastructure and without getting assistance from any organization or movement. To carry out the murder, he recruited his 18-year-old son Izz ad-Din Ziad Hassan.

A year later, a terrorist cell — whose members, as noted, were released in the Shalit deal and whose mastermind is the Turkey-based Arouri — murdered Malachi Rosenfeld. There’s one conclusion to be drawn: If Israel is forced to reach another prisoner deal with Hamas — for example, in order to free its citizen Avraham Mengistu held in Gaza — the notion of deporting prisoners or administrative detainees should not be entertained. It has been shown that deporting them doesn’t keep them away from terror, but quite the opposite: It may encourage them to re-engage in it.